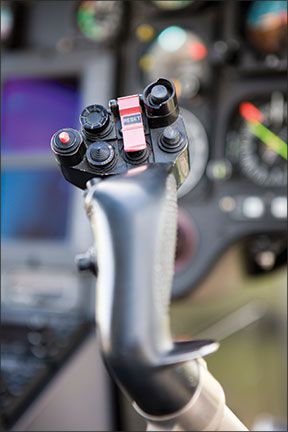 We all have been there. You’re on a certificate or rating checkride and you make one little mistake—nothing huge, nothing that puts the outcome of the flight or the practical test in jeopardy—yet. The examiner, who has been discreetly scribbling away on a notepad throughout your performance, ticks something off, but shows only a carefully schooled poker-face. You don’t hear, “Stop the flight.” So you continue. But you get a little rattled. Come on, everyone does! The examiner doesn’t care, though. What you do next is the important part: Can you stop the fault-chain you triggered with your first error?

In the classic example, whatever you just did is the first link in a cascading series of events leading to an accident, incident or perhaps simply some event that shouldn’t happen. What comes next varies, but will ultimately lead the pilot—that’s you—to react. How you react also varies, and usually takes one of three paths: panic, tunnel vision or a calm, cool, collected series of steps leading to fixing the problem and resuming a safe flight. This latter reaction is known as breaking the accident chain, and that’s what we’re here to discuss. To roll things back to where and how they should be, you sometimes need to push the reset button. What? There’s no reset button on your panel? Welcome to aviation.

The Reset Button
It would be wonderful if breaking the fault chain was as simple as quelling an irascible computer program. The Ctrl/Alt/Del maneuver was my favorite key sequence on a Windows machine, while Mac users love/hate its counterpart Option/Command/Esc. But I sometimes managed to foul up things so badly even those keystroke combinations wouldn’t work. Enter the reset button. Once upon a time, it was an actual spring-loaded button on the back of a bulky desktop. Today, it’s the power switch.

And a reset button of sorts often can be found on some of the equipment in your panel: Some of the avionics can handle having the circuit breaker pulled or the avionics master cycled. You may have to wait for the ADHRS and/or GPS to “find” themselves again, but you’ve effectively rebooted the panel by cycling them off and then back on. (It’s too bad they don’t come with the equivalent of Apple’s Time Machine to let you revert settings back to where the equipment last functioned well. It’s also too bad the pilot’s brain doesn’t naturally work that way, either.)

Actually, sports psychologists think the brain does have a reset button of sorts. It is just a matter of training to find it. Neuroscience research has proven what monks—Buddhist or otherwise—have known intrinsically for centuries: In tense moments the mind needs to focus, and can be trained to focus, but it does so at the expense of another talent every pilot must master to some degree: multitasking.

Other research demonstrates that multitasking in the human brain is a misnomer. What our brains are really doing is more akin to the swap file on a computer hard drive. We divide our brain’s bandwidth over and over as we juggle our attention from item to item, faster and faster. The catch is we’re paying less and less attention to more and more. You easily can see where I’m going with this. It is surprising that in a complex cockpit we can focus at all.

Add the typical chain of incidents that can lead to an aviation accident into the mix above. The key to saving the day lies in the pilot’s ability to focus on the first fault, understand it, fix it and move on—all while continuing to ensure the aircraft flies on course, altitude and speed. The pilot has no time for panic, no time for brain freeze. Indecision with a ticking clock is a very bad thing. It’s also very real.

Pilots need to use the tools they have at hand with a practical and practiced deliberateness to save the flight. That’s what every flight examiner is looking for when he or she introduces a fault into the checkride flight, confusing the candidate.

Focus
And the confusion is easy to create. Lion tamer Clyde Beatty lived to a ripe old age simply by bringing a perfectly symmetrical four-legged chair into the ring with him when meeting his big cats. While he held a chair in front of the lion’s face, the lion tried to focus on all four legs of the chair at the same time. With its focus divided, the lion became confused and was unsure what to do next. When faced with so many options, the lion chose to freeze and wait instead of attacking.

Human brains work the same way when inundated with conflicting information. Imagine how that plays in IMC when your panel lights up with a caution light, or a series of cascading failures. How about when that beautiful Garmin 1000 goes blank? Can you concentrate on the problem while flying the airplane?

Researchers have identified four different types of concentration: Broad-external attention is good for assessing the total environment. When used inappropriately, however, it can lead you to miss things because you’re being distracted or paying attention to something that’s not relevant.

Broad-internal attention is good for developing a game plan or strategy. But when used inappropriately, it can lead you to think too much, resulting in “paralysis by analysis.”

Narrow-external attention is good for focusing on a single, primary target and blocking out distractions. The problem is when it’s used inappropriately, it can lead you to be so focused on one thing that you miss something else that’s important.

Finally, there is narrow-internal attention, which is good for focusing your thoughts on several mental skills, such as body awareness, energy management, or imagery. The downside is when used inappropriately it can cause you to “choke.”

Harnessing these four types of concentration, which are described more fully in the sidebar above, and tapping into the one you want in the moment is an art both studied and practiced extensively by elite athletes, and we can learn from them. To practice concentration, it is best to start in a quiet place, then work your way into practicing where there are lots of distractions (best for learning how to tune them out, and for discovering when to tune them in, too). Interestingly enough, this process also describes both primary and advanced flight training.

Know what to Fix
You can do it, but practice can be key. Just like the monks, you have a tool that will help you—the aircraft checklist. You’ve memorized the emergency bold items, but the odds are that is not going to be the fault that starts the chain reaction. So make sure your emergency checklist is in reach and ready to be accessed to help you assess a low-voltage or low-vacuum situation, abnormally high CHT/EGT indications, fuel flow anomaly, smell of burning insulation, pressurization problem, door opening, stuck flap, landing gear misconfiguration—you name it. The steps required to troubleshoot them all is described in the appropriate checklist.

Is the problem more human in nature? Perhaps you’ve been flummoxed by a complicated clearance delivered at auctioneer speed? Ask the controller to read it again, slowly, and write it down in its component parts (cleared to, via, altitudes, frequencies and squawks on separate lines). Sometimes the fix is as simple as resetting an actual switch. Say your alternator has failed, do you need to switch to your backup? Do you have an emergency bus?

Perhaps the problem is more in line with a simple mistake. In my airplane, for instance, one toggle switch determines if the autopilot navigation source is the GPS 1 (panel-mount) or GPS 2 (EFIS-embedded). I often set up the approach in GPS 1, but fly the vectors using the EFIS. That doesn’t work if the toggle switch is in the wrong position, and it’s easy enough to miss if I’m not using a checklist for the procedure.

Many aircraft today have hybrid cockpits, half-digital, half-analog, and the electrical rigging to make it all work can be even more complicated. There’s nothing more confusing to a pilot in the heat of the moment than watching the autopilot take him in a direction he did not command. I’ve seen pilots literally fight the autopilot, under brain freeze, before realizing all they have to do is hit the disconnect button on the yoke and rethink the setup or hand fly the airplane.

On our checkride example, correcting a fault might be as simple as running the complete checklist: I once stopped an engine from “failing” on a non-precision approach when I set the fuel selectors properly as part of my landing checklist, much to the chagrin of the examiner who had turned off one of them.
Consider this, as well: Sometimes your checklist will tell you what isn’t going to work, in which case, as Sullenberger and Skiles did, you move on to the next checklist that will work, be it the rough field landing or ditching checklist. You gotta know when to fold ’em and get your bird back to sea level, too.

Takeaways
What’s important in the takeaway from all this is understanding that you, the pilot, have the power to do what you need to do to solve any in-flight problem. That’s what a pilot examiner is watching to see you demonstrate on a checkride. Remember, though, that the trick is not in demonstrating your multitasking prowess; it’s in how well you know your bird and how well you can channel that knowledge in the moment by focusing on the tasks at hand.