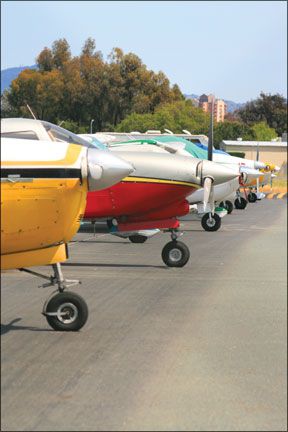 Every pilot, to one degree or another, spends time contemplating risk management. While aviation is known to be potentially risky, most aviators adopt the strategy of actively managing risk as a means of minimizing the exposure to danger. Each and every flight involves a series of choices and judgments, either conscious or not, that ideally insures the safe completion of the flight. Outside the cockpit, we spend a significant portion of time reading accident reports, attending safety seminars or even going through the new FARs. Virtually every aspect of flight safety is scrutinized. I say “virtually” since there is one area which is generally given very

little consideration. That is what happens on the ramp.

How safe (or dangerous) is it to be in the vicinity of an airport ramp? It is exceedingly difficult to derive a useful statistical comparison (like fatalities per 100,000 flight hours) since there is a broad spectrum in ramp activities; from a sleepy grass strip where hand-propping might be the greatest danger, to a large metropolitan airport where the intensity of activity can appear to create a blur. The risks and frequency of events are likely to be completely different across the spectrum of airports. However, knowing what has happened to other pilots and operators might make you pause to think next time you walk across the apron while talking on your cellphone or glancing at the likely departure procedure. Instead, we need to recognize the hazards of being in an area where bad things can and do happen, and then look at the ramp in different way.

To better understand the risks faced by ground crews in busy, commercial airports, Grabowski, Baker and Li in 2005 published the results of their study, Ground Crew Injuries and Fatalities in U.S. Commercial Aviation, 1983-2004 (Aviation, Space and Environmental Medicine 76(11):1007-1011, 2005). In their study, the National Transportation Safety Boards (NTSB) database was searched for ground-crew injuries occurring during the landing, taxiing or standing phase of commercial flights. In the 22-year period studied, the authors uncovered 80 ramp-related accidents, involving a total of 98 ground-crew members. There were 21 recorded fatalities.

The majority of the accidents (64 percent) occurred when an aircraft was in its departure phase of flight; nearly half of the accidents (49 percent) occurred while the aircraft was in motion. With the number of people and vehicles (including heavy equipment) congregating in a small area around commercial aircraft, its no surprise 43 percent of the accidents involved vehicles colliding with aircraft. Non-fatal accidents frequently involved moving vehicles (including wing walkers being run over by the aircraft), jet-blast mechanisms or fire (cargo hold and equipment.)

Ten of the 21 fatalities resulted from a ground-crew member contacting a spinning propeller. Six fatalities were due to vehicles contacting an aircraft, while three involved heavy equipment. The remaining two fatalities involved mechanics: one who was struck by lightning and the other killed by an over-inflated tire, which failed.

The Grabowski, et al., study nicely summarized the kinds of incidents that occur on busy airport ramps. But the aggregated data, while powerful in its own right, does not really convey the human element of the risks people face while working and moving around aircraft. Building on the studys foundation, what follows are some case reports selected from the NTSB and the Occupational Safety and Health Administration (OSHA) databases. These accident/incident reports occurred within the last 10 years and were selected for their educational value. They highlight the dangers pilots, ramp workers and others face while working in or transiting the ramp area.

The danger of being around a spinning propeller or a helicopters rotors is obvious. Often this danger is discussed during the first day of flight training. However, these serious, often fatal, accidents continue to occur:

In one event taken from NTSB data, a lineman was seriously injured when he inadvertently walked into a turning propeller while undergoing ground operations prior to the night flight. The pilot stated that, as the airplane completed both engine starts in preparation for the flight, the employee quickly approached the airplane to unplug the ground power unit and crossed beneath the left wing from forward to aft, retrieving the left main landing gear wheel chocks. While recovering the left wheel chocks, the lineman was struck by the left engine propeller blade, sustaining serious injury.

An event documented by OSHA occurred at 6:20 pm local time on February 21, 1999: “Employee #1 was preparing to direct a single engine Piper Saratoga…from its parking place…to the proper ramp leading to a runway. Prior to the aircraft starting to move, Employee #1 walked into…the spinning propeller. The blade struck the left side of his head in two locations, decapitating him. Employee #1s left arm was also amputated at the shoulder.”

Another sad entry in OSHAs database occurred at approximately 12:01 am on January 22, 2001: “Emplyee #1, a security guard, was securing the…pad as the Air-Evac helicopter was preparing for takeoff. Employee #1 voluntarily offered to remove the starting unit from the pad. Employee #1 took the cart from the side of the aircraft and proceeded to the rear of the helicopter. Employee #1 apparently bent over to clear the tail of the craft but was struck in the head by the tail rotor. Employee #1 was killed.”

Notice each of these three accidents occurred at night, in low light conditions. Imagine how difficult it is to see a spinning propeller or helicopter rotor under these lighting conditions. This is one reason its critically important to follow recommended procedures and illuminate the rotating beacon (or strobes, in some aircraft) when engine(s) are running (see the FAAs Aeronautical Information Manual, para. 4-3-23d).

Proper training of ground crew is rarely under the control of the pilot. For example, do you know how much knowledge or experience the person operating your local FBOs fuel truck has in working in the ramp environment? Just how savvy is the person you are asking to disconnect the battery cart, after you try to jumpstart your airplane? What about hand-propping? Is it safe for this individual to be doing the hand-propping, be at the aircraft controls or even pull the chocks? It pays to be especially cautious and vigilant when you are doing something out of your ordinary routine, such as external battery starts or hand propping or towing an aircraft, etc. Like many other aspects of aviation, it is in your ground crews best interest (and yours) to keep a careful eye out for any and all activity around your aircraft.

As emphasized in the Grabowski study, vehicles on the ramp constitute a significant hazard. Drivers are often more concerned about not running into expensive aircraft than worrying about not hitting pedestrians. Pilots on the ramp are engrossed in the task at hand and may not be watching where they are walking, or aware of who is around them.

In one example, according to OSHA, an employee was standing with her back to a fuel truck as it finished refueling an aircraft. She was killed when the vehicle backed up into her. The fuel truck did not have a spotter.

Having a fuel truck “spotter” at most general aviation fields is almost unheard of. How often have you gone about your business while your aircraft was being refueled? Everyone has read of misfueling accidents (a piston aircraft fueled with Jet-A) or observed improper grounding prior to fueling, or heard of a truck backing into a parked aircraft. Perhaps, making a point to converse with the fuel truck operator (while observing the fueling process) might be pleasant and not a complete waste of time.

Any time fuel (in the aircraft tanks, in the fuel truck or on the ground) and a myriad of ignition sources are in one place, problems are bound to occur:

“The pilot applied primer and began to start the engine. He heard a backfire and flames emitted from the engine. He continued the engine start attempt; however, the flames became too excessive and the pilot and passenger were forced to evacuate the airplane. Post accident examination by the FAA accident coordinator showed no mechanical malfunctions.” That ones from the NTSB.

A fire-related event also was recorded by OSHA: “Employee #1 and two co-workers were working on a leak in the left fuel tank of an aircraft. After placing a patch over the hole they poured a sealant containing methyl ethyl ketone into the tank to seal the hole. The coworkers left the area. Employee #1 continued the sealing operation by using an electric hair dryer to speed up the drying process. Shortly thereafter, an explosion occurred and the aircraft caught on fire. Employee #1 suffered severe burns…and died several days later.”

When was the last time you reviewed the emergency checklist for “Ground Fire During Engine Start”? Certain emergency checklists must be committed to memory. This usually means frequent review of these procedures. Consider using guided visualization techniques when reviewing emergency procedures (i.e., vividly picturing yourself going though the motions of the actions you are reviewing). This can be challenging and fun. By actively involving your brain, retention improves.

Sometimes, according to the NTSB, even careful, conscientious pilots can do things that result in a bad situation on the ramp: “The pilot stated that the battery was not strong enough to turn the engine over, so he pulled his car up and attached the jumper cable to the outer jump device. He started the engine, reduced power to idle and applied the parking brake. He waited thirty seconds to a minute to ensure the airplane was not capable of moving. He left the cockpit, removed the jumper cable and climbed on the wing to re-enter the cockpit. As he was climbing on the wing, the parking brake let loose and the sudden movement caused him to lose his balance and fall off the wing. Before he could catch the aircraft, it clipped one aircraft near the propeller and ran into the second aircraft at less than five miles per hour.” Are you generally aware enough of your surroundings as you work on the ramp, that you would see this aircraft taxiing toward you?

Working in and around aircraft on an airport ramp is clearly hazardous. While the risk of injury or death increases with the size of the aircraft and the intensity of ramp activity, the nature of what occurs on every ramp, at every airport, should make one pause before entering the ramp area. It is natural to lower your guard when you think you are in safe, familiar surroundings. The airport ramp is not such a place.

Joe Romson is a physician and pilot based on the West coast.