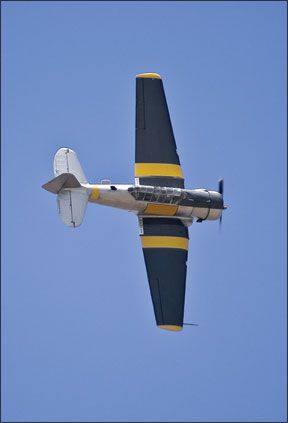 I spent a weekend recently helping prepare a pilot for his commercial pilot practical test. He is a long-time instrument pilot and highly experienced in his turbocharged Beech Bonanza. One of the hardest parts of his training was getting him to bank beyond a standard-rate turn-everything hed practiced for years involved making small control inputs, and he needed to regain comfort with the more dynamic maneuvering required for the test.

As we practiced steep turns, getting closer and closer to halving the minimum practical test tolerances, the question came up: Besides demonstration of a “circus trick” in order to earn his commercial certificate, what is the purpose of performing steep turns? Its a good question many students and rated pilots ask, and one deserving a detailed response.

Steep turns teach a great deal more than just how to make a level, 360- or 720-degree circuit. Mastering the steep turn will help you:

Avoid stalls in the traffic pattern;

Recognize the hazard of accelerated and cross-controlled stalls;

Understand why circle-to-land approaches are considered so risky;

Increase the speed and accuracy of your instrument scan; and even

Better respond to an engine failure.

Thats a lot of learning from what many consider a “circus trick” to be demonstrated on a checkride and never flown again. So lets look at the real-world lessons of a steep turn.

If altitude is kept constant, stall speed increases at the rate shown in the table on page 20. For example, an airplane that stalls at 50 knots indicated in level flight and zero bank angle will stall at about 53 knots in a 30-degree bank. Enter a steep turn and that same airplane will stall at about 61 knots in a 45-degree bank, and 71 KIAS in a 60-degree bank. The normal final approach speed is 1.3 times the stalling speed, so reference speed for the airplane with a 50-knot stalling speed would be 65 knots. Bank just a hair beyond 45 degrees and the airplane would stall at the “book” final approach speed. No wonder we were all initially taught to keep bank angles shallow in the traffic pattern!

This warning isnt entirely justified, however, because normally were also descending in the traffic pattern, which unloads the wing and relieves the g-load. But pilots get into trouble when they get too low in the pattern, and/or overshoot the turn to final. If you bank excessively in the pattern while trying to hold altitude, the wing may enter an accelerated stall. If you cross-control the airplane (bank one way, rudder the other), one wing can stall before the other, and the airplane can snap over into a spin with little warning. This is even more reinforcement of our instructors admonition to keep the bank angle shallow in the traffic pattern.

Fly steep turns in both directions and note the amount of back pressure needed to hold altitude in left-hand vs. right-hand turns. In a single-engine airplane or a twin without counter-rotating propellers, most pilots agree it takes more elevator to keep the nose up in a left steep turn than in one to the right. Why is this? When banked steeply to the left, the left-turning tendency of the propeller(s) is pulling the airplane downward, requiring more elevator deflection to compensate. That increases drag and destabilizes the maneuver even more. In a right-bank steep turn left-turning tendency is actually trying to reduce the bank angle, meaning you need to add a little more roll input, but not nearly as much back pressure to hold altitude. The effect is more pronounced in some airplanes than it is in others.

If youre lucky enough to be flying something like a deHavilland Tiger Moth or Chipmunk with an engine that turns “the other way,” the effect is reversed. If youre flying a light twin with counter-rotating propellers, the control requirement will be the same in either direction of bank.

The important point here is that, especially in a left turn, a steep turn left unchecked will try to get steeper still. In most airplanes, if the pilot does not apply the correct amount of back pressure or opposite aileron, the aircraft will naturally and quite rapidly descend in an ever-tightening circle with a dramatically fast increase in airspeed and vertical speed. The airplane can develop a rate of descent in the hundreds to thousands of feet per minute, and airspeed may quickly accelerate through the yellow arc to red line (VNE) and beyond. A steep turn is the genesis of the “graveyard spiral” and, in turn, is implicated in most in-flight break-ups when a pilot gets disoriented by turbulence or an inadvertent cloud penetration.

What else can this teach? Altitude loss comes rapidly in a steep turn, especially to the left. Where do we have the greatest number of traffic pattern accidents? Base turning to final, which almost always is a left-hand turn. Whats considered one of the riskiest instrument maneuvers? A circling approach, which is by definition a low-altitude, close-in (read: tighter turns) traffic pattern in poor visibility, in almost all cases with turns to the left. Just a little distraction in the turn to final or a circle-to-land maneuver, and that airplane can descend that last 500 feet into terrain in a matter of seconds.

What did your primary flight instructor teach you about traffic pattern turns? “Keep the bank angle below about 20 degrees.” Why? In part, so if youre distracted you wont inadvertently spiral into the ground. I personally feel that many of the accidents we think of as “stall/spin” during the downwind-to-base or base-to-final turn may in fact be spirals that develop so quickly the pilot cant recover in the altitude available.

Ask instrument pilots to name the riskiest instrument flying maneuver and many will tell you, “a circling approach at minimums.” The circling portion of a circling approach is essentially a visual traffic pattern usually flown lower than pattern altitude, and closer to the runway than many pilots fly in order to keep the airport in sight in the conditions requiring a circling approach in the first place. This low, tight approach means pilots will be tempted to fly steeper, tighter turns at a relatively low speed-repeating the risk of an accelerated or cross-controlled stall.

If the pilot is focused on the runway and not necessarily on attitude in circle-to-land turns, the airplane can slide into an incipient spiral, and lose altitude rapidly. That this begins at a point when there isnt any altitude to spare is the problem. These risks are why circling approaches have such a bad name, when if flown properly they are a useful instrument flying technique.

Roll into a steep turn. Look at how little you actually have to move the controls. Knowing that a little control input goes a long way is a good lesson to learn before you find yourself flying partial panel in IMC. Practicing steep turns can actually help you survive the loss of an attitude indicator in the clouds. In fact, Ive found steep turns are a very good indicator of the effectiveness of a pilots instrument scan, with or without the attitude indicator. You cant fly precise steep turns by reference to instruments unless you have a rapid, effective scan, interpret what they indicate and control the airplane. As a consequence, I use steep turns early in an instrument proficiency check as a barometer of sorts, to determine what my student needs to practice.

Engines quit and pilots die. Most engine failure-related fatalities result not because the airplane goes down, but because the pilot stalls the airplane and loses control in his/her zeal to get the airplane on the ground. Familiarity with steep turns teach attitude, bank and rudder control, so that stall avoidance might be more instinctive on that worst of days when an engine fails. Banking to the 55-degree bank steep turn in an engine-out glide, in fact, is one of the maneuvers on the commercial pilot practical test. Certainly, good stick-and-rudder skills are vital to landing out of an engine failure, and steep turns are one of the best ways to sharpen your aircraft control.

Maybe somebody knew what they were doing way back when the steep turn became one of the “circus tricks” we have to demonstrate on the test for every pilot certificate. For though it isnt something most of us do outside the realm of flight training and evaluation, mastering the steep turn does a great deal to prepare us for real-world flying.