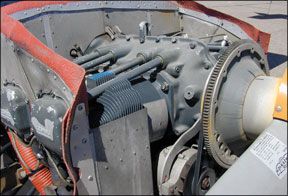 The modern piston-engine airplane is really a technological marvel. For not

that much more in fuel than a large SUV, one can operate an airplane in and through most weather conditions, over long distances and with navigational accuracy unheard of just a few years ago. At our fingertips are all kinds of aeronautical data and weather graphics. We have airborne sensors alerting us to thunderstorms and nearby airplanes. With the right equipment, we can send e-mail or make telephone calls, all from the comfort of our left seat.

Thats the good news. The bad news is that-with notable exceptions like the Cirrus, Columbia and a too-small handful of others, the airframes havent improved much since the 1930s. But the really bad news is that-despite small refinements here and there and enlightened ways to operate them-the engines havent improved, either. Sure, turbo diesels like the Thielert show great promise and amazing efficiencies can be achieved, even with standard fare from Lycoming and Continental. But piston aircraft engines too often remain a troublesome collection of spare parts flying in close formation, searching for a Zip Code in which to begin an NTSB investigation.

According to the AOPA Air Safety Foundations 2006 Nall Report, 16.2 percent of all accidents and 7.5 percent of fatal accidents in 2005 were traced to a cause involving mechanical failure or improper maintenance. What are some of the trouble areas involved with operating these engines and what can we do to help enhance their reliability along with our safety and longevity?

For all our (well, my…) griping and complaining, piston aircraft engines actually do a pretty good job, especially considering their size, weight, simplicity and power output. Try coaxing the engine in your new Lexus or BMW to run at 75 percent power or higher for five or six hours at a time. Keep fuel flowing to your aircraft engine, change the oil and perform other routine maintenance tasks and itll generally keep going.

Or not. Going back to the 2006 Nall Report, the AOPA ASF found 104 accidents among GA aircraft in 2005 attributable to mechanical malfunction of the engine or prop. Fifteen percent of those were fatal.

Obviously, engines can and do fail. For example, its a good thing cylinders and pistons are designed for easy removal and that complete ignition systems can be changed in about an hour.

But, over the years, and depending on the engine and the parts manufacturer, many components proved failure prone. For example, who can forget the costly Airworthiness Directives (ADs) mandating crankshaft replacements for engines manufactured by both Continental and Lycoming? Those ADs involved defects the average inspection wont find and came into being after more than one failure. Some people are still paying those bills.

What can the average aircraft owner do to prevent these kind of problems from rearing their heads in mid-flight? Short of choosing a good engine shop for their overhauls and insisting on good maintenance, the answer is “very little.” We “average aircraft owners” simply dont have the skills, knowledge or expertise to determine whether some major part on our piston engine is going to fail at an inopportune time. Which is simultaneously silly and tragic, since even a 20-year-old car has something as simple and basic as a “check engine” light alerting us that something under the hood is amiss.

Some new airplanes come with aviations equivalent to the “check engine” light; I had to install an engine analyzer in my older airplane and learn how to use it to obtain similar functionality. But none of these devices can warn us before a cylinder cracks, or a rod snaps and pokes a hole in the crankcase.

For these things, we can only practice our engine-out procedures while managing the risks imposed if such a failure occurs at night over the mountains, or while flying a few miles offshore between Florida and the Carolinas. For some other things, though, there are a few steps we can take to minimize or eliminate engine failures.

One of the easiest ways to prevent engine failures is to ensure theres always enough fuel aboard to get us to another airport. Again referring to the 2006 Nall Report, we find 68 accidents resulted from using up all the fuel aboard the aircraft in 2005; nine of these were fatal.

Fuel starvation-fuel is aboard, but not getting to the engine(s)-caused 35 accidents, 10 of which were fatal, while contaminated fuel brought down another 10 aircraft. Only one fuel-contamination accident was a fatal. But, and as the AOPA ASF notes, “An average of two accidents per week is not a record to be proud of, nor one easily explainable to an insurance company or the FAA.” Its also not easily explainable to family members or business associates, we would add.

The simple fact is were terrible at the easy task of putting fuel in the aircraft and managing it so a) it flows to the engine and, b) we have some remaining when we land. Properly manage our fuel and, right away, weve eliminated more than 15 percent of accidents resulting from mechanical or maintenance failures.

Nothings more frustrating than to firmly grab an engine control, pull on it and have the entire assembly come out of the panel. Dont laugh-its happened. Not only is it dangerous-and potentially embarrassing if youre not alone-but coping with the aftermath can greatly increase cockpit stress for the unprepared pilot. Frankly, if it happened to me, Im not sure which emotion would be most prominent: Fear of dealing with the aftermath or anger at the engineers who designed the cable and the mechanic who last worked on it.

This is just one example how components and accessories mounted to the engine can fail us, even if the powerplants mechanical condition is otherwise tip-top. Additional examples include magnetos, fuel pumps and turbochargers-Im sure you can think of a few more.

Again, though, the pilot and aircraft owner has some control over how and whether these items fail, as well as when. Yes, its far too simple to suggest a “thorough preflight” would discover these problems before they fail. After all, who checks a magnetos timing at preflight? Instead, the way to catch these potential failures is during regular inspections-annuals, progressives or at other intervals-when cowlings are pulled and detailed examinations are possible.

Components like engine controls are simple sheathed cables or linkages with rod ends connecting the knobs and handles in the cockpit with the prop governor, fuel controller/carburetor and throttle body. Fittings at both ends are easily inspected, lubed, repaired or replaced. Adjustments are easy to make, both to ensure the controls security and smooth, accurate movement.

Similarly, most carburetors and magnetos are well-understood 1920s-era farm-tractor technology: Any mechanic worth his A&P ticket can give you an honest assessment of their condition 10 minutes after removing them from the engine.

Getting a handle on how often an engine accessory fails and results in a statistic isnt as clear-cut as with fuel, however. The 2006 Nall Report breaks down the data into two categories of interest: controls/airframe and electrical/ignition. While the former certainly includes the primary flight controls, it can also involve engine/prop controls; from the data, we just cant determine the proportions.

Regardless, in 2005 the data says 8.2 percent of all accidents resulting from maintenance/mechanical failure-19 total-involved the controls/airframe. Of those, 22.7 percent (five accidents) were fatal. The same lack of granularity is present when considering electrical/ignition-based accident causes. Only 3.9 percent of mechanical/maintenance-related accident involves these failures-still too many-totaling nine occurrences. Thankfully, no one died after an electrical/ignition failure in 2005.

Another area of engine operation and maintenance deserving our attention is the oil system. Like ensuring we have fuel, this should be a no-brainer. But apparently, it isnt.

During the preflight inspection, checking oil should be as automatic as buckling a seat belt. Like fuel, we need to ensure we have a sufficient quantity and that the easy stuff-filler caps, dipsticks and access doors, are secured. Verifying the engine oils cleanliness or contamination is almost impossible with a dipstick, however. Thats why we establish regular oil-change intervals and stick with them. A good rule of thumb is to change the engine oil every 25 hours if the engine isnt equipped with a filter; every 50 hours if it is. Of course, the filter gets changed and the old one cut open for inspection at the same time. Right?

Anyone can do this type of preventive maintenance with a little bit of training and planning; FAR 43 allows Private pilots or better to perform oil changes without supervision. In fact, the only real trick is getting the safety-wiring on the new filter correct. Of course, we must replenish the engine with the correct oil and use the correct filter. But thats not so hard.

Some tightly-cowled aircraft require a bit of effort to change the oil; on others, its a snap. Having your A&P install a quick-drain and collecting a few old hoses and buckets makes the task easy. Finally, dont forget to send out a sample of the old oil for analysis. See the sidebar on the opposite page for more.

The 2006 Nall Report states, “Oil system issues resulted in 6.9 percent of mechanical/maintenance accidents, and 9.1 percent of those involving death.” Not bad, but still too many.

To what other items can we pay attention during routine maintenance and preflight inspections? Everything. When was the last time you checked/replaced your air filter? Again a relatively simple item, but blocked airflow to the engine pretty much guarantees a short flight. This is something for which the average aircraft owner needs to consult an A&P, however.

Propellers also need a close look from time to time. Is there any oil streaking on the blades? Chips, cracks, gouges or other damage? Is the spinner secure? If its not a fixed-pitch prop, do the blades move at all if you try to twist them during the preflight? If so, consult a mechanic before flying-they shouldnt.

Exhaust systems and turbochargers are candidates, also. Look for evidence of leaks and cracks, and check their security by firmly pulling/pushing on tailpipes. Ensure oil lines running to the turbo are secure, also, since spraying combustible oil on something this hot pretty much guarantees a bad day.

We cant do much-at least on a regular basis-about internal failures of our engine(s). But “engine failure” is a broad category, encompassing fluids, accessories, controls and-well, anything attached to a powerplant. Keep fuel flowing to it, perform detailed inspections, change the oil and pay close attention to accessories and controls, and its likely you wont become a statistic.