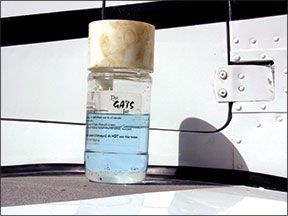 Ensuring adequate flow of clean fuel to your engine(s) would seem to be a pretty basic part of ownership and regular/pre-flight inspections. Yet, according to AOPA Air Safety Institute’s 2011 Nall Report, “Eight accidents were attributed to fuel contamination, six of them by water. Seven of those airplanes were more than 20 years old, and at least three had been tied down outdoors for extended periods during which they were not flown regularly.” Some people apparently didn’t get the memo.

Water in fuel systems is an easy thing to encounter when an airplane is parked outside for extended periods. And one of the reasons is fuel caps with recessed flip-to-unlock handles. Water can collect in the recesses and drain into the tank past poorly maintained O-rings, or it can seep past the outer seals. There are formal tests that can be conducted, on all fuel caps, but the flip style is easy to test for leakage via the handle recess: Remove the cap, lock it and pour some water into the recess. The seals in other fuel caps also need periodic inspection, and also can leak water.

Another place to find water is in the fuel itself, by draining sumps and examining what’s collected. Water in gasoline looks dirty and begs to be completely drained. Water in Jet A looks cloudy. If it begins to clear at the top of a container, that’s water, versus some other contaminant. While you’re draining fuel, check to ensure there’s nothing floating in it, or collected in the sample cup. A couple of non-recurring specks of dirt isn’t anything to worry about, but anything more is grounds for further investigation.

Modern technology has given us efficient ways to detect water in fuel, even if it hasn’t come up with a way to stop it from getting in to begin with. But in the end, the buck stops with the pilot and owner, who should ensure the most basic of fuel system inspections is performed.

Background
On April 1, 2012, at about 1600 Central time, a Beechcraft Model 58 Baron crashed shortly after takeoff from the Woosley Field Airport (96KY) in Calhoun, Ky. Visual conditions prevailed. The airplane sustained substantial damage and the solo private pilot was fatally injured.

The purpose of the flight was to obtain fuel at a nearby airport. A witness observed the accident airplane taxiing to the runway’s approach end and staying longer than normal. The witness heard the engines being run up and saw the airplane being aligned for takeoff. The witness further stated the airplane appeared to get airborne faster than normal.

Later that same day, because the pilot did not return as expected, a search was initiated. The wreckage was located at about 2330.

Investigation
The airplane impacted in a wooded area and came to rest inverted with its empennage elevated. It was approximately 1000 feet and 225 degrees from the runway’s departure end. Its heading was approximately 250 degrees.

All components necessary to sustain flight remained attached or were in the main wreckage. There was no in-flight or post-crash fire noted. Flight-control cable continuity was confirmed for roll, pitch and yaw. All primary and secondary flight control surfaces remained attached at their respective attach points. The landing gear and flaps were extended. The left and right fuel selectors were in the “on” position, and both fuel boost pump switches were in the high position.

Damage to the right engine’s propeller was consistent with engine producing power at impact; the left engine’s propeller showed no such evidence. Both engines were sent to their manufacturer. Despite impact damage, both engines were operated in a test cell. The only discrepancy involved the right engine’s full-throttle rpm was recorded at approximately 2572; the specification is 2700 rpm.

A section of the left wing’s outer fuel cell with attached fuel cap was separated; no fuel was detected in the remaining cells of the wing. Following removal of the fuel sump/strainer bowl, rust-colored water was noted and the interior surface of the strainer bowl was heavy corroded. The strainer filter also was corroded. Disassembly of the fuel strainer drain line revealed it was almost completely blocked internally by rust debris. The fuel selector was in the “on” position and there were no obstructions from the inboard cell to the engine.

Approximately 11 gallons of 100LL fuel were drained from the right wing fuel tank. No fuel was noted at the fuel sump/strainer. Rust-colored water was detected in various fuel system components from both engines. Further, the strainer drain lines and outer tank drains in both engines’ fuel systems were partially blocked by rust-colored debris. Examination revealed evidence of long-term water contamination of both engines’ fuel systems due to leakage past the fuel caps, which are normally replaced on an “on-condition” basis during maintenance. The pilot’s stepson reported his stepfather would park the airplane outside if he intended to fly it soon.

The NTSB also said, “The engine failure likely was due to water contamination in the fuel system, which was not detected by the pilot during the pre-flight inspection.”

When the left fuel cap was replaced in July 2010, an incorrect O-ring was installed. In April 2011, a Canadian crash investigation prompted the manufacturer to revise the type’s maintenance manual to require fuel cap overhaul. Guidance in effect when the accident airplane’s most recent annual inspection excluded the accident airplane (by serial number) from this overhaul.

There’s enough blame here to go around, but it still comes down to the owner/pilot to inspect and maintain the airplane’s fuel system, and prevent water from getting in.