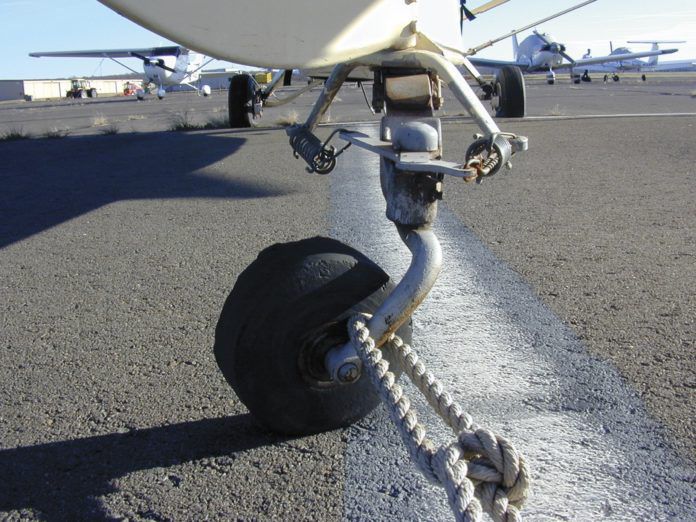 I always enjoy Mike Hart’s articles, and his well-thought-out approach ensures that those two rusty pilots (“A New Homebuilt And Rusty Pilots” June 2019) have received some excellent preparation as they return to flying. Mike’s explanation on the ground loop needs some clarification, though.

The weight of the engine is only significant in that it is part of the center of gravity of the aircraft, which naturally lies aft of the main gear in a taildragger. Therein lies the problem, especially while landing. That center of gravity, without interference, will travel in a straight line when in motion, according to Newton’s First law, which is often called inertia. It is imperative that we keep the airplane (longitudinal axis) tracking and aligned with that same straight line.

Primarily, the tires tend to take the airplane in the direction the nose is pointed, so failure to keep alignment causes the airplane to begin veering off that line introducing a side load force and the center of gravity (where the momentum lies) “pushes” ahead to take the lead, resulting in a ground loop. Runway friction is a consideration, so landing on a dry, hard surfaces requires the most skill.

Great article (“Child Is My Copilot” June 2019) about flying with young children! I wish it had been written 25 years ago when my two boys were little. The oldest’s first flight was at 18 days old, and the youngest one at four days old!

When I was an anesthesiology resident in Winston-Salem, I rented a 1965 Mooney M20E from one of my professors, Dr. Loren Bauman, who was a pediatric anesthesiologist and a very experienced pilot. When my oldest son was born in 1988, Loren advised that if I flew with him, keeping my rate-of-climb, and especially my rate-of-descent, no more than 500 fpm would allow his ears to clear more easily. I used this rule-of-thumb over the many flights we flew over the years, and never had a problem.

Thanks for the kind words. Managing rates of climb and descent in consideration of tender ears is one topic that didn’t get great detail in that article. The 500-fpm suggestion is a good one, and one we’ve employed. We also strategically fed the infants by bottle when climbing and descending, to help equalize their ears. For older children, swallowing and chewing gum can help.

I am a long-time subscriber and look forward every month to receiving my copy of Aviation Safety. Each issue is loaded with information that I can apply immediately to my own flying.

I would like to point out an error in your article “Flying Your Propeller” in the June issue. In discussing feathering and reversing props it said, “Reversing is…pivoting the blades in the hub past their feather position…” In fact, propellers are reversed by continuing the rotation of the blades in their hub past the flat pitch position. It is done this way for a number of reasons, not the least of which is to avoid loading down a running engine with a propeller in feather.

All in all, though, a great article. Keep up the good work!

ADS-B provides wonderful information, most notably weather updates and traffic advisories. The delay of anywhere from 10 to 20-plus minutes in radar images has been well covered, but to this point I (and likely many other pilots) have assumed traffic reported by ADS-B to be accurate.

Unfortunately, every device—new or old—has failure modes and can provide inaccurate information. This point was brought home to me a few days ago when, flying south of Albany N.Y., I noted an airplane flying northwest at slow speed and very low altitude. Indeed, I was at about 2200 feet msl, while the target was nominally reported as 2600 feet below me, and actually shown as more than 500 feet below sea level.

Needless to say, I set off in search of the elusive sub-sea level “Yellow Submarine” and successfully sighted him. Appropriately, it was a high-wing taildragger painted Cub Yellow. In the past, I felt quite secure if an ADS-B target’s track passed directly over or under me with more than 1000 feet of altitude difference; henceforth, I intend to alter my track so any target is offset both horizontally as well as vertically.

Have other Aviation Safety readers or contributors experienced similar issues with altitude reporting? Is there any data about ADS-B altitude accuracy?

We haven’t noticed targets behaving as you describe—which could be attributed to faulty Mode C data aboard the taildragger—but we have seen other ADS-B In traffic (TIS-B) shenanigans. These have included targets suddenly accelerating far faster than possible, probably due to some kind of lag in the data. We’ve also seen targets materialize from somewhere behind us at our altitude, and then try to merge with us before disappearing. It’s happened twice that we recall and both occasions were…disconcerting. We categorize that behavior as some kind of own-ship ghost.We’d certainly be interested in hearing from other readers about their experience with unusual TIS-B behavior. Some video would be helpful, too. That said, we need to insert an obligatory disclaimer: ADS-B In’s TIS-B traffic is an advisory service only and is not a substitute for required traffic systems, or for looking out the window.

Out Of Gliding Distance

Mike Berry’s article, “Out Of Gliding Distance,” July 2019, fails to mention the option of not going over significant water in the first place. Had the pilot of the Bonanza flown east across Michigan’s upper peninsula then south over the lower peninsula instead of flying a straight line over Lake Michigan, it would have extended the flight by about 47 nm. At 163 knots, it would have added only 18 minutes to the proposed trip and this tragedy never would have occurred.

I’ve had this discussion several times with my instructor over the last 25 years and these are his comments: “Never fly over water in a single-engine airplane unless you can glide to land. The bottom of Lake Michigan is littered with single-engine planes that failed to make it across.”

When I mentioned an inflatable life raft, he had more comments: “How are you going to get your passengers, yourself, and the raft out while the plane is upside down and sinking, cold water is rushing in, you have a broken arm, and you are not a trained Navy Seal?” As if that wasn’t enough to convince me not to fly over water, he then asked, “How many minutes is your life worth?”

Like the pilot mentioned in your article, I also live in Michigan and it’s very tempting to fly over the lake to avoid Chicago’s airspace when I visit my daughter and her family near PWK. It takes only 13 minutes longer to fly around the southern shore of the lake.

An engine-out over a Great Lake is a statistical occurrence, meaning it will happen again and again if pilots continue to take the same risk.