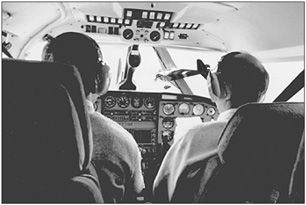 I was instructing in a Beech Baron. The days flight was nearly complete, and we were finishing up with a few VFR circuits to practice landing in various configurations, using Runway 31 at the Hutchinson (Kan.) Municipal Airport (HUT), a towered facility. Turning crosswind, I heard a Cessna Citation, also on a training flight, check in with the tower a mile outside the final approach fix for the VOR Runway 4 procedure, requesting a low approach. Very familiar with the airport and its aproaches, I knew the Cessna jet would quickly descend from 3000 feet to 2040 feet MSL a few miles out, flying southwest to northeast across the airport. As the field elevation at HUT is 1542 feet, our downwind would be flown at about 2500 feet, providing 500 feet of separation as we overflew the jet on our downwind. Sure enough, as we turned downwind at pattern altitude, the tower called the traffic and told us it would underfly us at midfield. I saw the Cessnas landing lights, already below us.

But the Citation didnt behave as I and the tower controller expected. Its crew made the common nonprecision approach error of descending to MDA and immediately pulling up in the missed approach. My student was concentrating on the runway and I was concentrating on the student, but out of the corner of my eye I saw the white, straight-winged jet getting bigger, its bright landing light shining right at us. When the Citation, growing rapidly, disappeared behind the right engine nacelle, I took the controls from my student and aggressively pulled aft and right, climbing and dropping the right wing to regain contact. The Citation missed us and went on its way; I lost this game of aeronautical chicken but if I had not acted, we would have collided almost directly above the control tower.

Big-Sky Theory?
The time-honored concept of seeing and avoiding traffic that poses a potential collision threat is an underpinning of the air transportation system that preserves our freedom to fly. Replacing see and avoid with any other form of aircraft separation would severely limit the utility of airplanes, and would impose a level of regimentation most pilots would find oppressive. Yet, see and avoid has its own limitations. Its easy to get complacent, thinking that the big sky theory of collision avoidance-the idea that even crowded airspace is so vast that the chance of a collision is remote-will keep us from running into each other. The reality is, though, that any time youre in anything other than solid IMC in controlled airspace, you alone are ultimately responsible to see and avoid other traffic.

And my episode at HUT should underscore that Class D airspace, where aircraft are only guaranteed separation on the runway, is by no means immune to the risk of mid-airs. In fact, the NTSB reports that a quarter of all midair collisions happen in or near the pattern of an airport with an operating control tower. Similar statistics were reported by the Australian Transport Safety Bureau (ATSB) in its study of mid-air collisions stretching from 1961 to 2003. The sidebar on page 22 shows where in the traffic pattern the ATSB determined mid-airs most often occur.

Trips And Traps
Despite the prevalence of ATC radar and panel-mounted or portable traffic avoidance devices, the principal tool pilots use to keep from banging into each other is still the Mark I, Mod. I eyeball. However, just like ATC radar, the FAAs Mode S transponder-based Traffic Information Service (TIS), TCAS and other airborne collision avoidance systems (more, below), the eyeball has a host of limitations.

As the sidebar details, the eyes physical structure and limitations can work against pilots who remain focused on one area of the sky while trying to spot traffic. The reason is that the eyes best performance occurs within a very narrow field of view called the foveal field. Between this field and your peripheral vision, its extremely hard for the eye to pick out and send to the brain messages about fixed objects, the kind on a collision path with your airplane.

Moving objects, on the other hand-those which will miss you, though perhaps passing too close for comfort-are more easily recognized. One solution is to keep moving your eyes around the sky, refusing to focus on any one area for very long. This method works well in both the en route and terminal environments. Another tool in your bag of tricks is to understand where the likelihood of a collision is greatest. While approaching or flying in these areas-airport traffic patterns, ground-based navaids, frequent practice areas and popular terrain features-the chance of a collision is at its greatest. Meanwhile, some other operational areas deserve your attention.

Practice Approaches
For example, instrument approaches dont conform with visual traffic patterns, and very often result in a straight or very nearly straight-in approach. Communication and vigilance are keys to safely practicing approaches at non-towered airports. Radio calls of HARVS inbound, final approach fix inbound or the like simply dont cut it for traffic avoidance-VFR pilots or pilots not familiar with the local area have no idea where to look for you. Instead, state your position in visual terms, for example: Comanche is four miles north, heading straight in for Runway 17.Now everybody listening knows where to look, and what you plan to do. Use the same terminology while making an actual approach when marginal conditions or VMC prevail beneath the clouds because VFR traffic may well be flying there.Try to come up on the CTAF as early as possible when making an IFR arrival.

More importantly, though, you need to look for other airplanes during your practice or actual approach. Be ready to break it off, hold circling minimums and circle behind visual traffic, or in a worst-case scenario fly the missed approach procedure back into IMC if traffic conflicts present themselves at the end of your approach.

Non-Towered Airports
A common factor in almost all nontowered-airport mid-airs is pilots using inappropriate traffic pattern entries and failing to use or properly monitor advisory frequencies. Most mid-airs occur in very good, day VFR conditions, with bright sunlight being the only commonly cited weather-related factor.

As these pages have detailed many times, the Aeronautical Information Manual provides precise guidance on methods of entering and exiting non-towered airport traffic patterns. Like the Citation jet in my near-collision at HUT, airplanes around non-towered airports are best seen when they are where other pilots expect to see them. Use standard traffic pattern entries and departure paths, especially avoiding the straight-in approach.

Nonetheless, theres always the nonconformist idiot who flies a left-land pattern when right turns are appropriate, or makes the hazardous straight-in.I look and voice aloud with my students (and to myself, when flying left seat), the runway is clear, final is clear, base and backward base (the wrong-side pattern) are clear before taking the runway for departure, and base is clear, final is clear, backward base is clear before making the turn from base to final. Its natural to fixate on the runway close in on the traffic pattern, but its critical to watch the sky, not the ground.

En Route Collisions
En route mid-airs are not nearly as common as those near airports. Only about one-quarter of all reported mid-airs happen in the en-route phase. Even here collisions tend to occur at shallow convergence angles with one airplane gradually overtaking another. About half of those involve deliberately close flying-formation work, or attempted close inspection of one airplane from another trying to verify landing gear position or other abnormality.

All ATC traffic advisories (even under IFR) are given on a time-available basis only. A pilot flying in VMC is expected to see and avoid other airplanes without ATC assistance. Even under radar advisories, an instrument clearance or in Class D airspace, the expectation is that pilots will see and avoid other airplanes. Remember: at a towered airport with Class D airspace, ATC only guarantees separation while on the runway. Controllers will try to properly sequence traffic to ensure efficient runway use, but airborne separation is not part of the plan.

Planning a formation? Thoroughly brief the mission and do not deviate from the plan, and stay wide-remember, you dont have the option of punching out if inattention or a bump of turbulence puts you into contact with your wingman.

Technology
Without going into the specifics of any particular product, traffic-avoidance devices come in three basic flavors-those that actively query nearby transponders as with TCAS, those that use Mode S transponders to uplink ATC radar data (the FAAs Traffic Information Service, TIS) and passive listening devices like those marketed by Monroy and SureCheck.

Passive detectors listen for other airplanes transponders. Most have ranges of from one to about six miles. As good as they are to alert you to other traffic, passive detectors have limitations related to antenna position (the intruding airplanes fuselage can block the transponder signal) and they only detect aircraft with operating transponders.

The TIS system depends on airplanes with working transponders and altitude information is only available with operating Mode C. Also, you must have a Mode S transponder and a display to receive it; for now, TIS is only installed on approach control radar systems. TCAS is usually reserved for turbine-powered aircraft where its proportional expense isnt as great.

See And Avoid?
Even with on-board traffic detectors, were still dependent on see and avoid. The NTSB says about 88% of pilots involved in mid-airs do not see the other airplane in time to avoid a collision. Mid-air collisions are fairly rare but almost always deadly. See and avoid isnt perfect, but once we understand its limitations, we can make it work.