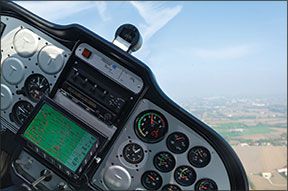 Each year, some number of pilots come to grief because they can’t handle the demands of instrument flight beyond straight-and-level. The AOPA Air Safety Institute’s 2011 Joseph T. Nall Report, which took a close look at general aviation accidents in 2009, found 22 accidents that year in which a non-commercial fixed-wing aircraft was involved in a weather-related accident with an instrument-rated pilot aboard. Of them, 16 involved fatalities. We can do better.

Ensuring we’re proficient in the airplane is one thing most of should be able to demonstrate on demand. But proficiency in the airplane while maneuvering solely by reference to instruments is something else that, perhaps, we’re not so good at. The reasons are both numerous and irrelevant: There’s no good reason an instrument-rated and -current pilot should be involved in such accidents unless he or she needs some additional work. With that in mind, let’s look at a simulator-based program designed to get and keep us proficient.

Uncovering The Problem
The recent FAA change in airline pilot regulations—which require first officers to have at least 1500 hours total time and an airline transport pilot certificate—indirectly points out some deficiencies with many experienced pilots of personal and business airplanes. Airline new-hire indoctrination training (“indoc”) has consistently found many candidates for the right front seat have significant shortcomings in basic instrument and aircraft handling skills.

What the regional airline training departments told me in 2002 while I was a consultant creating the private/instrument/commercial pilot training syllabus for a major ab initio “12 months from student to regional jet” start-up appears to remain true even today, perhaps even especially among pilots who might be expected to perform better, because they have at least the requisite 1500 hours logged before beginning the training in order to qualify for the ATP checkride. If our experienced, ATP test-ready pilots have the same instrument and basic aircraft handling deficiencies the airlines found among 250-500 hour pilots a decade ago, it suggests that these same challenges may persist in pilots of all experience levels.

Although this basic problem has been known for years, it recently hit home for me in a roundabout way. A pilot I know has long wished to become an airline pilot. When the 1500-hour rule went into effect earlier this year, his résumé apparently drifted toward the top of the stack on a recruiter’s desk because, he told me, he had 1520 hours logged at the time he was interviewed for a major regional jet carrier first officer (FO) position. In his late 40s and a past owner of a high-performance aircraft he used in his business, the career-changing pilot passed the airline interview and entered that carrier’s indoctrination program. Indoc consists of several days of classroom instruction on airplane systems, regulations and airline policies and procedures. After passing the written and oral tests, the FO candidate progresses to cockpit procedures trainers (mockups with limited functionality, primarily to teach cockpit layout, checklists and flow techniques in a crewed environment) and eventually full-motion flight simulators. The pilot blogged about his experience, so I was able to stay abreast of his progress and—satisfying my own personal and professional curiosity—the syllabus itself.

When the pilot progressed to the simulator phase, he had difficulty with some of the basic maneuvers. He wrote me a personal note saying he was having trouble maintaining airspeed in steep turns, and he was consistently gaining too much altitude in recovery from stalls—the airline’s standards require recovery no more than 200 feet above the original altitude at the original airspeed. We might debate the wisdom of that standard (I think the object of a stall recovery should be to transition to a climb attitude and speed, which normally would be the objective in an inadvertent-stall scenario). But it’s the airline’s training objective and would demonstrate good command of a high-performance regional jet, so there may be a larger training issue involved.

The pilot jump-seated home (how cool is that, at least until the novelty wears off?) during a scheduled break in the training. While there he asked me if I could suggest anything to help him prepare for his next simulator session during the several days before he reported back to “the schoolhouse.”

IFR Precision
I Googled up a few providers of GA aviation training device (ATD)-based training in his area (several hundred miles from my home). Although what I suggested to the pilot can be done in an airplane—which is very important for us Part 91 types without ready access to a simulator—I felt in this particular case preserving the simulator environment and “feel” would be beneficial to the pilot in achieving his goals.

There has been a rapid expansion in availability of general aviation simulation resulting from availability of very fast computer processors, terabyte-level storage capacity and available digitization of pretty much anything visible from space. In the right instructor’s hands, this tremendous capability translates into a valuable training experience for pilots, regardless of total time.

I proposed a three-lesson basic instrument skills refresher, details of which are described in the sidebar on page 13. After designing this instrument training refresher syllabus to the airline candidate pilot’s specific needs, it occurred to me this would be a superb instrument review for any pilot. It solidly connects basic attitude flying skills to real-world instrument flight in ways that are often glossed over during initial instrument training, and are almost never practiced with this intensity after a pilot earns an instrument rating. Throw in some unusual attitudes, partial-panel work and a circling approach to a landing, and this satisfies the requirements of an instrument proficiency check (IPC). I think I’m going to do this with my CFII for my next recurrent training.

Patterns A and B
Instrument flight patterns A and B, depicted in the sidebar on page 13, are standard IFR training maneuvers. They were developed toward the end of World War II when operational losses due to pilot inexperience in instrument conditions were meeting or exceeding combat losses, and the U.S. government saw the need to substantially increase the time spent on maneuvering by reference to instruments into the basic and advanced pilot training syllabi.

Look at each pattern and you’ll see that, in addition to serving as an exercise to fine-tune aircraft control in IMC, they artfully duplicate the various maneuvers necessary to fly an instrument approach: procedure turns, instrument let-downs, missed approaches and holds. Fly the patterns well and it’s easy to overlay the navigational tasks onto the patterns to fly charted approach procedures.

For example, the first portion of Pattern A traces the maneuvers of a traditional procedure turn. When was the last time you had to fly a full-procedure, “own-nav” approach? It may have been yesterday in some parts of the country, or it may have been years ago, but if the radar goes out you may be assigned a full-procedure approach on the flight you’re taking this afternoon no matter where you are. It’s a skill rarely used outside of training but one we must remain ready to fly at any time.

The second major portion of Pattern A, at the bottom of the diagram, duplicates a teardrop holding pattern entry—also useful as a procedure-turn technique. From there, the pattern duplicates a holding pattern. The exercise throws in timing and airspeed changes to duplicate some of the maneuvers you’d make in these instrument maneuvers as a means of fine-tuning your instrument skills.

For example, the angle of bank (in degrees) is approximately 15 percent of the true airspeed (in knots). The bank angle required to fly a standard-rate turn, then, varies with the airplane’s speed. A standard rate turn at a 100-knot approach speed requires a roughly 15-degree bank. A standard rate turn in that same airplane at a cruise speed of 140 knots requires roughly a 21-degree bank angle.

Meanwhile, Pattern B is a variation on this theme—another series of timed heading and airspeed changes—but with a vertical component. After beginning similarly to Pattern A, the second half of the Pattern B maneuver simulates descending along the final approach course, followed by a go-around or missed approach procedure.

In addition to airspeed changes, Pattern B includes performing checklists and changing airplane configuration (flap setting) at preprogrammed parts of the procedure. In a retractable-gear airplane, I’d add extending the gear at the beginning of the final 500-fpm point, simulating the final approach fix inbound, and then retracting it as part of the missed-approach procedure.

Practice Patterns A and B enough to make the techniques instinctive, and fly them frequently enough to retain that instinctive response, and you’ll fly far more precise (and therefore safer) instrument approaches.

Training Technology
If you want to do this in a sim, remember there are several levels of pilot training simulation devices:
• Cockpit Procedures Trainer (CPT): A cockpit mockup with limited functionality, used to create basic familiarity with the cockpit layout and the use of checklists and procedures.
• Aviation Training Device (ATD): A more sophisticated simulation, with functional aircraft controls and, in most cases, a simulated visual display out the forward windows. An ATD is far less expensive to operate than a full simulator, so they are used frequently in general aviation and to depict aircraft for which no true simulator is available, and as a lead-in to the true simulator. The ATD serves as a lower-cost way to provide some training and preserving the full simulator schedule for other work.
• Flight Simulator: A true (or “full”) simulator includes a motion base and other features, mainly software, to create a very realistic flight experience for the student. There are several levels of FAA simulator approval, with the highest approval types affecting simulators so realistic they may be used to obtain a type rating before ever flying an actual aircraft of the type.

Stick and Gauges
When we do train, we tend to spend our time in practicing to navigate the airplane in situations associated with instrument procedures. History (and the airline indoc experience) demonstrates we should spend at least as much time honing our skills to aviate.

Certainly it’s something we should communicate more: To increase the safety of instrument flight, practice-flying basic stick-and-rudder exercises in a simulator or in an aircraft under the hood will make you a far better pilot on the gauges.