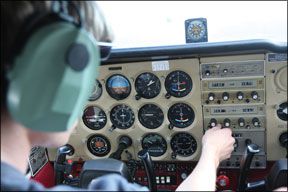 There was a time not so long ago that a single pilot flying hard IFR was considered an accident waiting to happen. There was simply too much going on, conventional wisdom held, for one pilot to handle all alone. Instrument pilots contemplating a flight in actual weather actively sought out others-perhaps an instructor-who could help with the cockpit chores and make sure the dirty side stayed down.

Except for the freshest instrument pilots, thats all changed. And good riddance. Ive long been convinced the second most dangerous thing in aviation is two pilots trying to fly the same airplane at the same time (the first is a private pilot with a #2 Phillips screwdriver, but thats a different article). But the idea of single-pilot IFR, or SPIFR, being something to avoid seems to have hung on in some quarters. Sure; theres a time and a place to take along some backup, depending on how comfortable a pilot is with the weather, the airplane and the airspace. But Id argue against making the flight in the first place if the only way youd consider it is with another pilot.

Be that as it may, advances in automating the cockpit have paved the way for much more SPIFR than only a decade ago. Thats a good thing, in my opinion, but also means our lone pilot needs to prepare for the flight a bit more than might otherwise be the case.

While some jobs arent complete until the paperwork is done, the lone IFR pilot needs to have his completed before starting the engine. Of course, this means filing an IFR flightplan, but it also means getting a close, healthy look at the weather, having a firm grasp of what Plans B and C are, and thoroughly understanding the airspace the planned flight will traverse. Even though other portions of an IFR flight can force a high workload, theres nothing like a busy terminal area at rush hour to separate the pros from the wannabes.

At a minimum, youll want all your charting information handy, including en route and airport directories, and up-to-date avionics databases. Rather than in the flight bag you stashed in the wing locker (or worse, in the car trunk in the hangar), they need to be right up front with you. Perhaps most important, however, is youll want some way to mount the appropriate approach plate so you wont have to hold it. Whether its a kneeboard, a yoke-mounted binder clip or some other method, you dont want to go fumbling around in the clag on an approach while juggling charts and trying to hit your stepdown altitudes.

One of the busiest approaches I ever shot was at an out-of-the-way oceanside airport after the marine layer had rolled in. The airport was above minimums, but I was unfamiliar with its localizer back course approach and the general area. Too, I had a 40-knot tailwind down final, would be circling to land, it was night and my panel lighting had died earlier in the flight. I was holding a small flashlight in my mouth to read the plate along with a larger one between my legs to illuminate the panel, all the while letting George do the flying, but he still needed to be told when to descend and how far. Fun times.

Back then, I was using bound NOS/NACO charts, and its always a challenge to place them in the cockpit where the pages wont flutter, I can see all the information and the mounting scheme isnt in the way. Nowadays, I use a tablet PC as an electronic flight bag, but that solution eliminates only the page fluttering (as well as the possibility of not having the right approach).

Of course, single-pilot doesnt mean solo. Especially since their life depends on it, most passengers are only too happy to rummage through the back seats detritus in search of the most current plates you have, or to hold them in a conspicuous place for you. But you cant count on their help.

Youll also want to know where youre going-to which FBO or other facility on the airport-once you get there. Nothing screams “unprepared” more than not having an answer when ground control asks where you want to taxi after clearing the runway. Thats the kind of knowledge that comes from knowing the paperwork.

The airplane should be equipped like any other IFR flight. All the panel-mounted stuff is working, of course, and you know what approaches at the destination are enabled by your avionics. There are three items you want within easy reach, though.

First is something to write with. It can be a dull pencil and an old sectional, but you need to write down stuff, like clearance changes and frequencies. Dont trust yourself to remember everything and, even if you have passengers, no one else knows whats going on, so the whole thing depends on you.

Second is your handheld backups. If youve got a handheld comm and a portable GPS stashed somewhere in the luggage compartment, drag them out while preflighting and put them up front where you can reach them. Same for oxygen equipment. (Which reminds me of the O2 bottle I stashed in the back for one flight, only to receive a clearance to 13,000 feet. More fun times.)

Third is something with which to cover failed instruments. Again, the idea is theres really no one else to help you rummage around the airplane finding stuff. If a gyro or the vacuum system fails, youll need to cover affected instruments to prevent the distraction. Post-It notes, the old-style soap holders with suction cups or a purpose made failed instrument cover available from places like Sportys or your local FBO will suffice. It doesnt really matter what you use, as long as something is available when the panel soils the bed.

Of course, pilots can overdo the gear and equipment thing so badly it takes two trips from the car just to load the cockpit. How many flashlights do you need? Is that stack of full-coverage low altitude charts really going to be necessary for this 200-nm hop in your Skyhawk? Use some common sense.

Once you figure out everything youll need, it still has to be stowed somewhere. As we mentioned, stuffing it all in the baggage compartment defeats the purpose. Instead, youll need it all accessible in flight, without leaving your seat. Charts and small items like a pencil can go into the map pockets-after all, thats what theyre for. But what about the handhelds, the approach plate books, flashlights and other gear? Ideally, its all in one place: a flight bag on the floor in front of you.

Flight bags can be as fancy or as simple as your needs and budget allow. You can use a tired old backpack left over from your school days, or something supposedly designed for the purpose and worth an hours dual. It doesnt matter. What does matter is all this stuff is in one place and easily accessed from the left seat. Especially if youre a renter, youll want to keep it all in one easily carried bag (and police the cabin for items you may have removed at the end of the flight).

Nothing makes me want to eject a passenger at altitude more than someone who wont stop talking. On several flights, Ive used my audio panels “isolate” feature to eliminate me from the intercom, allowing nothing but ATCs pure, sweet tones to filter through my headset. On some flights where Ive spent a lot of time talking and not as much flying, Ive forgotten basic stuff-like switching tanks or listening to the ATIS. Not good.

Especially when theres no one else around to catch what you missed, youve got to listen. These pages have on more than one occasion urged pilots who have trouble with ATC to listen more and talk less. Face facts: Communication is a two-way process. While you may think youre fully engaged in the flights progress, unless you are listening to ATC give out vectors and handoffs, give deviations around weather and talk about the delays and holds theyre giving away, youre not participating as fully as you should.

The solo pilot has little to keep him occupied on most flights except maybe for some in-flight audio. The single pilot with a load of passengers may have more than he or she can handle. Listen up.

Your pre-flight planning highlighted what weather there is along your route and suggested ways to deal with it. But weather is dynamic: It moves, changes in intensity, grows and shrinks all the time. Unless youre closely monitoring the weather ahead of you, there could be a nasty surprise.

The best tool Ive found for staying abreast of meteorological changes while en route is an XM WX or other airborne weather receiver. Whether built into your glass panel, a Garmin or other handheld GPS, or configured as part of another portable device, the combination of Nexrad weather radar and Metars is a huge advance in staying abreast of en route weather. This is especially true given the Flight Service Station systems reduction in facilities, manpower and quality.

Even if you dont have in-cockpit weather, listening to ATC will help you figure out where the bad stuff is, if not get through it. Same for the various recorded weather broadcasts and center weather advisories available by listening to nearby VOR stations. Regardless of where you get your in-flight weather, use it to make intelligent decisions on questions like diverting.

The final item on our list has nothing to do with “stuff” you bring along or whether you use it. Instead, it has everything to do with how well you were trained for IFR and how proficient you are. You can have the most well-equipped panel available, but if you dont know how to use the magic, its just so many flashing lights.

Getting comfortable with flying SPIFR is pretty much synonymous with being proficient. Its hard to describe, but youll know it when you see it. If you know youre not there yet, get some more dual. Better yet, get another, more-experienced pilot to tag along on a few flights. Dont ask him or her to help, but to critique your procedures once youre both back on the ground.

Single-pilot IFR isnt rocket science, but it does require a bit more planning than if two well-trained pilot are available. Hopefully, your double-I worked toward prepping you for SPIFR from hour one. Regardless, plan your flight and fly your plan. Sweat a few of the little things a bit more than usual and youll do just fine.