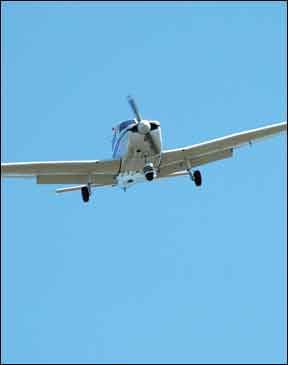 When was the last time you flew a slip? Are slips a necessary maneuver belonging in every pilot’s skill set? Or are they an aerial anachronism, a holdover from earlier flying days, with little application to the modern world? Slips originated in aviation’s early days, when most, if not all, airplanes lacked wing flaps. They were and are used to increase the angle of descent on approach, and to get the airplane’s nose out of the way of the pilot (who often sat well aft) to better see the runway ahead when landing. Given the genesis of the art of slipping, should we still be expected to master it?

I have my own ideas, of course. But I thought readers might be interested in a little wider body of opinion. That’s why I polled 100 experienced and safety-conscious pilots, asking five questions about how they use slips and whether slips should continue to be taught.

What’s a Slip?
I’ve found it’s always a good idea to define exactly what we’re talking about before launching into a debate, so before we go to the polls, let’s first review a couple of terms. To begin, a “slip” is a maneuver in which the airplane’s wings are banked to an angle greater than needed for the current rate of turn. Insufficient or even opposite rudder is applied to stop or minimize the turn; the airplane presents itself “sideways” to the relative wind, and the side of the fuselage creates significantly greater drag than when the airplane is in coordinated flight. Extra drag means a reduced rate of climb (if climbing), reduced cruise speed (in level flight) or a greater rate of descent (when descending, the most common use of a slip).

At least for the novice or out-of-practice pilot, a slip is usually the unintended result of inattention to rudder inputs or downright sloppy pilot technique. Once a pilot is experienced and current enough that rudder coordination comes almost automatically, the pilot may choose to slip the airplane, however, usually to steepen the descent angle.

The FAA’s Airplane Flying Handbook and practical test standards use the term “intentional slip” to describe this technique. There are two types of slips (from here on we’ll assume slips described in this article are “intentional”):

A side slip is entered by lowering a wing and applying just enough opposite rudder to prevent a turn. The airplane remains longitudinally aligned with the original direction of flight, but the airplane’s ground track (in zero wind) is at an angle toward the lowered wing. The steeper the bank, the greater the angle between the airplane’s longitudinal axis and the path it tracks through the air. A side slip permits a rapid rate of descent without an increase in airspeed, but it’s not a good way to keep the airplane aligned with objects on the ground—such as a runway.

Meanwhile, a forward slip is created by lowering a wing and adding enough opposite rudder to keep the airplane traveling along its original ground track. A forward slip, therefore, achieves the goal of rapid and steep descent, while permitting the pilot to remain lined up with a runway or landing zone. Consequently, most intentional slips will be forward slips.

There is a practical limit to the steepness of a slip, and it depends on rudder authority. If you displace the rudder to its stops and then bank any further, your forward slip will devolve into a side slip—still a dramatic rate of descent, but not one you can use to make a steep approach over obstacles or to remain aligned with the runway during a strong crosswind. As you’re slipping, then, remain conscious of when you are at or near maximum rudder travel.

Survey Says…
Okay, that’s what slips are, what they do to airplane performance and how the pilot enters and maintains one. That brings us back to our original question: Do we need to know how to slip?

Results from the poll’s first two questions are summarized in the sidebar on page 18. Those results indicate the poll’s respondents generally find slips are beneficial, both as a way to help a student master the aircraft and to add another skill to a pilot’s set. The poll’s other questions asked three “fill-in-the-blank” questions. Following are those three questions (bold) and a cross-section of responses (italics).

What do you feel is the greatest benefit of flying in a slip?

To utilize part of the full envelope of the aircraft’s performance. I think it is important to understand how an aircraft will feel and react throughout the entire performance envelope, and unfortunately, many pilots never get a chance to experience that. Not that one would ever fly regularly outside of the normal operating characteristics of their aircraft; however, it is beneficial to know what is available to a pilot should he need something from his aircraft in an emergency or abnormal situation.

Coming over the trees and bleeding off altitude.

The greatest benefit is another tool in one’s repertoire to manage energy and control drift during landing.

Intentional quick altitude loss in emergency situations to “make it” in a field or otherwise acceptable landing location.

Eye-hand coordination and determining aircraft track over the ground.

Establishing the deep understanding that the controls can, and often should, be crossed.

Slips are yet another tool available to help the pilot in normal and emergency operations to place the aircraft on a desired spot.

What are the disadvantages of flying a slip?

I think many pilots are challenged by them and do not perform them well. When not well trained, I think slips add confusion to critical situations: approach for landing with a crosswind, when too high for landing or overshooting an emergency landing field. In some aircraft, possible interruption of power can occur due to unporting of the fuel intake ports and in others control problems could occur when slipping with full flaps.

The biggest problem I see occurs during landing. For a pilot who uses a slip the entire way down final to landing, he is wasting his efforts. This is because the wind that the aircraft is experiencing at altitude (and the entire way down the final) is not going to be the same wind manipulating the aircraft in the landing flare, where proper slip technique is critical for a proper crosswind landing. I do think it is important to teach proper slip technique, and I do have new students fly a slip throughout the final approach to demonstrate not only how to perform a slip, but to also emphasize that a slip is a “fluid” maneuver and not a “one-size-fits-all” technique. As winds change, subtle or larger changes to the slip may be needed, and prompt and smooth inputs are needed. Flying the slip down final demonstrates this for a new pilot.

Using a slip with full flaps can cause a temporary loss of control [in some airplane types, such as early Cessna 172s with 40-degree flaps] and is prohibited in some aircraft.

In some cases, airspeed can become erroneous due to the effect on static pressure. Also, if airspeed alone is flown and the airplane is inadvertently stalled, spins are likely. If close to the ground, recovery is nearly impossible.

Slips are uncomfortable for passengers. With passengers aboard, I only slip for crosswind landings.

If needed as [an] altitude-loss tool in landing as a normal practice, [the pilot] may not be planning pattern and power use appropriately.

Not comfortable for passengers, may be slightly turbulent due to airflow disruption on horizontal stabilizer. Airspeed may not be accurate.

Unsettling to passengers; concern about controllability if an extreme slip.

Increased risk of a cross-controlled stall. Also, in high-wing models, view of the runway may be obscured during a forward slip to a landing.

Unporting a fuel tank. Can be avoided by slipping away from the tank in use.

It is less efficient for the airframe, but only a pilot not educated in them would use a slip without realizing it. Need to know any adverse conditions in particular airframes (unporting fuel, buffeting and/or blanking tail surfaces, etc.)

Inaccurate airspeed indications, cross-controlled aircraft can be stalled and spun if perrformed incorrectly.

Are there any limitations or concerns about flying slips in multiengine airplanes?

Unless otherwise prohibited by the Aircraft Flight Manual, a slip can be successfully used in a multiengine aircraft. The biggest concern or limitation comes from aircraft design rather than powerplant.

Slips should be avoided except in a strong crosswind.

I have no limitations on slips in general aviation multiengine airplanes and even show students the use of differential power to maintain the slip (vs. using rudder alone). In highly swept-wing jets or airplanes with geometry problems, slips can lead to wingtip-ground collisions and, therefore, slips should be avoided in these airplanes. The AFM should speak to this. If not, it is often covered in training.

We used slips for crosswind landings in the 707 and 747 airplanes. They fly just like any of the light airplanes using slips.

Offhand, it doesn’t seem too worrisome if both engines are producing normal power, but I can imagine some controllability problems might arise while attempting slips in single-engine operations.

Unporting of fuel tank, harder to avoid with a twin.

Putting it All Together
Slips. Do we need ’em? Definitely in no-flap airplanes. In flap-equipped designs, slips still have a place as a tool to maintain runway alignment in strong crosswinds, and as an emergency procedure. More importantly, slips are a good maneuver to use in learning the full operating envelope of your airplane, in case you’re ever in an extraordinary situation where you need an option for losing altitude rapidly without increasing your airspeed. If you’ve not practiced slips recently, ask for a little slip training in your next recurrent training or flight review.