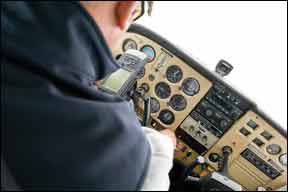 The little voice inside the pilot’s head nagged on and on: “Headwinds higher than forecast…groundspeed lower than planned…maybe you should recalculate your fuel?” The simple fact is pilots too often fail to act on their internal voices until it’s too late. Accident reports, NASA ASRS submissions and down-and-dirty, true-flight confessions in hangar flying debriefs tell the sad tale.

According to NTSB data and analysis by the AOPA Air Safety Institute and the Flight Safety Foundation, improper decision-making—judgment failings, many of them—underpin the majority of the 75 percent of accidents attributed to “pilot error.” It’s not smart to ignore that little voice questioning why you’re ignoring your own best instincts. There are many scenarios where that little voice can start yammering in your ear, perhaps most especially whether there is sufficient fuel aboard. But many other “known unknowns” can rear their ugly heads. Here’s a sampling of what those voices might be saying and what you can do about them.

Unforecast Weather
The adrenaline of encountering IMC where VMC was forecast may occur with breathless, rushing panic at the sudden plunge into amorphous, indiscernible clouds. It also can rise with the slow burn of a “How can I get down from here?”
The fact the pilot recognizes the problem only after it becomes a problem is itself a problem. The preflight briefing gave you 50/50 and you figured you’d be on the winning side—even as the voice questioned the odds and asked about your escape plan. Of course, there is no ignoring the possibility the pilot received as full and detailed a briefing as there is—and it was wrong…big time. As possible as that is, it’s still unlikely that the conditions crept up on the pilot without him or her hearing from that pesky little voice.

Weather—in the form of attempting to continue VFR flight into IMC conditions, or trying to handle IMC when out of currency—remains the top cause of general aviation fatalities.

What’d They Say?
You heard the controller, clearly…you set the frequency, as you heard it…and you motor on…but…no one answers…what was that old frequency…? Or you heard the altitude…clearly, again…now you’re there…but…it seems wrong.

Our VHF radios being what they are, frequency congestion what it is, audio quality being what it isn’t…when we miss an instruction, we risk not missing something—even in VMC. Anytime the little voice questions where you are—your altitude, heading, location—it might know we missed something and that we’re reticent to show our mistake. That’s the time to key the mic and ask the controller to repeat the instruction or confess. One perennial favorite of pilots is, “Uh, Center, your last transmission was unreadable. Say again, please.” It can be difficult to keep up,  particularly on busy frequencies in high-traffic areas, which is to the point: Heavy traffic is why you’re talking to them.

Absent the answer sought by our nagging voice, we may fly into the path of other traffic, descend into an airway, or fly toward high terrain or an obstacle. Make this mistake at night and/or in IMC, and the potential to become an NTSB statistic rises greatly.

Believing the Signs
A cloud bank ahead but none was forecast; a cloud layer forecast but higher or lower or wider than predicted; a temptation to fly above an overcast—VFR On-Top—without proof the sky is passable where and when needed…say, 200 miles from now.

These scenarios all beg for immediate, detailed second looks or a new call to Flight Service or other controller who can supply some needed weather input. The voice tells you it’s not wise to motor onward thinking that in just a minute things will change…the weather will improve…the sky will clear…the clouds will lift…the sun will shine. Too many pilots do this all too often and with proportionately poor outcomes.

Instead, communicate, confess, correct. Communicate with a controller or Flight Service facility or, if no controller or briefer answers the calls on the appropriate frequency, make the call on Guard and raise another aircraft. (Per existing Notams, we’re all supposed to be monitoring 121.5 MHz on our VHF comms; FSS listens, as do security officials.) Confess the situation and seek help correcting your plight.

Common Gotchas are Worst
Circumstances where success hinges on perfect correlation between expectation and reality are everyday instances of the little voice being shut out when it should be heeded.

A recent ASRS report noted yet another aircraft that took off with more than sufficient fuel for the post-maintenance flight—as originally planned. Those plans changed, though, when consumption exceeded plan and the mission went long. At several points along the way, the pilot considered and rejected as unnecessary questions about the fuel supply. Together, the differences painted the pilot into the no-fuel corner.

This flight stayed on schedule—but used significantly more fuel. When one tak ran dry—which would not have happened at a higher altitude—the voice questioning the fuel situation got through; the pilot diverted.

The sidebars on the opposite page and above delve more fully into low-fuel situations and how to respond once what the little voice is trying to communicate sinks in. But way before you start hearing the voice, unplanned circumstances should be setting off some alarms. For example, flying longer than planned, at a different altitude, at reduced groundspeed, at higher consumption or into unexpected weather all are reasons to investigate your fuel supply and ensure it’s sufficient.

Anytime more than one question arises—or one arises more than once—the answer should automatically be, “Check it out.” That can mean a precautionary landing. Obviously, we should weigh the impact of a single change, immediately; but if the question reoccurs, resolve it by diverting.

Launching With Doubts
A friend once confided to me that he’d launched on a 700-mile flight despite his tachometer failing during the run-up. He didn’t stay aloft for the entire trip.

Doubts about the failure—was it at the tach, in the cable or in the accessory-case drive?—prompted him to divert en route. Turned out that the failure was in the tach: He would have arrived at his planned destination without issues. But he won’t ever launch again without knowing, first.

Another pilot, a charter pro, diverted quickly to an airport far short of his planned destination. The vacuum pump failed and, like the tach guy, he worried that the failure of the pump might have been because of a failure in the accessory case drive. Turned out he was right—and the airplane might have flown another hour…or five hours…or, as it turned out, five minutes: An accessory-case gear failed; debris destroyed the gears driving the mags and the cam.

As varied as the circumstances might be, the unwavering moral in all these scenarios remains. “Don’t ignore that voice in your head.” At the end of the day, you’re the only one who can judge what the little voices are saying, and the only one who can do what’s necessary to silence them.

Dave Higdon is a professional aviation writer/photographer with several thousand hours of flight time—and a few voices in his head.