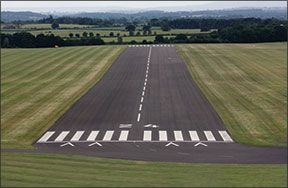 One of the most dramatic demonstrations of the ways in which airplanes handle differently as speed drops came several years ago at the hands of a Bellanca Super Decathlon. I was getting some dual, but was having trouble adjusting to its lack of wing flaps. Normally, when I want to slow down, I throw out the landing gear and then the flaps. Since none of that was working with the Super-D, my landing approaches were all over the place as I wrestled with how it managed energy.

My instructor patiently and repeatedly pointed out how the airplane would change its handling characteristics as it slowed and additional nose-up pitch was required to maintain altitude. There definitely was a distinct change in the airplane as it slowed, one so obvious even a dullard like me could sense when it’s decelerated to a reasonable final approach speed. But its behavior was a stern reminder that, as an airplane’s true airspeed slows, its behavior changes. That shouldn’t come as a surprise to a rated pilot, but it often does.

Pitch
One of the first things we notice as we slow down in level flight is that we need to adjust the pitch control to maintain altitude. That’s as it should be, since the wing won’t generate as much lift as when it was at the faster speed. Since weight is the same, we must increase the wing’s angle of attack, as depicted in the graphic at the bottom of this page, to generate the same lift as before. The specific angle of attack may not correspond to those depicted below, but you get the idea.

A properly loaded conventional single-engine airplane with a tractor (front-mounted) engine will tend to pitch down as power is removed and it seeks the trimmed airspeed. Other airplanes, with higher thrust lines, may want to pitch up when power is reduced. Designers can eliminate some of this tendency by changing angles of incidence at the tail and the wings. It’s a characteristic that’s surprised more than one would-be amphib pilot.

Either way, the next thing we notice about pitch when slowing is that the control we’re using loses effectiveness. That’s also true for controls about the other two axes, but it’s pitch that we notice/remember first since it’s the one we’re using to maintain altitude. Depending on the airplane and how far aft is its center of gravity (CG), the pitch control likely will become lighter—easier to position—than when in cruise. An airplane loaded to near its forward CG limit, however, may force the pilot to exert more nose-up pitch to counter the nose-down tendency. The lighter pitch forces we were expecting won’t exist.

Back to our conventional airplane: When slowing, an easier-to-position pitch control can be a great thing, because we’re going to need to be more enthusiastic when using it. Once we find the sweet spot balancing our need to maintain altitude and a slower airspeed, it’s time to trim off the control input to maintain the desired attitude.

Other equipment influencing the airplane’s pitch attitude when flying slowly include the wing flaps and retractable landing gear, if any. Presuming we want to get slowed down for airwork or to enter the traffic pattern and land, we’ll soon be deploying the gear and flaps. Here again, the airplane’s loading and configuration is the final authority, but lowering full flaps typically pitches the nose up, sometimes significantly. Why?

There are many different flap designs, with varying effectiveness. Regardless, basic deployment of flaps worthy of the name changes the wing’s camber and chord while increasing drag. The center of lift moves fore or aft—depending—and changes the wing’s angle of attack. You correct that and re-establish constant-altitude flight with the pitch control.

Same thing when dropping the gear, but for different reasons: Instead of moving the center of lift, you’ve introduced drag, which slows the airplane further. (Yes, you also may have changed the airplane’s CG by lowering the gear, but the change isn’t that significant.) Thanks to the added drag of the deployed flaps and/or gear, you have a choice: Either add more power to maintain the same airspeed, change the pitch control’s position, usually to something slightly more nose-up, or do both in a coordinated fashion.

Roll
Reduced control effectiveness at slower speeds also impacts our ability to keep the airplane level about its roll axis. Usually, this means we’ll have to apply a little more elbow grease to the ailerons or spoilers to maintain a wings-level attitude. But what about turning, or dealing with gusts? Same thing: Use the ailerons/spoilers more enthusiastically, especially close to the ground, as when landing.

Ever tried to raise a wing quickly while in or approaching the landing flare? It can require full deflection, and seems to take forever, right? Lack of control effectiveness rears its ugly head again: It takes either greater deflection, deflection for a longer time or both to roll the airplane at the same rate as when we were in cruise flight.

The bad (worse?) news is that aileron/spoiler deflection at angles of attack near the stall can narrow the gap between a wing’s flying or stalling. In extreme cases, deflection can take the wing right through its critical angle of attack, cause a stall and then a spin. That’s because deflecting a control in the roll axis always decreases lift on the wing you want to lower, usually while increasing its drag.

Meanwhile, the aileron on the opposite wing (it’s unlikely a spoiler-based roll-control system would raise spoilers on both wings at the same time). is deflecting downward, increasing that wing’s lift and drag. The usual result of all this control deflection and changing of the wing’s lift/drag is yaw. Modern designers try to minimize the amount of yaw produced when ailerons are deflected, usually with asymmetry: Since it usually creates greater drag, the upward deflection typically is limited to something less than the downward deflection of the opposite aileron. This is known as differential aileron design (see the sidebar above). Since the downward-deflected aileron also is creating drag, it may cancel out the other if the designer got lucky. If not, adverse yaw is the result. This is especially true when flying older airplanes, since their designers accepted adverse yaw and installed a rudder.

Meanwhile, the FAA’s Airplane Flying Handbook, FAA-H-8083-3A, points out that “finesse” can be necessary to avoid a stall when flying slowly. “For example, if the right wing dropped during the stall and excessive aileron control were applied to the left to raise the wing, the aileron deflected downward (right wing) would produce a greater angle of attack (and drag), and possibly a more complete stall at the tip as the critical angle of attack is exceeded. The increase in drag created by the high angle of attack on that wing might cause the airplane to yaw in that direction. This adverse yaw could result in a spin unless directional control was maintained by rudder, and/or the aileron control sufficiently reduced.”

A final note on control about the roll axis when flying slowly: If the airplane is equipped with spoilers, whether in lieu of or in addition to ailerons, their deployment can wreak havoc on slow-speed controllability. This is one reason the spoiler-equipped Mitsubishi MU-2 series can be a handful in an engine-out situation and why special training to fly the type is required.

Yaw
We’ve talked about yaw—the adverse kind, anyway—but what about basic yaw control when flying slowly? It’s usually done with the same control—the rudder—as at higher speed. And just like with the pitch and roll controls, it loses effectiveness at slower speeds.

Many airplanes can bring some additional air across a rudder quite easily: just add some power. Conventional singles actually are a bit sensitive to power settings when flown slowly; air blown by the propeller past both the horizontal and the vertical stabilizer side can vary their angle of attack, and thus their effectiveness. Vertical stabilizers also experience a lateral force from the prop wash, pushing the nose in the opposite direction.

Yaw control is particularly important in high-power/low-airspeed regimes, and can be especially critical when approaching the stall. In either case, one goal is to minimize or eliminate heading change. Another is to use the rudder’s full effectiveness to counter adverse yaw, which can be a greater problem when flying slowly. As with the other controls, never be afraid to use full travel on the rudder pedals.

All together now
It’s relatively easy to use our fingertips—or an autopilot—to manage most airplanes in trimmed cruise flight and smooth air. Once we begin to slow down for landing or some other purpose, we need to become more enthusiastic with our use of the controls, including the possibility of using them to their full travel to get the response we need, when we need it. Going fast is fun, but so is flying at lower airspeeds, maybe slowly enough to be able to see some details as the world goes sliding by.

Even though control effectiveness drops with true airspeed, we have the tools with which to cope. Feel free to use full travel on them if you need it, and maybe add a burst of power to help with pitch and yaw. Avoid steep, g-loading turns, which are great ways to demonstrate accelerated stalls. And any time spent at a high angle of attack while flying slowly should be done as smoothly and gently as you can muster in the conditions.