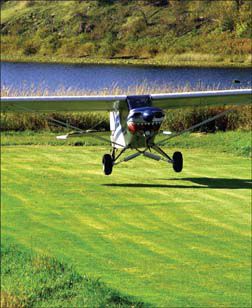 We see some version of this at least once a month: Some hapless owner runs his nice little retractable into a ditch alongside a turf runway that looked both long enough and smooth enough from pattern altitude. The fine point detail the pilot missed was that the grass was coated in early-morning frost; when he tapped the brakes, he lost it.

Thats not to say turf and retractables dont mix, but its fair to say grass runway ops involve greater-or at least different-risks than flying off a long, dry piece of pavement. Operating from what is generally referred to as a soft field evokes a certain nostalgia, but the demands of taking our airplanes back in time to savor the flavor of aviations adventuresome past are not to be taken lightly.

The fact is that becoming proficient at taxiing, taking off from and landing upon turf confers more than just some bragging rights, because in addition to the obvious benefit of improving your landing skills wherever your plans take you, there will also always be the potential advantage to be gained by introducing yourself to soft-field landing techniques for those landings (and hopefully, subsequent takeoffs) which might have to be made where your plans didnt take you, but your airplane did.

Getting In
Even if the airplane in which you first earned your wings wasnt one with a tailwheel, many tricycle-gear airplanes do make mention in their POH of soft-field takeoffs and landings. Most advise landing slowly, with full flaps, keeping the nosewheel off the ground as long as possible, lowering it gently, and using only gentle braking (or none, if field length isnt an issue). It could be argued that partial flaps might work better because the pitch change in the flare is less dramatic. Some recommend adding a gentle amount of throttle right after touchdown, to help keep the nosewheel up, as youre slowing down.

Techniques differ, but its usually best to do whatever you need to do to allow the wings to support the airplanes weight for as long as possible, while you are slowing down. On a rough field, a full stall landing is best.You want to dissipate as much forward speed as possible before touchdown. The reason for that is that the potential for damage decreases with the square of your forward speed. In particular, stresses on the landing gear will be about halved when landing at 50 knots rather than 70 knots. On the other hand, you dont want to slow so much that you sacrifice controllability, cause an excessive sink rate which could cause the front wheel (or wheels) to burrow into the ground, or worst of all, induce a stall. Remain aware of these obvious operational limitations regarding airspeed! And if the field is really soft and soggy, dont stop until youre at or near the tiedown spot, and watch out for rocks, tree stumps, gulleys, sinkholes, quicksand…well, you get the picture. That part about keeping the nose wheel up in the air (or for a tailwheel airplane, keeping that stick honked back) is really important.Assuming you arent taxiing downwind in a stiff breeze, it is usually advisable to start and maintain even just your taxiing with the controls in their full aft position. That allows the slipstream from the propeller to provide more downward force on the tail, reducing the weight on the nose wheel (or keeping the prop from hitting the ground, in a tailwheel airplane).Again, the only time this might not apply is when youre taxiing with a strong tailwind.

Getting Out
As for taking off, your instructor will no doubt have already pointed out that you have to be careful about selecting where you perform your run-up, lest your prop dislodge potential missiles of gravel and rocks, which arent kind to your propeller or your fuselage (or those of anyone behind you). Many POHs have recommended flap settings for soft field takeoffs (usually something like 10 degrees, to maximize lift). Some may be higher. (I recall that the 182Q says to use 20 degrees of flaps, although that is for short field takeoffs.) You also might not have the luxury of even stopping for a run-up, if the ground is really soft, and youre not just practicing. (Of course, if youre practicing, you should be pretending that it really is soft…) Taxiing to the takeoff end of the runway might involve traversing an area that makes you feel like youre trespassing on private property, or it might be one of your first introductions to back-taxiing (since many grass strips dont even have parallel taxiways). And as soon as you start your takeoff roll, pull back to get the nose wheel clear-or a bit forward, for a tailwheel airplane, to reduce drag. (If you did this during a takeoff from a paved runway, some might call this over-rotation.) Many advise lifting off as soon as possible, and accelerating while still in ground effect. Your less-than ideal soft field probably has a few rough spots the locals can point out to you. (And it would also be wise to call ahead to those same folks to inquire if you can even land there in the first place, depending on the time of year or recent weather. Heavy rains can turn a meadow into a mud pie.) And speaking of landing somewhere for the first time, the thing about grass runways is that they can be much harder to find: the only thing that might make them stand out from all the other rectangular fields devoted to agriculture rather than aviation is that you might happen to notice a few airplanes parked in a row inside one of them. So plan on either an early reconnoiter with a sectional (as well as the A/FD for additional information) to pre-select a few nearby landmarks for reference, or bring along that savvy flight instructor, or both. And if youre unsure and alone, theres nothing wrong with doing one of the few legal buzz-jobs that remain for a modern-day airplane, which is dragging the field-overflying the runway at low altitude to get a close-up look at what you might be getting yourself into. One warning though: whenever you do this, do not let yourself get behind the power curve!

What Are The Numbers?
My having earlier mentioned that padding factor of 25 percent-which should probably be regarded as being mandatory-brings up what would seem to be an even greater challenge: What if the field is soft and short? Well, hopefully, this is an academic question for you, or else youve been there, done that, and gotten the tee-shirt. But in case youre curious…first off, most POHs dont cover this territory.

With a short field, the usual procedure is to get to the end of the runway, hold the brakes, apply full power, let it roll and be ready to abort if anything doesnt feel right. Rotate as soon as you would for just a soft field, and climb out of ground effect as soon as you reach Vx, the best angle-of-climb speed. Once obstacles are cleared of course, accelerate to Vy, best rate. Many soft fields that are also short are likely to have a slope, and its usually better to take off downhill. If you have to wonder between downhill and downwind, waiting until there is no wind is a good idea. (If the density altitude is up there too, that also might justify leaning the mixture at full power to extract the greatest possible performance from your engine, or even better consider making a dawn or dusk departure.)

Speaking of POHs, in the real world, many grass strips will also have spots nearby where downdrafts and turbulence often lurk, which can throw off your obstacle clearance calculations.

Pick Your Touchdown Point
Landing where its soft and short (possibly because you have to) means you want to put it down as close to the start of the runway as obstacles allow.(If there were none, youd just use the POH short field approach speed.) And in cases like these, a firmer touchdown is best and not retracting the flaps is better: If its short and rough, the wheels may be bouncing around too much, and you would likely get better braking from full flaps instead. The best short and soft technique is probably a controlled steep descent using a slip, followed by the above (and if things get really tight, killing the mixture at touchdown to remove any idle thrust).

In a way, soft field operations are somewhat of a caricature of those which you perform normally. As far as the landings go, if you get used to landing soft when the situation allows it, your landing gear and the rest of your airplane will thank you, as might your passengers.