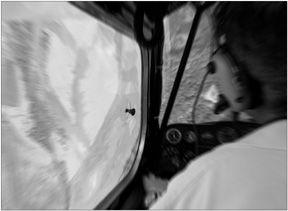 Well, okay; a little anxiety is perfectly normally when an airplane begins rotating toward the ground in a 60-degree nose-down attitude. But the thought of spin training need not cause you to break out in a cold sweat. In fact, many pilots find that the actual spin experience, while exciting and dramatic, usually isnt as bad as they imagined it was going to be. And in relatively short order, pilots learn they can squelch their natural reactions to spin entry and take command of the situation. More importantly, such pilots learn how prevent the conditions necessary for an airplane to spin in the first place.

What Is Spin Training?
Too many pilots mistakenly believe they are spin trained after performing a couple of intentional one- or two-turn spins. The practice of intentional precision spins by itself, however, offers little in the way of practical knowledge about spin avoidance during critical flight operations. Pilots so trained are really no more prepared for an accidental stall/spin departure than pilots who have not performed spins.

The signature, intentional one-turn spin is merely one of several training exercises used not only to stretch the pilots envelope, but also to train the pilot to react appropriately while under the demanding and unnatural conditions of a departure from normal flight. No course of instruction will be effective, however, if it ignores the well-understood process of human learning (defined by the FAA as a change in behavior as a result of experience).

It is in the spin-training environment where pilots can be exposed to numerous experiences specifically designed to push learning to its highest level. Since knowledge deficiencies have been identified as a central source of breakdowns in pilot performance, spin training experiences must impart information that is both relevant and useful. Stall/spin awareness training, for instance, ultimately must be tied to specific accident scenarios. Hence, training exercises must simulate actual events as realistically as possible.

True spin training–training provided by instructors well-versed in the theory and practice of high angle-of-attack flight–is but another prong in the overall stall/spin awareness strategy introduced by the FAA in April 1991 (see Advisory Circular 61-67C, Stall and Spin Awareness Training). To be effective, spin training must include at least a review of power-on and power-off stalls; turning stalls; spin avoidance with realistic distractions; spin dynamics; intentional incipient spins; spin-to-spiral transitions; and inadvertent stall/spin departures from unusual attitudes and typical accident scenarios.

Professional spin training programs for general aviation pilots typically include three to five hours of flight time and upwards of two dozen assorted spin entries. The primary objective cannot merely be to show pilots how to intentionally spin an airplane; rather, complete spin training must also focus on improving the pilots ability to recognize and avoid situations likely to precede an inadvertent stall/spin.

Additionally, though spin dynamics can be quite complicated, pilots learn that the catalyst behind spinning is simple and straightforward: yaw and stall. If an airplane is stalled in the presence of excess yaw, the airplane has no choice but to spin. This is true regardless of airspeed or the airplanes attitude. And in the vast majority of spin accidents, the yawing and stalling are pilot-induced. For example, excess yawing typically comes from the application of too much rudder. The skidded base-to-final turn is a classic example. But excess yawing can also be present during a full-power climb too, wherein the pilot holds insufficient rudder to cancel the slow flight effects of the engine (torque, P-factor, spiral slipstream). On the stall side of the equation, trying to fly an airplane in wings-level flight (+1.0 G) at Vso results in a stall. Performing a level turn with 60 degrees of bank (pulling +2.0 G) at 1.41 Vso similarly stalls the airplane, albeit with more aggressive stall characteristics.

The order in which these actions are taken is critical. The memory aid PARE can be used to ensure the correct sequencing of the primary recovery controls. Yet in spite of volumes of published spin research, FAA certification standards requiring light, single-engine airplanes to recover from spins using NASA Standard actions, and survey results showing that FAA-approved Test Pilots overwhelming apply NASA Standard actions during spin testing, some in the general aviation community still refuse to believe in the efficacy of the tried-and-true NASA recommendations.

The Air Force and the Navy, for example, believe their spin training programs to be beneficial. A representative from the Navys Tactical Air Training Branch testified during Congressional Hearings in 1980 that a significant decrease in the stall/spin accident rate in all operational modes [as well as] pilot documented saves was credited to the Navys mandatory and intensive spin training program. The results of a 1976 FAA Stall Awareness Study lend support to this: test subjects who received stall/spin awareness training plus 30 minutes of hands-on spin training did not allow the airplane to depart into a single inadvertent spin during a subsequent evaluation flight.

A noted spin instructor conducted three interesting spin training experiments during the 1990s as well. One involved 12 primary students who each had approximately 20 hours total time. Another involved 10 Private pilots who ranged in experience from 100 to 290 hours. And the third involved 12 Commercial pilots with at least 150 hours of flight time. At the end of the various training increments (approximately one month later in two of the three experiments), an evaluation flight was conducted during which the instructor induced a number of accidental spins as the subjects performed various maneuvers. Though the methodologies differed in each experiment, the results shared common traits:

1. Pilots who did not receive spin training consistently failed to recover from the spins;

2. Pilots who only received training in intentional spins were often unable to recognize the spin departures. When they did, it often took multiple turns and the recoveries tended to be inconsistent;

3. Pilots who received spin training in the context of real-life accident scenarios consistently initiated corrective actions within the incipient phase of the departure, and oftentimes immediately upon departure.

In the short term at least, contextual spin training appears able to reduce the occurrence of accidental spins during critical flight operations.

Is Spin Training Safe?
A myth that continues to circulate is the notion that mandatory spin training was deleted way back in 1949 because more pilots were being killed during spin training than the training was saving. No evidence can be found to substantiate this claim. While it is sad-but-true that the average flight instructor is neither competent nor capable of conducting spin training safely, spin training at the hands of professionals has been conducted safely for a long time.

Survey results compiled from 20 aerobatic schools in 1997, for instance, revealed that an estimated 250,000 spin entries had been performed with students without a single spin accident occurring during the training flights. Multiple thousands of spins later, that record still stands among the survey respondents.

If you elect to expand your envelope with spin training, do your homework-thoroughly investigate your options; evaluate the school, the training airplane, and the spin instructor; and dont settle for anything less than a complete treatment of the spin environment with an instructor who routinely spends a lot of time there.

-Rich Stowell is a NAFI Master Instructor of Aerobatics who specializes in spins, emergency maneuvers, and aerobatic training. He has performed more than 25,000 spins with students in 6100 hours of flight instruction.