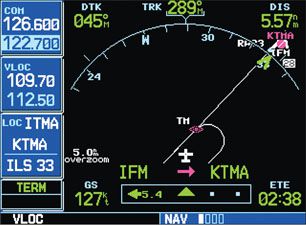 Unless youre flying out in the really wide open spaces, or you specifically ask for the full procedure, most of your instrument approaches are usually helped along with radar vectors from ATC, effectively putting you right where you need to be in order to intercept the final approach course.This is especially true in the northeast corridor of the U.S. where I fly.

My own feeling about vectored approaches is a combination of gratitude and sheepish embarrassment. First, Im grateful that ATC usually saves us the spatial reasoning headwork and mental gymnastics, but I always feel a bit guilty that someone else is spoon-feeding me, doing the work that I really ought to be doing on my own.

Getting vectored onto an IAP close to the final approach fix definitely saves time, and it makes efficient use of busy terminal airspace. But now youre actually working within another rulebook that most of us dont know too much about, and there are some behind the scenes considerations that are worth looking at.

The Rulebook
Lets start out this discussion of the vectoring rulebook with a review of some precision approach anatomy. Instrument pilots already know about the localizer, which is three to six degrees wide, with five degrees being average. Then, of course, theres the glideslope and the outer marker-or final approach fix, depending on the approach-which is from four-to-seven nautical miles from the runway threshold and is usually positioned at about the point where glideslope interception occurs. Another component is the middle marker, sited about a half mile from the threshold, normally about where youll reach Category I decision height.

Then, at least two nautical miles outside of that, there is something called an intercept point. When you get vectored onto an approach, theyre actually shortening the intermediate segment of that approach for you, and thats what theyre directing you towards.

Normally, the intermediate segment is at least five miles long, but it can be cut down to three, and if the ceiling isnt lower than 500 feet above the minimum vectoring altitude and the visibility at the airport (or from a Pirep) is at least three miles, it can be even less. If you ask, they can vector you right to the FAF (but no closer in than that, at least not until you declare an emergency and have to get on the ground now).

If its not VMC though, youll get sent to that intercept point. It would be nice if someday they published an insert on the approach plates, like the one for MSAs, that show what and where the current MVAs are. But that would give pilots too much knowledge and-heaven forbid-authority.

The Controllers Rulebook
The controller has a number of obligations when assigning vectors to the final approach course. As far as assigned altitudes, when the approach is an ILS, the controller cant park you above the glideslope or below the minimum glideslope intercept altitude for the approach. For non-precision approaches, the altitude they assign to you must allow a descent in accordance with the procedure. Keep in mind that ATC should always assign you an altitude to maintain until youre established on either a route segment or approach procedure.

Another controller consideration for vectored approaches is that they must ensure your interception of the approach course at a shallow enough angle to allow for a smooth transition. The controllers handbook says that if they vector you to a point more than two nautical miles from the approach gate, that intercept angle can be no greater than 30 degrees.

And if its less than two miles outside the gate, and if the same weather minima mentioned earlier exists, that intercept angle maximum becomes 20 degrees. This intercept can be no closer than the approach gate, unless the pilot requests it, in which case it still cant be inside the FAF.The normal limit in most situations is 30 degrees.

Now you see why I had said spoon-feeding. A guy could get spoiled! In fact, collectively, we probably are; vectors save time, but the price is usually a lower level of positional awareness.

The result is that we often find ourselves expecting a vector to the final approach course. Most of the time, we get it. But ATC can and will throw a curve or two, usually announced with the phrase, Radar service terminated.

Things To Remember
So dont get too cozy. There are a couple of things to remember. First, things happen fast. If you do the math youll see that you could still blow right through that localizer, especially if your scan is rusty. This one of the many times and places the color moving map you splurged on last year will come in very handy.

Second, on a short approach with four miles to the outer marker and a 30-degree intercept at two miles from the gate, a five-degree localizer is about six-tenths of a mile wide, and at 30 degrees, youd cross it at exactly half of your groundspeed. If your FAF-to-MAP groundspeed is 120 knots, you have 18 seconds between your localizer needles first awakening until dead center.Thats more than enough if youre anticipating it; not nearly enough if youre behind the airplane.

With a 20-degree intercept angle two miles closer in, that blow through time winds up being about the same. Be more than 10 seconds behind the airplane, and you have to roll well past a standard-rate bank to play catch-up. Though this beats a 45-degree intercept, its still no time to slack off.

Another thing to keep in mind is that the only wind blowing on your dance partner sitting on the other side of the microphone might be a fan. Any stiff breeze on or even remotely close to your tail can help blow you across the localizer faster than you can say missed approach.

Keep in mind, of course, that the controller guiding you home might very easily also be talking to half a dozen other airplanes in your general vicinity and, in addition, there is some lag in the controllers radar representation of where you are at any given moment.

Although wind corrections are usually estimated, theyre not always real close. For example, if you see that your intercept isnt happening, say so and request a better intercept vector.

Oh, and theres a third thing to remember: It may sound kind of silly, but once youre accepting vectors, you can no longer follow the procedure turn shown on the approach procedure. In fact, FAR 91.175(j) forbids it! You also cant do it when conducting a timed approach or when the procedure is specifically marked NoPT. See the sidebar on the previous page to learn when you need to fly the procedure turn.

Your Job
On the other hand, if the controller has done his or her job, and despite the spoonfeeding youre still having a hard time of it, fess up. Unfortunately at times, adherence to standard phraseology on the part of ATC personnel isnt just a strong recommendation as it is for us; it is an absolute requirement on their part.

If youve blown through the localizer (but you dont know it yet) and you hear something like 35 Romeo, four miles from the runway, one mile right of course, say intentions, your next objective at that point should then be asking for vectors to go around for another try.

Youre also obligated to go execute the missed approach procedure, of course, since youre probably seeing a full deflection on your CDI. And they sure as heck cant come out and say, Three five Romeo, this just isnt your day today. Try turning left 30 degrees to re-intercept the localizer. Well, maybe they can.