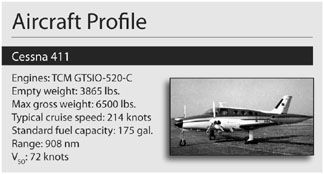 Taking risks is something we do every day; in the shower, on the Interstate or on an approach to minimums. The ways in which we manage those risks often determine whether well be around to take them again, or if some other outcome will intervene. Astronauts, test pilots and race-car drivers, among others, regularly place themselves in harms way. But they have the equipment, the training and the experience necessary to properly manage the risks they face-and they usually know what the risks are and how to react to them when they arise.

Many of us involved in general aviation are not so lucky. While we may know and understand on some level the risks we take, we often fail to prepare ourselves and our equipment for the problems likely to occur. We also tend to string together a series of risks which, individually, would not be insurmountable. But problems and risks rarely occur one by one; they usually come in sequence, presenting us with too much to handle and too little time to handle it. The results, while tragic, are often predictable. Yet, many of us continue to stack the deck of cards against us, adding to the risks we face for no good reason.

The Setting
So it was on May 4, 2003, when the Commercial pilot and owner of a Cessna 411 piston twin needed to ferry his airplane to a nearby airport for maintenance.The airplane had recently undergone an annual inspection during which it was noted that the left propeller was subject to an Airworthiness Directive with which the owner had not complied. The technician who performed the inspection noted in the airplanes maintenance logs that, The propeller must be inspected by a certified person. Completion of AD 95-24-05RI will make the aircraft airworthy. The propeller was leaking red dye. Subsequent to the inspection, the airplane had been offered for sale, but not been flown since it was completed.

The pilot, who had about 4900 total flight hours with approximately 412 hours in the Cessna 411, said in a side conversation recorded during his pre-flight weather briefing with the Riverside (Calif.) Automated Flight Service Station, Thank you very much for coming and helping I … its been four and a half months since Ive been in an airplane, I cant even figure out how to put the radios back in.

The airplane took off from the Corona (Calif.) Municipal Airport around 1430, and was en route to Santa Monica, Calif. Day visual conditions prevailed. Shortly after takeoff, the pilot checked in with SoCal Approach and requested flight following to Santa Monica. Upon initial contact with SoCal approach, the airplane was observed heading east, away from Santa Monica. When the controller queried the pilot, the pilot said his GPS indicated he was heading the correct direction. The controller informed the pilot that he was heading east when Santa Monica was to the west, and gave the pilot an appropriate heading towards his destination.

Approximately three minutes and 15 seconds after initial contact with SoCal approach, and at an altitude of 4000 feet, the pilot reported an engine cutting out, and said he intended to return to Corona. The controller observed the airplane descend in altitude, assisted the pilot with vectors to the Corona Airport, and expressed concern about the airplanes ability to maintain altitude. The pilot reassured the controller that he could maintain altitude.

Approximately three miles east of the Corona airport, the controller reported losing radar contact and advised the pilot to switch to the airport advisory frequency. The pilot acknowledged this last communication.

The airplane flew over several witnesses who were within mile of the accident site. They reported observing the airplane flying very low, at about 300 to 500 feet msl, and heading toward the Corona airport. The witnesses reported consistent observations of the airplane wobbling, then going into a steep knife-edge left bank before it dove into the ground. The accident occurred at 1453 Pacific time. The pilot, who was the sole occupant, received fatal injuries. The airplane was destroyed.

Investigation
All major components of the airplane were present at the accident site. The airplane was laying upright with the landing gear collapsed underneath the fuselage. The nose, flight deck and instrument panel of the airplane were completely destroyed. The engine control quadrant-throttle, propeller, and mixture control levers were all found parallel, in the full forward position.

The left propeller blades exhibited aft bending and slight chordwise scratches. The spinner was crushed aft without torsional twisting and with folds that paralleled the aft face of the spinner. The right propellers blades exhibited chordwise scratching and trailing edge buckling, forming a sinusoidal bend. According to the NTSB, damage to the left propeller was significantly less than that of the right propeller indicating lower energy (power) at impact. The wreckage exhibited evidence that the flaps were retracted and the landing gear was extended at impact. No pre-impact discrepancies were found with either engine.

Investigation also revealed that it was likely the left-wing fuel transfer pumps were not working as well as they should have been, if at all. A Cessna service letter dating June 27, 1967, directed the installation of wing tip tank fuel pumps intended to maintain a constant fuel supply at the wing tank fuel outlet at all times. According to the NTSB, Cessnas model 411 service manual states that the purpose of these pumps is to transfer fuel from the forward end of the main tanks to the center baffle area where it is picked up and routed to the engine by either the engine-driven pump or the auxiliary fuel pump.

The left wing fuel pumps appeared to be in good condition with intact electrical connections and were tested for operation. The left auxiliary pump and fuel transfer pumps were wired with an external power source and tested using water as a working fluid to determine if the fuel pumps worked. The left auxiliary pump operated and produced approximately a flow rate of 2.4 gallons per minute. The left fuel transfer pump operated and produced a flow rate of approximately 0.3 gallons per minute.

Further, no fueling records were found at the Corona airport. The last location of the airplane prior to its arrival at Corona was Bermuda Dunes, Calif. Bermuda Dunes records show the airplane as fueled on October 31, 2002, taking on 56.2 gallons. Witnesses reported that the airplane did not take on any fuel immediately prior to the accident flight.

The NTSB noted that the FAAs Airplane Flying Handbook (FAA-H-8083-3) discusses the effects caused by a failure of the critical engine in typical multiengine airplanes manufactured in the U.S.: When the right engine is operative and the left engine is inoperative, the turning (or yawing) force is greater than in the opposite situation of an operative left engine and an inoperative right engine. In other words, directional control is more difficult when the left engine (the critical engine) is suddenly made inoperative.

The NTSB also noted that the Cessna 411 Owners Manual states, climb or continued level flight at a moderate altitude is improbable with the landing gear extended or the propeller windmilling.

Probable Cause
The NTSB determined the probable cause(s) of this accident as follows to include: The failure of the pilot to properly configure the airplane for a one engine inoperative condition (including his failure to feather the propeller of the affected engine, retract the landing gear and maintain minimum single engine speed). Factors related to the accident were fuel starvation of the left engine, due to an inadequate fuel supply in the left tanks, inoperative fuel transfer pumps, and the pilots decision to take off without fueling.

Its one thing for a current, proficient pilot to accept an airplane with a known deficiency. Its quite another for a pilot who hasnt flown in a few months to knowingly fly a twin with several problems. The pilot stacked his own deck for this flight. Pulling the wrong card was inevitable.