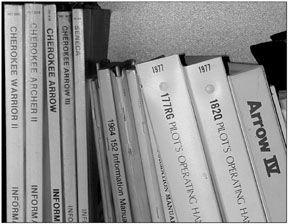 Aircraft owners/operators put a lot of faith in what we fly. Sometimes this faith is well-deserved-the aircraft getting a 100-hour inspection by a very reputable shop three times each year, for example. In other areas our faith is derived simply from a fact in chapter 5 of the Pilots Operating Handbook (POH). Is this faith well-deserved?

Short-Sighted Planning
Lets say you want to fulfill your life-long ambition of eating at one of the best stone crab restaurants in Everglades City (X01), Fla. All your emotional anticipation goes toward dining with three of your closest friends rather than the reality of the runway. Unfortunately, unless you and your three friends plan on living there after lunch you are going to have to find a way out. Runway 15/33 at X01 is 2400 feet long x 50 feet; thats not considered a long runway unless youre flying a Maule.

Of course, since you are always flying an airplane equipped with cutting-edge avionics, you have selected a 2003 Cessna 172S Skyhawk with no shortage of moving maps, GPS navigatorss, in-cockpit weather receivers, a KAP140 two-axis autopilot, etc. The day before your planned flight, you do a quick check of the airplanes takeoff performance charts. You find that, for a weight of 2550 lbs at sea level youll need 1455 feet of the runway to take off and climb to 50 feet agl. Great, you think. Ill have 945 feet of runway remaining, a 39.3 percent safety margin. Not so fast.

Heated Discussions
Unfortunately one of your buddies, Orville, is also a pilot and he asks you about the temperature at Everglades City. You tell him that he can leave his jacket in the plane because Everglades City is very warm on summer afternoons. Smiling, Orville says thats his point exactly.

If the pressure altitude at X01 is a mere five feet-using an altimeter setting of 29.92 of Hg-then the outside air temperature should be very close to 15 degrees Celsius. You call the AWOS at Marco Island (MKY), which is just a few miles away from X01, and get some bad news: The current altimeter setting at MKY is 29.42, and the outside air temperature is 35 degrees Celsius. The result is a non-standard atmosphere, which equates to non-standard performance. A good rule of thumb is that for every one degree C deviation from standard temperature, your density altitude adjustment is 118 feet.

So, with a current altimeter setting of 29.42 at X01s five-foot elevation (pressure altitude 471 feet), standard air temperature should be approximately 14 degrees C, and the actual is 35 degrees C. The actual temperature minus standard temperature equals 20.93 degrees C higher than normal. Under these conditions, its approximately 21 degrees C warmer than standard, which means about a 2470-foot adjustment for density altitude.

Getting Results
Your good but sometimes annoying buddy Orville then asks you about the short-field runway performance in your aircraft. You tell him that you did a short field takeoff for the examiner during your Private pilot flight test four years ago. He asks if that was with your current aircraft and how much runway was required. Now your head is spinning around with numbers and memorized procedures. You remember doing the items on the checklist for a short-field takeoff, but you did not remember the results. And that was with a rental aircraft, not your current one.

Perhaps out of frustration, you confess to Orville that you never measured your short-field takeoffs and always trusted (faith again) what Cessna published. You dont see any solution to this dilemma because, well, how do you measure short-field performance unless you are on a short field? How do you duplicate weight and density altitude when doing such tests?

Orville-who obviously has done this before-explains you can do the measurements with just three different density altitudes, preferably about 1000 feet apart. He shows you that, according to Cessna, the required runway length to climb to 50 feet agl with a 172S model weighing 2550 lbs increases about 14.68% as compared to sea level performance. If you determine your actual runway performance at a given density altitude-still at the 2550-lbs weight-you can then create a performance chart for all other density altitudes.

He suggests that you both do a trip to various airports in the Mid-Atlantic region where the field elevation and density altitude would change dramatically as you fly west. After landing at each airport you would top off the tanks, and have extra baggage so that your takeoff weight would be as close to 2550 lbs as you can get it. He will be the non-flying pilot to help you gather the data.

At each airport before take off, a user waypoint would be created on the beginning of the runway. With you doing the flying, he will note the pressure alititude and outside air temperature (density altitude), and when you have gotten the aircraft 50 feet off the ground hell note the GPS distance from the beginning of the runway. Distance measurement would be in .01 nm or 60.75 feet increments, more than adequate for our purposes. If the headwind component on the runway is greater than five percent of rotation speed, youll do the takeoff in both directions to average out the wind.

The two of you set off for the sea-level airport at Manteo, N.C., Dare County Regional Airport (MQI). After landing and getting fuel, you are back to takeoff weight of 2550 lbs. The temperature is 24 degrees C and Orville has calculated the density altitude at 1064 feet. The beginning of runway is created as a waypoint, and you brief yourself for a liftoff speed of 51 KIAS and an initial climb 56 KIAS. Unfortunately, the results are not impressive.

When Orville saw the aircraft at 50 feet agl, he looked at the GPS distance, .36 nm from the beginning of the runway. This means you used about 2187 feet of runway used instead of the 1669 feet of runway Cessna says is necessary. Orville explains that the 31-percent increase in runway length is due to your aircraft not being brand-new and that it wasnt flown by the Cessna factory test pilot. But a data point is a data point and the two of you go on to the next airport.

The Evil Empire Data
Your next stop on this great adventure is Martinsville, Va., and the Blue Ridge Airport (MTV) which has an elevation of 941 feet. After again landing and topping off the tanks to get back to 2550 lbs, Orville notes the temperature (23 degrees C) and calculates the density altitude at 2087 feet.He again designates the beginning of the runway as a waypoint. Even though your current density altitude is 2087 feet you still use the same indicated airspeed (51 KIAS) for liftoff and initial climb (56 KIAS). At 50 feet agl, Orville sees the GPS distance from the runway as .41 nm, or about 2491 feet.Interestingly, the distance required for this takeoff is about 30.8 percent greater than what Cessna published in your POH-1904 feet of runway required at a 2100-foot density altitude.

Orville explains that even though you have only two data points, it does not look good for X01s 2400-foot runway at a density altitude of 2900 feet.Empirical data shows that you and your aircraft need about 31 percent more runway than what Cessna published. He suggests getting a third data point at another airport so things can be calculated.

Insurmountable Problems
The third and last stop Orville suggests is the Asheville Regional Airport (AVL) in North Carolina, which has a field elevation of 2165 feet. The procedure is the same after landing and topping off with fuel. Before you get to the runway though, Orville asks about the climb gradient requirement for Runway 34. He says density altitude is 3131 feet with a temperature of 19 degrees C and wants to know if your Skyhawk can perform the recommended 290 feet/nautical mile climb to 5100 feet msl, or about a 6066-foot density altitude.

You quickly tell him that your aircraft can do a 717-fpm climb at sea level, so it should not be a problem. But Orville brings up the fact that climb gradient is the question, not feet per minute. At 6100 feet density altitude Cessna says your climb rate should be about 490 fpm. Since your best-rate-of-climb airspeed at 6100 feet density altitude is about 73 KIAS (79.7 KTAS), 490 fpm divided by 1.32 nm/minute (79.7/60) equals 368 feet/nm, or a 27.2 percent safety margin. But you are using an aircraft that so far required 31% greater runway than published.

To ensure terrain clearance, Orville suggests coordinating with the AVL tower for a spiral climb before flying eastbound. The takeoff goes as planned and a runway distance of .45 nm is noted. This is about 2734 feet of runway, 29 percent greater than Cessnas published value of 2118 feet.

Who Do You Like the Most?
After the two of you have returned to your home airport, its decision-making time. So far, it seems that you and your aircraft require an average of 31 percent more runway than your POH says. So, if X01 has a density altitude of 2900 feet, you would need 2670 feet of runway to get 50 feet agl.Unfortunately, the runway is only 2400 feet long, so your safety margin is 11.25 percent in the wrong direction. Orvilles right when he thinks the airplane will be in the water rather than 50 feet above it.

Orville suggests that the four of you remain overnight and depart early in the morning. Alternately, you could make the decision to weigh less when leaving. He shows you that a 150-lbs weight reduction-5.88 percent-will decrease the runway requirement by 11.24 percent at the same density altitude.

Orville points out a rule of thumb for determining runway length requirements for different weights: One percent less weight equals two percent fewer feet required for takeoff. To decrease your runway requirement by 11.25 percent (2670 feet needed versus 2400 feet available), you need to decrease your weight by 5.625 percent, or 144 lbs. That can be done by offloading 24 gallons of fuel, but you didnt have that much to begin with.You should invite your fourth friend to come along on the next trip to X01, but not this one.

I suggest the stone crab platter with a side of shrimp.

-Paul Sanchez (sanchezpaulk@aol.com) is a CFII-MEI who does insurance qualification courses and avionics training nationwide at his clients locations.