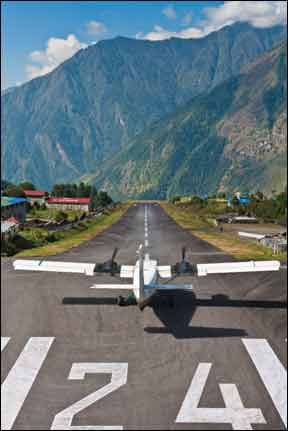 Ever wonder why we often refer to an airport as a “field?” One reason involves the relatively poor handling characteristics of early airplanes. What little was known about aerodynamics back in the day meant most airplanes were fairly unpleasant to fly and handled like the powered kites they were. Takeoffs and landings had to be into the wind, thanks to those abysmal handling characteristics. The airports in use then were, in fact, large fields, always allowing pilots to point into the wind for takeoff and landing.

Thankfully, those days are gone, although those airplanes still can be fun to fly. Meanwhile, progress in designing both airplanes and airports has resulted in beautifully engineered facilities and machines capable of using them. With the exception of seaplanes and bush operations, almost every airplane flight these days involves some kind of runway. Sadly, though, pilots aren’t always capable of staying on it, something painfully reflected each year in the accident statistics. What’s the problem, and what can be done about it?

The Problem
The good news is we’re getting better at landing, but the bad news is we still suck at takeoffs. According to the AOPA Air Safety Institute’s 2010 Nall Report, the most-recent available and which looked at accidents during 2009, “Landing accidents made up the smallest proportion of all accidents since 2003, the last time they accounted for less than 30 percent.” More good news: “The lethality of landing accidents remained below” two percent, which the report attributes to “the low and decreasing speed of the aircraft and the fact that positive control is generally maintained until very close to the initial point of impact. Being on, or at least close to, the runway usually eliminates most obstacles.”

The report goes on to note “It is possible that many pilots underestimate the risks inherent in the takeoff phase, when aircraft are operating at high power settings and angles of attack while accelerating close to the ground.”

In the sidebar on the following page, we’ve listed some likely issues pilots may have with their takeoffs and landings. That part’s easy. The hard part is coming up with reasons you may be having trouble with your own runway operations. Let’s take a look at some of the possible causes and how to fix them.

Planning
The first thing that comes to mind when considering any accident involving what should be an otherwise routine operation is the pilot’s failure to plan. Landings and takeoffs are no different.

In addition to considerations like runway length, contamination and expected airplane performance, planning a takeoff must consider obstructions to either side of the runway area and at the departure end, plus what we’ll do if things don’t work out as planned. One thing omitted from this list is the wind, which we’d guess has as much impact on “runway loss of control,” or RLOC, accidents and incidents as anything. We’d also add to this list the pilot’s failure to make adequate control inputs.

While the sidebar at left comprises a fairly comprehensive list of the things we can do wrong on takeoffs and landings, it perhaps doesn’t emphasize enough the wind’s effect on our runway operations. On those rare occasions when there’s no wind, the air is smooth, and we should be, too. Other times, we need to plan ahead.

For example, a crosswind from the left during takeoff will cause the airplane to weathervane even more into the wind than normal. The combined effects of torque and P-factor will work against you even harder when the airplane naturally wants to turn in that direction in the first place. This is something we should realize from the ATIS/AWOS or from examining the windsock from pattern altitude.

At the same time, we also need to consider the mechanical effects of wind flowing over and around obstructions like buildings and trees, and plan accordingly. The results of wind flowing past obstructions often can be a roiled mess of turbulence, existing only to foul up our well-planned operation. Of course, it’s not so well-planned if we forgot about the wind’s effects. But we do need to get on and stay on the flight controls—more about them in a moment—if we’re to have a chance at pulling out a good takeoff or landing.

Airspeed Control
Establishing and maintaining airspeed control mostly applies to landings, but it’s important on takeoffs, too. For example, attempting to lift off too early, before the airplane has reached flying speed, can result in poor control effectiveness—you may not have sufficient aileron or rudder authority to correct for a crosswind, resulting in being blown downwind. You’ll also spend some time in a too-high pitch attitude, creating drag and preventing the airplane from accelerating as it normally would. The cure is to establish the proper liftoff attitude and allow the airplane to fly itself off, when able.

On landing, airspeed control is even more critical, since it helps determine how much runway we’ll use. Each airplane comes with a published speed pilots should fly on final approach, but we often find ourselves adding a knot here and there, for “safety.” There are good reasons to add a bit of speed in gusty conditions, as a way of countering windshear. The rule of thumb we’ve always used is to add no more than half the gust value, if any, to our normal final approach speed. No gusts? No addition. Remember, too, that the manufacturer’s published approach speed is for a gross-weight airplane. By definition, we never fly an approach at maximum gross takeoff weight. Most of our landings are at substantially below gross and speeds should be adjusted accordingly.

Finally, many pilots may fly a too-high speed from fear of stalling. That’s wrong. Yes, there’s a stall speed, but what stalls the airplane is exceeding the wing’s critical angle of attack. To counter this bad habit, go do some slow-flight work, at altitude, and take full notice of how far from stalling the airplane is at its normal approach speed in, say, a 200-fpm descent. Then modify your approaches and landings to suit.

Controls
Once we lick our planning and airspeed control shortcomings, the third trick in our bag of ways to improve runway operations is to ensure full and proper, coordinated use of the flight controls. At their root, RLOC accidents/incidents mean we’ve somehow failed to use the tools available to their fullest extent, and those tools—along with power and braking—are the flight controls.

One of the ongoing problems many pilots may have is the bad habit of using the aileron control as if it were a car’s steering wheel. In the air, the analogy isn’t a good one; on the ground, it can be disastrous. The sidebar on this page adapts a diagram used by the FAA to depict proper control placement when taxiing in stiff winds. When considering aileron use during takeoffs and landings, we’re generally talking about compensating for crosswinds. How we do that isn’t rocket surgery: We need to keep the upwind wing—the one on the side of the airplane from which the wind is blowing—level or slightly lower than level in order to compensate and minimize our need for rudder. Apply full aileron early in the takeoff roll and gradually relax the input as speed builds, making both it and the rudder more effective. A good crosswind liftoff comes with some amount of aileron input still being applied.

And rudder use should be enthusiastic, especially when flying a taildragger. Again, full rudder early in the takeoff roll may be needed. However, we’d suggest needing full rudder as speed builds on the takeoff is a good indicator it’s too windy—it might be best to abort, presuming there’s enough runway, and wait until it’s not as windy.

Finally, remember what we mentioned above, about planning. We already know which way the wind’s blowing, so we should not be surprised when we need to continue flying the airplane all the way to the ramp.

All Together Now
And that’s really one of the keys when it comes to preventing RLOCs: Fly the airplane all the time. Relaxing our guard just because all the wheels are on pavement and we’re decelerating also may be a central cause of RLOCs.

Preventing them starts on the ramp or in the pattern, when we plan the operation. Then, it’s just a matter of controlling our speed and ensuring we use all the flight controls to get and stay on the runway.