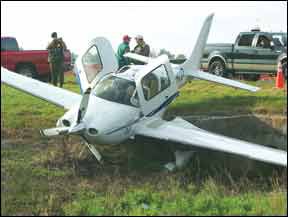 Are we at risk of things that never happen? Can we be hurt by what we don’t know? The answers are “Yes” and “Yes.” From the start of training, one thing our instructors and mentors try to infuse in us is that knowledge is power, but only if we suitably use that knowledge and apply it to the tasks at hand. Conditions—of the weather, to be sure, but also the airplane and facilities we plan to use, as well as our own skills—tend to drive the risk to which we’re exposed. And the more conditions depart from the expected, the greater is the risk of something going wrong.

The antidote is to do what we’ve always been trained to do: Assess conditions, our preparedness to face them and our ability to meet the challenges of our decisions on a flight-by-flight basis. Recognizing this need serves as the foundation of personal risk assessments and enables us to understand our own circumstantial personal limitations. One trick is creating your personalized go/no-go parameters and applying them as part of your flight planning. Along the way, we re-evaluate, always recognizing the potential of flying in higher-risk circumstances and the need to formulate a Plan B for predictable contingencies, even as we prepare to advance to Plan C, if needed. In the end, it’s about knowing what to expect, the potential impact of changes and how well we believe we can handle the spread. Let’s explore.

Pilot/Aircraft Assessment
One way to develop your own risk-assessment methodology could involve four basic parameters, with others employed as needed, based on conditions. My basic four include pilot currency in the expected conditions, chances of those conditions worsening, the potential costs incurred if they do and the availability/viability of alternatives to avoid the identified risks. We can break these down further into aircraft, airport, en route and approach considerations. As an example, let’s look at aircraft-related risks first.

One of the first things I want to know about the aircraft is what, if any, equipment is inoperative or not working as it should. A no-go example might include lack of a glideslope for the ILS I’m pretty sure I’ll have to shoot at the end of the day when the weather’s bad. One of lesser importance—but of no less concern—might involve an inoperative back-up system or instrument, like an electric-powered artificial horizon in a vacuum-driven panel.

Judging by the accident record, fuel remains a concern also. Ask yourself: What risks accompany arriving at the destination pattern with FAA minimum VFR fuel on board? Presume conditions are day VFR. A blocked runway, resulting from someone else’s flat tire, gear-up landing or ground loop could force a change of destinations, if one’s close enough to reach and land on just 30 minutes of fuel. While you’re thinking about that, remember the 30-minutes-of-fuel requirement is at cruise. If your airplane is like most, it will burn considerably more when full or climb power is being used, like on a go-around to divert to another airport. By the time you get there, you could have substantially less fuel aboard than you planned.

The aircraft’s characteristics, as well as the pilot’s, also figure prominently in this equation. For example, runway performance (at both the departure and arrival airports) may be a concern: Will the airplane have enough runway with the fuel and loading needed for the trip in the conditions of the day? If not, take on less fuel and build in an earlier stop. How experienced are you in this type? The more time, the more latitude you get in handling dynamic situations in complex circumstance. With only a few hours, though, you should allow less room for deviating from your personal limits.

And about that experience, how recent is it? If you’ve not flown a long cross-country lately, or not flown much at all, is it wise to make your return a max-range flight? To a new airport? At night? Maybe a time to alter plans. Also, if you haven’t flown a back course or NDB approach recently, do you really want one to bookend an IFR trip? If the answers here aren’t favorable, how many of them will it take for you to come up with a Plan B, perhaps a different destination, or day?

Airports/En Route
We’ve already considered the runways we’ll use, but what about the airports themselves? Unless it’s day VFR, departing toward terrain 2000 feet or higher than the runway is not attractive; ditto for arriving at the destination. When night or IFR, consider a different time or day.

What about where the airport is situated? One near a large body of water could easily experience adverse conditions while others nearby remain CAVU. This is when you’ll want a good handle on the temperature/dewpoint spread. My rule of thumb is if it’s less than five degrees during the day or 10 at night, the risk of the two temperatures merging into fog bears close monitoring. What about ceiling and visibility: Can you even get there, and once you do, how far away will you be able to spot the airport?

Finally, winds—their speed and direction—can be critical, especially when high terrain is nearby, or that previously mentioned body of water. Even when they’re straight down the runway, winds can impact our flying by generating low-level wind shear and turbulence. Crosswinds, of course, are another matter; what are your personal limits and how do they compare with the airplane’s maximum demonstrated crosswind component? If the runway is one-way—uphill, for instance—but the wind isn’t cooperating, what will you do? Again: How many of these factors need to add up before reconsidering Plan A?

A lot of this matters in the en route environment, too. Take convective conditions…please. It’s never a good idea, daytime or night in particular, to try engaging them unless you have the proper tools—on-board weather radar, an sferic device (Stormscope/StrikeFinder) and/or Nexrad via datalink. And just as important to having this equipment, do you know how to use it confidently, consistently? The only good thing about most thunderstorms is they can (and must!) be circumnavigated, unless they’re forming in squall lines. If they are lining up and marching across your path, the best thing to do is put the plane in a hangar until they pass. The air behind them will be cooler and cleaner. And if you’ve been living right, you might even get a tailwind out of the deal.

With these and so many other considerations to think about, once again we’ll ask: How many variables have to go wrong before you take a deep breath and realize your original plan isn’t going to work and you need to do something else?

Of course, your destination is an airport lacking a published instrument approach, and the nearest runway with one is five miles away. What’s a pilot to do? You can always start the published approach to the other runway and, if conditions allow, break out below an overcast in visibility letting you proceed to your desired airport. This certainly would fit the definition of marginal VFR, but should be manageable if you know the territory. Right?

Maybe. We’d want a 1500-foot overcast and five miles or better visibility, as our minimum. Stay out of the clouds, and out of special-use airspace, and you can legally cancel and proceed VFR. If you don’t mind showing a little moxie, you can even ask for VFR flight following when you break into the clear and call to cancel your IFR flight plan. That ability has been the savior of many a pilot who wanted to land a few miles away from the airport with the approach.
But what if both the ceiling and the viz are headed downhill, the strip on which you want to land isn’t well-lit and it’ll be dark by the time you’re cleared for the approach? Yes, the destination has a rotating beacon, and you should be able to see it once you break out. But you still need to stay in legal VFR between cancelling and landing. Are you certain you can do that?

Meanwhile, remember the weather’s going down. It wasn’t in the forecast, but there it is: Missing the approach is a real possibility. Fuel’s tight, of course, and the alternate isn’t look too good right now, either. Do you really want to go missed and hold, and then off to an alternate starting with FAA-specified minimum fuel? What if you can’t get into the alternate? For some pilots, the answers are simple: Don’t go or don’t arrive with IFR-minimum fuel as calculated per the regs. Instead, stop, top and arrive with an excess.

It’s these kinds of things—layered on top of each other—that we need to think about. Too often, pilots don’t think at all and blindly motor off toward the unknown, secure in the thought they have a good plan, even after changing conditions have made it moot. What to do?

Piling On
The thing we’ve been trying to hammer home is this: You can have the best airplane, the most-recent skills, all the fuel you could possibly want and a great forecast, but somewhere along the line things can go wrong. Often, it’s not just one thing, but several.

Headwinds can slow you down, making you consume more fuel and forcing a nighttime arrival to a poorly lit field. The weather you were counting on beating will get there before you do. And it’s been a while since you shot the NDB to that runway—or even a non-precision approach in anything other than good daytime VFR under the hood. And you forgot to update your GPS navigator’s database, so you really don’t know if you’re set to fly the right approach, anyway. Is all this really a good idea? When do you say “enough” and firmly, smoothly go to Plan B?

Will it be when you realize the weather’s caving? What about when you’ll arrive with less than an hour’s worth of fuel? Are you even current at night to carry passengers? How many of these little things will you be adding to the stack before they become overwhelming, forcing the whole thing down on your shoulders?

The NTSB’s accident reports are filled with scenarios like this. Reading them, one wants to reach out to the pilot and strongly suggest he or she turn around and land at that just-passed airport, the one with fuel and a hotel. Which pilot will you be, the one flying the accident report or the one reading it?