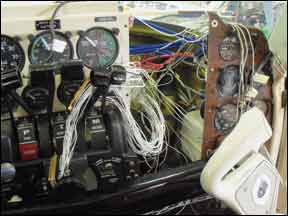 From my perch on the shop level, I see two types of airplanes and pilots: First, there’s the pilot who thinks nothing of flying the clag with a tired and vulnerable audio system and avionics suite left over from the Nixon administration. We’ve all heard him—the guy with the garbled and distorted audio that barely gets him taxi clearance to the runway. On the other end of the spectrum is the owner who’s invested twice the value of the aircraft in ultra-modern avionics including a high-end audio panel plus a generous set of $1200 Bose headsets for every seat in the cabin.

What do these pilots and their aircraft have in common? Neither might be prepared to troubleshoot a failed audio system on the fly. Effectively dealing with audio failures and avoiding them in the first place takes some planning, a touch of system knowledge and in many cases a modest investment in the right kinds of backup gear. Here’s some tech-level advice that might better prepare you for the dreaded and unsuspecting in-flight audio system failure. For nagging noise and performance problems, be prepared to start in the engine bay and outside the aircraft, because that’s often where problems originate.

A Sharp Eye On Antennas
The condition of the aircraft’s communication antennas might speak volumes about the performance of the radios to which they’re connected. These antenna systems are often overlooked in both troubleshooting and major system upgrades. The same can be said for the runs of cabling connecting the antennas with the com radios (each almost always has a dedicated antenna system). Replacing coaxial antenna cables is often a deferred task because of the accompanying induced sticker shock. That’s because the cabling is buried deep in the airframe and removing major portions of the interior to gain access is the daunting task that tags along with the job.

Remember these cables may be original to the aircraft and like any other system in the aircraft are prone to deterioration. And even if you don’t recognize obvious performance problems old signal cable can create, replacement offers several benefits. First, older airframes that haven’t been upgraded might have old RG58 cabling that offers little if any shielding from stray noise that lurks in the airframe. Newer RG400 and RG142, for example, is twin shielded cabling that’s a good defense in keeping nuisance electrical noise out of the com systems. This is noise that’s often generated by servo motors, strobe-light power supplies or other systems. When installing performance-critical avionics like traffic-alerting systems and ADAHRS systems, replacing old cable is often a necessity.

The antennas themselves are often ignored and, while some might look healthy at a quick glance, they could induce frustrating gremlins into the system. I recall an owner of an otherwise well-equipped and modern stack of radios who played cat and mouse with deteriorated com radio performance whenever he flew in IMC. He’d take off into the weather and after a short time lose reception on the better of his two radios, a newly installed GNS530. This was posing a serious threat to safety for obvious reasons. He’d then fly a trip in clear skies and come back with shrugged shoulders boasting at how well the system worked.

Now we all know the old saw that airplanes don’t fly any differently in rain or clouds. But when it comes to radio waves this theory isn’t exactly fool-proof. That’s because most fiberglass communications antennas are coated with a protective anti-static layer that helps eliminate static build-up that often occurs when flying in certain atmospheric conditions. Since antennas live hard lives out in the elements, the coating eventually wears off and radio performance slowly begins to suffer. Moreover, as sealant around the base of the antennas breaks down, moisture can become trapped between the antenna’s base and the airframe skin, compromising the important ground plane that’s required of sound performance. Worse, it can also be a source of corrosion. If your shop suggests antenna-system replacement, it’s probably time to make the investment for the sake of improved com performance.

Rat’s Nests, Charging Systems
And I mean rat’s nest. After nearly 25 years of becoming intimate with the avionics in aircraft of all types, I’m often still amazed at what lurks behind the panel in many aircraft. Consider that not all avionics retrofits are created equally and as layers of new wiring are laid into place, things can get pretty unruly behind the average instrument panel. Consider, too, that older audio systems might not be connected with shielded audio wiring and might not be designed to shield the various sources of interference existing in today’s world.

Case in point is the owner of a single-engine Piper that consistently and dangerously loses com reception in a communications-critical location that happens to be in close proximity to cellphone towers. After repeated visits to the shop—who finds seemingly good working com performance during testing—the aircraft continues to suffer failures near those cell towers. If what the pilot is telling me is true, I’d have to say it’s a classic problem of poor audio-wiring shielding.

It’s tough to imagine, but overwhelming noise in the overall audio system can be a telltale sign of a faulty battery. All it takes a single faulty battery cell to create ill-sounding audio. Further, the lack of or a faulty alternator noise filter (a capacitor usually connected to the alternator output) might be the reason you hear that high-pitched whine in the headphones. A faulty diode that’s internal to the alternator is another culprit.

Lastly, cleaning up the rat’s nest also means equipping the aircraft with decent headsets. It’s also not smart to keep unoccupied headsets plugged into audio jacks. Some microphones may be sensitive enough to pick up enough noise to open the squelch on the intercom or cause a crackling static that can drive you nuts. Before rushing into the shop complaining of such odd symptoms, be sure to unplug all headsets.

Box Failures Happen
Luckily, total box failure is a rare event but it can happen. Audio system manufacturers attempt to remedy the consequences of a box failure by building in at least some fail- safe functionality. For instance, PS Engineering designed their intercoms early on for fail-safe functionality where an intercom failure won’t cripple audio communications. But fail-safe requires at least some pilot interaction and to effectively handle the failure, you need to know some theory of operation.

For the PM1000-series intercom (and most of the company’s integrated audio panels it works like this: If you suspect a communications failure, first attempt to bypass the intercom by manually switching to fail-safe mode: either turn off the unit or pull its circuit breaker. Once in fail-safe mode, the pilot’s microphone input connects directly to the aircraft com radio output while the radio’s audio is routed directly to the headphones. Depending on the com radio, you might not have a sidetone (the sound of your voice as you key the transmitter), but this method can likely restore communications or at least be an aid for troubleshooting on the fly. Understand, too, that when in fail-safe the copilot and all other passenger audio stations will be inoperative. Some intercom installs have a set of emergency audio jacks that bypass the intercom altogether. Do you know where they are?

If you fly a completely integrated glass panel like the G1000, all of the communications radios, called LRUs for line replaceable units, are hidden behind the scenes somewhere in the airframe. A total failure of an LRU—or a software corruption somewhere in the chain of command—can render one or both completely inoperative.

Worse, display failure can make communicating and aviating a real chore. It’s worth having a thorough understanding of what to expect in these situations. For example, do you know what frequency is stored in the com radios should your displays go dark? Some systems retain the last stored active and standby frequencies while others revert to 121.500 MHz. Best to hit the pilot’s guide for the system you fly.

Garmin’s GNS and GTN integrated navigators are smart enough to warn of com problems. A “COM NEEDS SERVICE” warning might flag in the unit’s message bank. Don’t ignore this—it could be a get-out-of-jail free card. And these units aren’t immune from display failures that can hinder the ability to tune a frequency.

Again, a “DISPLAY FAILURE” message usually warns of this. But if you know how to enter manual display backlight adjustment mode, you might be able to squint your way enough to increase the display brightness to get you tuning again.

Just Because You’re Paranoid
As you can see, there are plenty of variables that can contribute to audio failures and marginal performance. Just as you prepare for engine failure (or electrical failure; see the article beginning on page 4), you should also have a solid plan for audio failure. You don’t need a high budget to prepare for the worst. Portable push-to-talk switches can be had for under $50; auxiliary com antenna systems for plugging in your portable can often be included in ongoing avionics projects for well under $500.

Accept the extra costs of cleaning up old wiring when your shop speaks up—at least some clean-up should be part of most major retrofits. While you’re at it, keep the charging system healthy with routine maintenance and address abnormal conditions that threaten audio system integrity.

And lastly, if you fly with a high-end audio system that cost you a bundle, don’t get trapped into a false sense of security. Any system is vulnerable to failure but if you’re prepared, it should be a non-event.