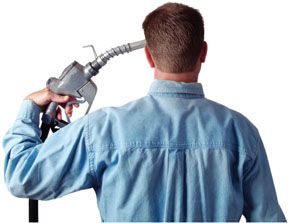 If youre like me, youre somewhat still in shock over aviation fuel prices. Less than five years ago, I figured it cost around $40 an hour in fuel alone to run my airplane, an IO-520-powered Beech Debonair. Now, its closer to $100 an hour and I havent seen a similar increase in my income or my airplane budget to support the higher costs. My basic $100 hamburger or crab cake is now at $200, and climbing.

With avgas at my local FBO having recently punched through the paper-thin ceiling of $5 a gallon, my flying is way off these days. The last time I did any serious aviating, I discovered several layers of rust had accumulated (the weather was good and the route familiar, or I might not have made that flight). Yet, I loathe airlines more than I hate to pay usurious fuel prices and I still have to travel, for business and personal reasons. How will I maintain proficiency? Again, if youre like me, youre looking for some ideas so that-even if you cant fly as much, youre just as safe. Lets run through a few strategies designed to keep you safely airborne with dinosaur juice in your tanks.

Simulators
The first and most-obvious way to maintain proficiency without burning a lot of avgas is to use a simulator to hone skills and polish procedures.Unfortunately, while simulators cant be beat for many training tasks, using one to maintain all forms of proficiency can leave a lot to be desired.

The first issue to confront is the strong likelihood theres no simulator near you that closely mimics your airplane-forget about duplicating your airplanes panel and equipment in a sim. Often, the closest youll be able to get is something approximating the type of airplane you fly-a high-performance single, for example, or a light twin. Sims for higher-end aircraft-generally turbine-powered-more faithfully duplicate what youre flying, but youll also have to range further afield to find one.

Although even the generic simulator seeking to mimic your high-performance piston single is better than nothing, it can leave a lot to be desired.Especially if its been a while since you flew a sim, theres a learning curve to conquer and-depending on how much time youve dedicated for your initial sessions-the juice you extract in beneficial training simply may not be worth the squeeze in time and expense. On the other hand, if youre a regular at your local FBOs training facility, your learning curve might be a lot flatter. Of course, if fuel prices continue climbing, this calculus may work out for you.

Naturally, there are different options in the simulator world, just as in aircraft. The sidebar on the opposite page details some of the various choices and considerations.

One option that might be attractive is something in the way of a roll-your-own simulator experience. While using something like Microsoft Flight Simulator on a home PC to maintain proficiency isnt the best solution in our book, doing so can be productive, especially for lower-time Instrument-rated pilots. The real value here is in practicing and honing various instrument procedures, like departures, arrivals and approaches. Especially approaches.The value-which we wont overestimate, especially since you cant log the time-comes in practicing the sequence of events on these various procedures, not in the so-called stick time you might accumulate.

Buddying Up
I used to fly enough to stay current for IFR. Nowadays, though, its a struggle. An obvious solution is to spend more time under the hood with a proper safety pilot. As in the past-e.g., before $5/gallon avgas-the basic idea is to grab someone you feel comfortable putting into some position of authority aboard your airplane and blasting off for an afternoon shooting approaches. Another idea is to find someone going in the same general direction as you are and flying the trip under the hood.

Using a safety pilot, though, can be anything but safe. In fact, Ive long though that one of the most dangerous things in aviation is two pilots trying to fly the same plane at the same time. These days, Ive flown my bird single-pilot so much, that I just ask any pilot in the right seat to let me do everything, sit back and relax. This goes for 20,000-hour airline captains as well as 15-hour students-sorry, but I know what I want to do and how to do it. So, before blasting off with a safety pilot for some instrument work, I make sure theres a clear delineation of responsibilities.

In this scenario, my idea of a safety pilot is someone whos looking out the window to make sure I dont swap paint with anyone. I can keep the shiny side up, handle the airplane and deal with ATC just fine, thank you. What I cant do is watch for traffic and stay with the Foggles at the same time.Your idea may differ, of course, and thats when you need not only a plan for where youll fly and what youll do when you get there, but also for who will do what and when.

I remember flying as a safety pilot with a close friend several years ago.The afternoons mission was to get him some hood time while we motored out to a remote strip nestled in the hills west of Washington, D.C., for lunch. He was doing fine, and there was little traffic, but when he lifted the hood for the visual, he was astonished-and his Warrior quickly gained a couple of hundred feet-when he realized he wasnt over flat land anymore. Thats not a crisis, to be sure, but the moral is for everyone to know what the plan is and to change it only after detailed discussion.

For example, will your safety pilot handle any cockpit chores at all? If so, which ones? One way to divvy up responsibilities is to draw an imaginary line on the panel-everything on the left side is your responsibility; everything on the right is the safety pilots. Regardless, under what circumstances, if any, will he or she take the controls away from you if necessary? How? Have you defined necessary?

The reason the FAA requires a safety pilot for hoodwork is because it takes two pilots. But when neither of them is accustomed to working with another pilot, strange and not-so-wonderful things can happen.

What About The Airplane?
Even after getting some sim time and buddying up with other pilots to make the most of your training, you probably wont be satisfied with either the cost savings or your proficiency. After all, theres really no such thing as being too proficient. The only real solution is to fly the airplane as you did when avgas was cheaper. Is there anything you can do to the airplane to help reduce the cost of operation? Absolutely.

Depending on what youre flying and how youre flying it, a few simple changes in procedures can help reduce your fuel costs. For example, by running my engine at a lean-of-peak-EGT (LOP) setting, I can save roughly four gallons an hour in cruise. Not only does running LOP vastly extend my range and endurance without giving up much in cruise performance, the engine runs cooler and cleaner. To do LOP correctly, you may need to invest in balanced fuel injectors or an electronic engine monitor, but these purchases can quickly pay for themselves in fuel savings and other benefits.

If youre lucky enough to have an airframe for which aerodynamic mods are available, you might consider them. Adding products like improved cowlings and more streamlined wheel pants can really help both climb rates and cruise speeds, enabling you to go farther on the same fuel. Or the same distance on less. Removing, relocating or replacing older, draggy antennas can help, too.Make things like cowl flaps and landing gear doors close as they should to reduce drag. If youre carrying around a bunch of unnecessary weight-tools, parts, mothers-in-law-consider leaving them in the hangar. Ensuring the airplane is rigged correctly can pay huge dividends in speed, improved handling and reduced fatigue on long flights.

Additional fuel tanks may be available for your airplane. One of the most valuable modifications Ive made to my bird was to add tip-mounted fuel tanks. They enhanced operating flexibility, range, endurance and safety while enabling me to search out cheaper avgas and fill up, even when I dont need to. If, like mine, your airplane is eligible for a gross-weight increase by installing tip tanks, its a no-brainer. Youll quickly realize the increased value and overall operating flexibility. Not to mention the ability to tanker cheaper fuel. And being able to skip a fuel stop on a long trip can easily save you an hour or more of time on the tach.

Finally, you can always consider buying a more fuel-efficient airplane. If youve got too much airplane for your typical mission-say, a twin or a six-seater-and you normally fly solo, trading down could reap huge benefits in reduced operating costs.

Making The Most
So, where does all this leave us? Weve taken steps to line up the necessary sim training, weve found the cheapest gas along our route, weve cleaned up the airplane, added auxiliary fuel tanks and adopted LOP as an operating procedure. What else can we do?

On thing is to slow down and fly higher. Flying at a reduced power setting-whether because you pulled back the throttle or because you fly your normally aspirated engine at a higher altitude-saves fuel. Theres a trade-off, of course: Flying more slowly will take you longer to get to a destination. And burning less fuel for a longer amount of time may not reduce your overall cost of operation. The fuel needed to climb to a higher altitude may erase any savings realized in cruise, also.

Youll have to do the math on your airplane and your missions to decide whats the best solution. Even the simplest flight planning software can make this calculation an easy one.

Like me, youll probably still be flying less than you were a year or so ago. You may also find yourself willing to depart with less fuel aboard than before. That kind of decision can be the first link in the accident chain.

Someone we know recently ran a tank dry after a long cross-country. The tank ran dry on short final with the gear and flaps down because he got behind on his tank-switching procedures. There was plenty of high-priced fuel aboard, but it was in the other tank. After switching tanks, he landed safely, but the post-accident downtime would have really impacted his proficiency.

Also With This Article
“Simulators And The FAA”
“Finding Cheap(er) Fuel: Do It Online”
“The Mogas Option”