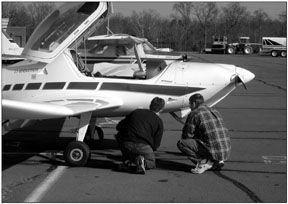 Hes such a careful pilot. What does that mean? For some, it conjures the image of a high-time airline captain, confident and astute at the command of a massive airliner and providing a ride with nary a bump to ripple the drinks or rouse from sleep the hundreds aloft under his or her care. For others the careful pilot never flies a single-engine airplane at night, never flies into IMC after dark, and avoids flights over mountainous terrain or water. At another extreme, many might not think of the aggressive fighter jock or low-level aerobatics pilot as being careful, even though their survival requires exercising the greatest care. And, Id like to think most pilots consider their instructors to be careful pilots.

Artificial operating limitations, however, erode the vast utility that aviation provides. Being careful in an airplane does not mean abolition of one flight regime or another. Instead, it denotes making intelligent decisions about how and when to fly. So how can you be a careful pilot?

The Work-Study Plan
The decision chain leading to an accident very often begins well before the airplane leaves the ground. For example, fully half of all weather-related mishaps leave no evidence of a preflight weather briefing. Prolific fuel-related crashes (fuel exhaustion, contamination and fuel starvation) point to rushed preflight planning, incomplete preflight inspection or lack of time spent becoming familiar with system operation and limitations.

But flight planning really begins well before you arrive at the airport.For example, when was the last time you took an objective look at your recent flying experience? If you havent flown in a while, what should you work on (crosswinds, non-precision approaches, stalls, etc.) that you havent performed recently? Apply a dispassionate look at your recent experience-if you havent flown in a stiff crosswind lately, using that short strip with the 90-degree cross for a gross-weight takeoff may not be the best idea.

How current are you in keeping up with your airplanes paperwork? In addition to dedicated periodicals like Aviation Safety, spend a few minutes once a month or so reviewing your POH or its equivalent. Pay particular attention to the sections covering Limitations, Systems Description, and Handling, Servicing and Maintenance-know these and you will truly know your airplane.

Also, how knowledgeable are you about the avionics in the airplane youll fly? Gone are the days when every airplanes navigation systems worked pretty much like every others. Modern avionics, autopilot and flight director systems are generally not very user-friendly; each manufacturer designs features and an interface it feels are most important. This means every time you change from one system to another you need to unlearn habits from other systems. It takes time to get up to speed and retain currency in technically advanced airplanes-much of it will be time spent with the manual on the ground.

Pre-Flight Planning
The level of detail to which you plan an individual flight may vary based on the environment and your familiarity with the trip, but before launching on even a short local flight the careful pilot will know basic things like the time aloft available based on fuel on board, including a healthy reserve, and how much runway is required for takeoff and landing given existing conditions. Other operational items the careful pilot will know before turning the key include the engine temperatures to expect in each phase of flight, how much weight the airplane can carry, and where it can be placed in the airframe, while staying within its design envelope. If departing your local flying area, do you know what minimum cruising altitude applies to each route segment?

Of course, weather is what gets most pilots into trouble. Careful pilots are also weather junkies, in the habit of knowing, at least roughly, what the weathers doing around the entire country. The careful pilot knows not only how to get a weather briefing from various sources and read weather forecasts, he or she also develops a feel for how weather develops and moves.Watching The Weather Channel or checking online and printed sources every day will help you understand weather trends that will serve you well when actual weather begins to deviate from the forecasts.

In The Cockpit
Despite all the innovations in modern flying, pilots are rather unimaginative in finding new ways to bend metal. By contrast, the careful pilot exercises good discipline while in the cockpit.

For example, we all know were supposed to use checklists. We also all find it difficult to use checklists in the cockpit, and many of us discard the practice once leaving the ground, especially after the most recent checkride. Thats because printed checklists are often unfriendly to a busy single pilot. Consider instead the technique used in airline cockpits, the flow pattern. When acting as pilot flying (which, in single-pilot operations, we do full-time), use your training and habit patterns to set airplane configuration. Once you feel youve completed all required actions, use a flow pattern check to make sure youve not missed anything-start at one point and methodically move across the entire cockpit to verify everything is configured the way you think it is for your phase of flight.This second look should help detect any omissions, but requires practice and discipline to perform the flow check every time. If time permits, use a checklist as verification.

Another airline concept perfectly suited to single-pilot operation is the sterile cockpit. In sterile cockpit operations, all extraneous tasks are delayed and nonessential conversation is discouraged to ensure full concentration is applied to the task at hand. Airlines mandate a sterile cockpit anytime within 10,000 feet of the ground. This is a bit excessive for most personal aviation. Instead, consider what I call an Altitude Critical Area (ACA). An ACA exists within 1000 feet of the surface; within 1000 feet below a level-off altitude when climbing and 1000 feet above when descending; and from intercepting a segment of an instrument approach until safely on the ground. The careful pilot wont call Unicom to arrange a quick-turn or explain the airplanes flap operation to passengers while operating in an ACA.

How often have you read of an airplane that cant achieve climb when taking off from high density altitude airports, running off the far end of the runway? Monitoring the airplanes performance and ensuring youre getting what you expect is another characteristic of the careful pilot. Have you ever forgotten to raise the gear or flaps after takeoff, only to feel puzzled about the resulting performance? Knowing beforehand what performance to expect from combinations of power, gear and flap configuration helps the careful pilot avoid catastrophe.

Similarly, many mishaps can be avoided by knowing what fuel burn to expect from a selected power setting and mixture technique, and actively cross-checking during flight. Modern GPS receivers interfaced with fuel computers calculate this precisely, but remember the garbage in/garbage out aspect of computer technology that cant account for fuel leaks and improperly input initial fuel loads.

Just as desired performance results from engine and fuel management, the careful pilot learns what indications are normal for a given engine, records any abnormalities, and takes the airplane and data to a mechanic before unusual indications turn into engine failure. In flight, he/she will proactively use techniques to arrive at predicted engine performance, and change techniques at the first sign of other-than-expected results-with reactions as simple as adjusting the mixture or cowl flaps a hair to as drastic as a power reduction and a precautionary landing…again, before it becomes an engine-out emergency.

Of course, a major factor in flight safety is weather, yet less than half of all pilots involved in a weather-related crash obtained a weather briefing. In anything but the most benign weather conditions the careful pilot will check weather at the first sign of visual change or deviation from the forecasts, and once per flight hour regardless of any identified change.The careful and conscientious pilot gives Flight Watch or Flight Service a pilot report describing departure conditions and once during every in-flight weather check as the cost of doing business with the weather experts, and to provide an improved weather picture for other pilots planning or conducting flights in the area.

Approach And Landing
On approach and landing, speeds are decreasing and the flight path is converging with the ground. The margin for error decreases as the maneuver progresses. While youre flying straight and level, i.e., before beginning the approach, is a good time to get things set up. Get all navigation equipment configured before intercepting a published segment of the approach.Use a cockpit flow pattern to ensure you have everything configured for the approach. If you find yourself playing catch-up when entering the ACA, ask for a delaying vector or other action to keep from continuing inbound before you are ready.

Thoroughly review the approach procedure, including the miss, well before the ACA. Once inbound from the FAF, however, there are really only three pieces of information you need to safely fly the approach.

The first is altitude: Know any stepdowns inside the FAF, and the DH or MDA.

Finally, and given the very high rate of gear-up landings, the careful pilot of a retractable-gear airplane will always confirm gear position immediately after extension and on short final, and be prepared to miss the approach or go around if the gear does not indicate down-and-locked.

Post-Flight
Finally, the careful pilot knows the flight is not complete even at engine shutdown. He/she takes time for a short aircraft postflight inspection, catching any discrepancies when they can be addressed before the next preflight, when they might be overlooked or outside pressures tempt the pilot to fly despite the problem. The careful pilot also views every flight as a learning experience, and so takes time to reflect in a personal critique of his/her performance, knowing theres always something that could be done better next time.

The best definition of a careful pilot might be someone who understands his/her personal limitations and those of the aircraft, and then plans and conducts each flight within those limits. When it appears the flight cannot continue within those limits, the careful pilot takes immediate and proper action to return to a safe flight envelope or to land.

Also With This Article
“Thorough Inspections?”
“A Code To Live By”
“The Rule Of 10s”