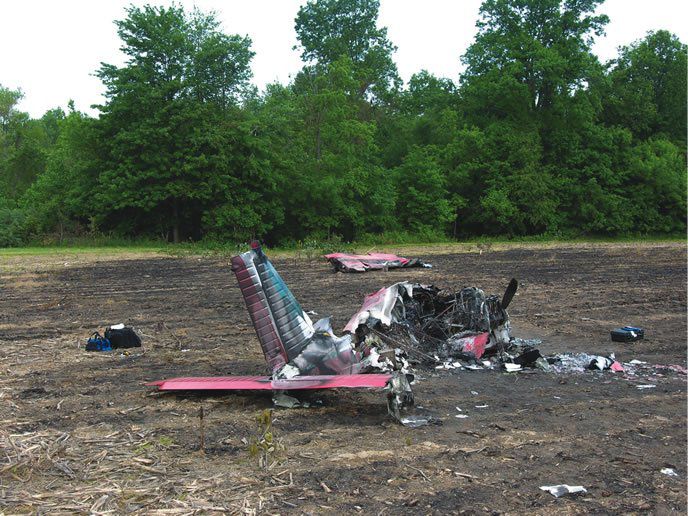 It’s tragic that so many public figures have perished in general aviation accidents. The death of a celebrity in a general aviation aircraft almost always leaves a strong negative impact on the industry’s image, probably creating additional downstream challenges ranging from local airport restrictions to reduced student pilot starts. Traditional media rarely is helpful and the ignorance of mainstream journalism causes additional harm.

Musicians often seem to have suffered the most in general aviation accidents. If there is such a thing, the “poster child” GA accident in which musicians died is the Buddy Holly crash, sometimes referred to as “the day the music died” and popularized in the early 1970s by Don McLean and his tune, “American Pie.” In addition to Holly, Richie Valens and J.P. “The Big Bopper” Richardson died, along with their pilot, Roger Peterson. The accident killing these three celebrities and their pilot was one in a long string of such crashes, occurring both before and after it. And like so many other GA accidents, the Buddy Holly crash also has lessons for us, especially in how we should think about and manage risk.

Early on the morning of February 3, 1959, a 1947 Beech Bonanza took off from the Mason City (Iowa) Municipal Airport (KMCW) with Holly, Valens, Richardson and Peterson aboard. According to the accident report, “The aircraft was observed to take off toward the south in a normal manner, turn and climb to an estimated altitude of 800 feet, and then head in a northwesterly direction. When approximately five miles had been traversed, the tail light of the aircraft was seen to descend gradually until it disappeared from sight.” The wreckage was found the next morning.

The crash was investigated by the Civil Aeronautics Board (CAB), the federal agency responsible for crash investigation at the time, plus economic regulation of commercial aviation. (The National Transportation Safety Board, NSTB, wasn’t created until 1967.) According to the resulting CAB report, there was no evidence of in-flight structural failure or engine malfunction. The CAB determined the aircraft impacted the ground in a high-speed descent while in a steep right bank and nose-low attitude. The aircraft was demolished and the impact was not survivable.

The CAB’s final report is surprisingly thorough. It found the accident’s probable cause was “…the pilot’s unwise decision to embark on a flight which would necessitate flying solely by instruments when he was not properly certificated or qualified to do so. Contributing factors were serious deficiencies in the weather briefing, and the pilot’s unfamiliarity with the instrument which determines the attitude of the aircraft.” Today, this accident likely would be categorized as resulting from a loss of control. In that way, it’s a typical general aviation accident and appears to be an open-and-shut case. (The NTSB recently declined a formal request to re-open the investigation.) But it’s clear there were other factors involved.

In our May issue (“Out of Control?”), I wrote that perhaps four out of five loss-of-control accidents actually have poor risk management as a root cause. This accident is no different, and we need to look closely at the facts to determine if the pilot identified, assessed and mitigated the hazards he faced. The best way to do this is to analyze the accident using the familiar PAVE acronym. For first time readers, that’s Pilot, Aircraft, EnVironment and External Pressures.

The accident report discussed the pilot’s background, motivations, qualifications and ability to undertake the accident flight. The report characterized him as a “young married man who built his life around flying.” He had been flying a little over four years and had accumulated 711 hours, including 128 in the Bonanza. Almost all of the Bonanza time was accumulated during charter flights. He did not hold an instrument rating on his commercial pilot certificate, although he had passed the written examination and had accumulated 52 hours of dual instrument instruction. He also held a flight instructor certificate. All in all, he seemed like a typical pilot eager to build time, much like most of his future contemporaries today.

The Beech Bonanza involved in the accident flight was manufactured in October 1947. It was an original model “straight” 35 was built during the type’s first year of production. It was very well equipped for its day, with multiple radios and a “full panel.” According to the CAB, the airplane was properly maintained. Significantly, although it had an autopilot, it was recently installed and not operable for the accident flight. Also, as mentioned in the sidebar at left, its attitude indicator likely was unfamiliar to the pilot.

Although weight and balance issues were not mentioned in the accident report, all V-tail Bonanzas have a relatively narrow center of gravity range. It’s quite possible the accident aircraft was near, at, or even beyond the rearmost CG limit when it departed, with three adult male passengers and their baggage.

In summary, the aircraft was airworthy, but its equipment—attitude indicator and inoperative autopilot—were risk factors, as was potentially its weight and balance state. In addition, the lack of deicing equipment may have been a risk factor, as we will see.

Peterson faced several environmental risks. An early forecast he obtained predicted light snow showers; a later forecast predicted cold-front passage at Fargo, N.D., the planned destination, before the ETA. The forecast also spoke of freezing temperatures from the ground up, abundant moisture at all levels through 12,000 feet, and moderate-to-heavy icing in the clouds. These conditions were forecast to continue through the night. There was some indication that the briefer did not discuss these advisories with Peterson during the first briefing.

Of more immediate importance, light snow began at Mason City, falling out of the 5000-foot overcast before takeoff. While the aircraft was taxiing for departure, the combined flight service station and control tower at Mason City informed Peterson that the ceiling was now 3000 feet, sky obscured, visibility six miles in light snow. Winds were 20 knots, gusting to 30.

It’s easy to understand Peterson’s eagerness to undertake this flight: He wanted to please his boss and his passengers. Like many 21-year-olds, he probably felt invulnerable, was confident in his abilities, and eager to continue building time and experience toward a planned flying career. The chance to spend quality time with the three musicians—and display his skills as a pilot—may also have crossed his mind. These external pressures must have been considerable, especially given the weather.

If you’re planning a personal sightseeing or “$100 hamburger” flight, it’s easy to simply cancel it if the conditions are adverse. Forcing your passengers to suffer through turbulence or worse—and perhaps come away with an unfavorable opinion of your piloting abilities—isn’t a good choice when you should cancel and reschedule for another day. Yet, it’s amazing how many pilots continue anyway in such situations, with frequently tragic results.

Transportation flights are another matter. The objective is to get somewhere on a schedule, and pilots are susceptible to the elevated external pressures of achieving that goal. In this accident, the pressure was further increased because it was a charter flight with famous passengers—they were paying for the privilege—and they had to get to Fargo for their next performance.

It may be that external pressures are the most insidious of all the risks Peterson faced. It would have taken tremendous courage and willpower for him to tell his boss and his passengers that a departure wasn’t safe. Yet, this situation occurs all too often in aviation and many pilots cannot summon the will power to refuse such a flight.

What would you do?

As you consider the situation Peterson faced, you may say the risks he faced were so obvious that it would never happen to you. Indeed, you may already be “risk-management proficient” and reach this conclusion with ease. Nevertheless, keep the following points in mind when you begin your planning for any flight.

For a local or “$100 hamburger” flight, remember that canceling is relatively easy. Your passengers will understand and will even be grateful if you cancel a flight where the risks are too high.

For a transportation flight, remember that the risk management process begins well before it, sometimes days before. Depending on the urgency of the event you’re trying to get to, it might be better to arrange alternate transportation.

For any flight, even a simple one, beware of subtle or insidious risks, and make sure you mitigate all of them to lower, acceptable levels of likelihood and/or severity.

Robert Wright is a former FAA executive and President of Wright Aviation Solutions LLC. He also is a 9600-hour ATP with four jet type ratings and a flight instructor. His opinions in this article do not necessarily represent those of clients or other organizations he represents.