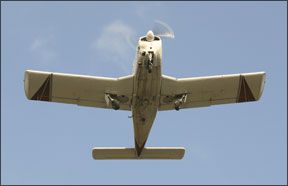 Go-arounds (sometimes called rejected landings) are something of a “forgotten maneuver” for most pilots. I think this is because the go-around is something were taught as a way to fly away from a botched landing. As we gain more experience and get better at landing, we find ourselves needing this escape route less frequently. The psychology of pilots is such that we try to “recover” from our mistakes, so we also tend to try to turn bad landings into good ones with a nudge of the throttle, a tap on the rudder pedal, or a twist of the controls instead of powering up and climbing away for another try.

Instructors can fall into the same trap. Failing to see a reason for a go-around in

their experienced students landings, they might not require demonstration of a go-around during a flight review or other recurrent training. If the pilot receiving instruction is instrument-rated, the CFI may consider flying a missed approach to be adequate to demonstrate go-around technique. I must admit for a time I was in that camp as well.

When was the last time you practiced a go-around? With experience, ego and unenlightened instruction, it may have been a very long time. So what happens on the day something completely outside the span of your expert aircraft control requires you to call off the landing from a point very near (or even on) the ground?

The goal of the first 60 seconds of a go-around, of course, is to turn a downward trend toward or onto the runway into an upward climb that clears any obstacles on the far end. There are several elements to going around, summarized by control of power, pitch, configuration and alignment. To consider what you must do with each, visualize your airplane in an obstacle-clearance climb. What will each factor look like?

Power will be full, unless temperature- or torque-limited in a turbine airplane, in which case power will be the maximum limits allow. In piston airplanes, power includes mixture, propeller (if the airplane has a manually controllable prop), carburetor heat (if equipped) and throttle. It can also include a manual turbocharger wastegate, cowl flaps and other airframe-specific considerations.

I like to get the mixture full rich or as applicable for the altitude before final approach, so theres one less (very critical) thing to do if I have to go around. If you prefer to leave the mixture at some leaner setting, or even in its cruise position (which may be well lean of max-power settings), youll need to advance power for go-around by first enrichening the mixture. Only by leading your power advance with mixture will you have power when you advance the throttle. If you land with the mixture lean of peak EGT, your engine may quit entirely if your lack of recency in the go-around maneuver causes you to push the throttle forward first-advancing throttle from a lean-of-peak setting has been implicated in several accidents.

In many airplanes, you can extend a thumb to push in the carb heat control when adding throttle. If your airplane does not permit that, advance the throttle to get most of the available power, then turn off the carburetor heat for the rest.

Pitch toward the attitude that results in VX speed for your airplane. Note that the VX attitude changes with airplane weight and with flap position. Not all Pilot Operating Handbooks (POHs) provide guidance for these adjustments. There may be some hints, however. Look at the takeoff performance chart. It may list different obstacle-clearing target airspeeds for varying weights. Since POH performance charts are generally written to highlight the best possible airplane performance, the takeoff chart usually describes a short-field takeoff technique (even if the chart doesnt say so). As weight goes down, the speed netting best angle of climb goes down as well, which is why takeoff charts sometimes provide speed adjustments for different weights. If you need to go around, aim for the speed appropriate for your airplanes current weight.

Similarly, VX goes down with flap extension, even if the book doesnt say so. Does your POH have performance data for takeoff with partial flaps extended? If it does, and if the data include target airspeeds, those are the speeds to aim for in a partial-flap go-around.

(The FAA Practical Test Standards call for climbing out of a rejected landing at VY airspeed. If youre not facing an obstacle you may certainly aim for this slightly faster speed, adjusting your pitch attitude as appropriate. Most POHs do not provide any guidance as to VY speed changes with varying weight or configuration).

What pitch attitude results in these speeds? In most light planes itll be somewhere in the 10-to-15-degree nose-up range. How can you tell? Go up on a clear day and practice in zero- and partial-flap configurations. Look at your vertical speed and adjust pitch (and airspeed) until you get the best climb. Estimate your airplanes weight and record the indicated airspeed and attitude; fly the pitch long enough to see what it looks like using visual references over the nose and down the wings. Do this at an altitude safe for practicing stalls, and clear for other traffic before your experiments, because if you are overly aggressive you may stall the airplane. Take along a CFI or knowledgeable safety pilot for increased safety.

In some airplanes the landing trim position may be much more nose-up than the takeoff position (which itself is really a climb trim setting at full power). Be ready to push forward to keep the nose from coming up excessively when you add power. (See the sidebar, “Trimmed Stalls,” on page 7.)

Configuration describes the position of wing flaps and (if retractable) landing gear, as well as other items like cowl flaps and trim. After establishing power and pitch targets, begin reducing drag. If your flaps are further down than the first (or approach) notch, move the flap control to the first notch/approach position. (See the sidebar, “Drag Demo,” on the next page.) Re-trim as necessary for the VX attitude.

You dont need to do anything more with configuration immediately. Think about it-your airplane will climb nicely with partial flaps and retractable landing gear down; you may take off like that all the time. Sure, youll clean the airframe up the rest of the way soon enough, and even open the cowl flaps (if equipped) for engine cooling, but these actions can-and should-wait until you are well established in your go-around climb.

Alignment with the departure path requires maintaining crosswind correction. Additionally, a propeller airplanes turning tendencies will be at its greatest when you go to full power at a slow speed and a high angle of attack. Give it the rudder it needs to compensate for propeller torque, slipstream effects, and other turning tendencies to stay aligned with a safe path down the runway and past the departure end.

My first instructors drilled into me that I should verify I was properly climbing in a go-around, so Id be over the pavement if the wheels momentarily touched before I began climbing. Once certain I was going “up,” I was to sidestep to the right side of the runway as I climbed away. This gives visibility out the left (pilots) side to see whatever was on the runway (assuming it was a runway issue that prompted the go-around), provides a chance to verify the runway is clear for a second attempt, and permits keeping any departing airplane in sight if it was climbing away from the runway beneath me.

I almost never see this side-step technique on the rare day I watch an airplane go around, although the FAA Practical Test Standards from sport and recreational pilot through commercial pilot (but curiously, not for the ATP) all require the pilot to “maneuver to the side of the runway/landing area to clear and avoid conflicting traffic” in the go-around/rejected landing. Maybe we should re-emphasize the wisdom of the go-around side-step, which does seem to offer some key benefits at a time when youre liable to need them.

Studies by the Flight Safety Foundation have cited a physiological hazard known as the “false climb” illusion. More scientifically labeled “Somatogravic Illusion,” it describes the result of fluid moving in a pilots inner ear when an aircraft accelerates. We sense this motion as a pitching movement upward-a “false climb.” If we cant see outside the airplane (during a night go-around, or climbing directly into blinding sunlight), this can cause us to want to push forward on the yoke to “recover” from the false climb.

The FSF report considers somatogravic illusion a contributor to accidents when a corporate jet rejects a landing in poor visibility. Add power to a light jet and the aircraft will accelerate swiftly. It takes discipline and a good instrument scan to maintain the proper pitch attitude for climbout; distraction or undisciplined flying may prompt the pilot to fly the jet into the ground.

What about the vast majority of us who do not fly jets? Is somatogravic illusion a consideration? Without the huge reserve of power enjoyed by jet pilots, propeller airplanes will not accelerate as rapidly with power application at the go-around point. Instead, its more likely the airspeed will decrease as we turn descent into a climb. Fluid in our ears will slosh the other way, creating a “false descent” illusion. If we cant see a horizon we may be tempted to pull up on the controls to correct for this “descent” close to the ground. The fix: No matter what youre flying, integrate the attitude indicator into your pitch reference scan if going around at night, or any time forward visibility is limited.

These are your goals in the first 60 seconds of a go-around. Smoothly meet these goals before adding additional workload, like communicating, planning to re-enter the pattern or following the missed approach procedure. Once established in climb, with some air under you and airspeed on the dial, youll have time to re-enter the pattern or decide whether going somewhere else is a better plan.

We dont seem to practice go-arounds as much as we should. Include rejected landing practice in your day-to-day flying-and that of your students-along with all recurrent flight training.