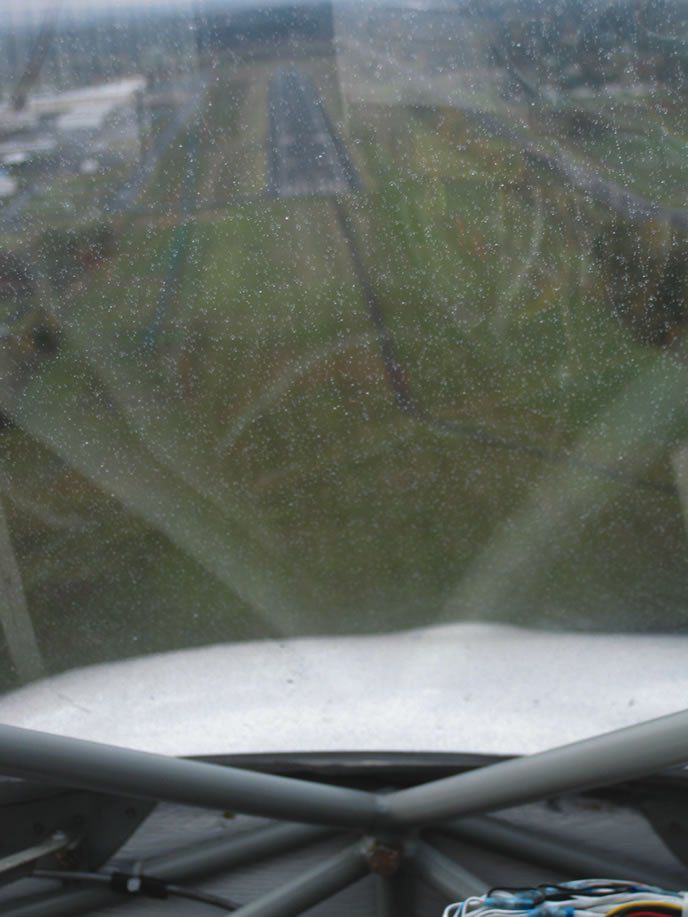 In many conversations with instrument instructors, I’ve noted a common concern about the way many pilots conclude practice precision approaches (ILS or GPS LPV) under the “hood”: They do a great job of keeping the needles near the center as decision altitude nears; airspeed, descent rate and heading all would be appropriate. But when the hood came off at DA and the pilot spotted the runway, it was Katie bar the door. What happened next can be summarized as a whirlwind of activity in the left seat as the power was yanked back, flap deflection increased and a dive for the runway threshold commenced. It was as if there were some sort of prize for landing short.

None of this made sense to the CFIs. The airplane had been nicely established on the localizer and glideslope and—just because the pilot thought he or she could see the runway—it was suddenly time to make all sorts of speed and configuration changes, despite not yet reaching the approach lights, with plenty of runway ahead.

Dive For the Runway?

This “diving-for-the-runway” practice is a concern because, being human, pilots who practice doing things one way will do them that way in the future, even when it’s not appropriate. If there any ice, fog or low, scattered clouds is present on a for-real precision approach for real, the habit of making significant configuration changes before getting to the runway threshold on an ILS or LPV could be the last bad habit a pilot practices.

The NTSB’s files include many reports of crashes after a precision approach, and many examples of pilots who had been flying an ILS in poor weather, broke out, spotted the runway or the approach lights ahead and crashed short of the runway or touched down on a parallel taxiway. In interviews with pilots who survived, some said they were convinced they had a good view of the runway after shifting from instrument references to visual references, even in seriously restricted visibility, very low ceilings and/or scattered clouds below the airplane. The pilots then proceeded to disregard the very instruments providing excellent guidance to the runway, and made a power and/or configuration change prior to reaching it.

In considering the last portion of a precision approach—one that we can fly down to 200 feet and a half-mile visibility, an ILS or LPV—let’s think about what’s going on and why we’re flying such an approach in the first place. Unless we are just practicing, we’re doing it because there is some question of getting to the runway safely, usually because of foul weather. Unfortunately, we have spent hours and hours doing practice ILS approaches on good weather days, so when we looked up, we saw a nice, clean, dry runway, shimmering in the sunlight. It may be the last flight of the day, and we want to make the first turnoff. We’ve seen that sight picture hundreds of times before. When we see a runway we know what to do: Slow to 1.3 VSO in the landing configuration and land just past the threshold. It’s ingrained. We completely disregard the aiming point markers on the runway and abandon the equipment that’s gotten us to this point. We land just past the numbers, congratulating ourselves on a well-flown ILS. The only problem is that when you most need the experience of landing out of an ILS/LPV in scuzzy weather, you won’t have it. And because we practice diving for the runway again and again, odds are we’ll do it that way when the weather is down around our shoelaces.

When we shoot an ILS or LPV for real, that first view of the runway presents a much different picture than we have seen in our carefree, VFR practice days. Rain is hammering against the windshield, or ice has reduced vision to a small hole above the defroster. We pick out the approach lights. There is no horizon. The last thing we need to do is change what we’ve been doing to get here successfully. But, what is our habit pattern? Dive for the end of the runway. We are going to make radical changes to that airplane before we’re even over the approach lights, while we have lousy visibility and visual references. Even if we have shot many actual weather ILS approaches, our total time in that type of visual environment is measured in seconds or a few minutes. The transition to visual references is easy to do when the weather is good, but can be horribly difficult when visibility is down to a few thousand feet.

What happens next? There isn’t enough visibility for us to control the airplane as we head for the runway and we hit the ground. Or, we fly into those scattered clouds that formed due to the rain cooling the air near at 150 feet agl while we don’t have the airplane collected and we have to try to transition back to the gauges and make a go around. Can we do it?

For an air carrier, getting below the glideslope (a “fly-up” indication) is a violation of the FARs. Those folks are required to stay on or above the glideslope all the way down to the flare. That’s part of the reason those fixed distance markers are on ILS runways; if you shoot the ILS or LPV correctly, they are approximately where you will flare.

The diagram in the sidebar above highlights FAA-standard runway markings, with several takeaways. One is that the touchdown zone begins 500 feet past the threshold, not on the numbers, and the aiming point is another 500, for 1000 feet of runway behind you. No, neither the touchdown zone or aiming point are not right at the threshold. Since there are no FAA-approved ILS or LPV approaches with 200/-mile minimums to runways less than 4200 feet long. Plus, and I’ve checked, there are no prizes for landing short after an ILS.

Have you looked at your charts lately? They show a threshold crossing height, that is, how high you will be over the end of the runway if you are on the glideslope. It’s ordinarily about 51 feet. In a Cessna 172 or Piper Warrior, were you to be slowed to 1.3 VSO at the threshold, 51 feet up, and then land per the book, you’d stop about 2000 feet beyond the threshold. That leaves at least 2200 feet unused on the shortest of ILS runways (and it’s one of the reasons 50-foot obstacles are so popular in airplane performance charts).

As a result, when you break out, why not at least wait, keeping everything as it is, until well over the approach lights—or even until crossing the threshold—before reducing power and tossing out the flaps? Waiting, being a little patient, before slowing or reconfiguring the airplane, eliminates the nasty risk of crashing short of the runway. I’ve heard pilots express worry that they will run off the far end of the runway if they delayed decelerating to landing speed until over the threshold. According to the accident reports, that risk is substantially less than crashing short of the runway—and it’s a lot less damaging to hit the far fence at 20 knots than the ground at 70 or 80.

In general aviation piston pounders, even in the highest performance twins, getting down and stopped on an ILS runway from a 50-foot threshold crossing height is simply not a problem. After all, the jets do it daily and they’re going a lot faster than us bugsmashers, and they don’t touch down until at or after those aiming marks on the runway 100 feet beyond the threshold. The greater risk we face is crashing short of the runway or losing control in ice, so I respectfully suggest that we need to amend our habit patterns and learn to wait a bit, to leave things as they are after breaking out of the clouds and keep flying that ILS until we cross the runway threshold; to not get excited on those nice practice days and dive under the glideslope when we spot the runway.

It works in lousy weather because we have created a habit pattern in good weather. We break out, observe and wait, because nothing is broken, so nothing needs to be done right away. We just fly visually at the power setting and speed that has been working just fine, while cross checking the needles.

Maybe we should put a great big placard on the panel that simply says, “WAIT.” We have plenty of time after we spot the runway to decide when and where we are going to slow the airplane for landing. And, no, we won’t run off the end. We’ll turn off about midfield and can pat ourselves on the back for flying an ILS for real and not doing anything dumb in the process.

Rick Durden holds an ATP and is a CFII. He is author of The Thinking Pilot’s Flight Manual or, How to Survive Flying Little Airplanes and Have a Ball Doing It, Vol. I.