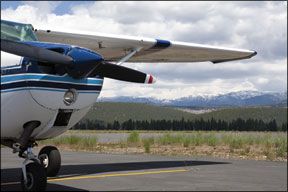 Mountain flying is one of the more challenging but rewarding types of aviation available to most pilots. The scenery is magnificent, landing on remote strips affords access to some of the least-trammeled locations on Earth and its rare to find much of a crowd. Whole books-and careers-have been based on the skills and knowledge needed to fly mountainous terrain safely.

Indeed, the hazards of mountain flying in personal aircraft go

far beyond what is normally taught to “flatlander” pilots in ground school. Most mountain flying caveats dwell on the vagaries of leeward hazards such as downdrafts, waves, rotors and resulting turbulence. The effects of temperature and altitude on aircraft performance also are part of this equation, as is the reduced power available when a normally aspirated engine is taken up to around 10,000 feet msl and the pilot forgets proper leaning. This is not one of those articles.

Instead, we want to focus on one specific and often-overlooked aspect of mountain flying: the possible hazards of flying to the windward side of a ridge or mountain pass. Put simply, windward hazards usually go unmentioned in mountain-flying discussions, yet they have their roots in the fundamentals of fixed-wing aerodynamics.

At the outset, lets state something perhaps not immediately obvious: The works and names of Daniel Bernoulli and Giovanni Venturi should be associated with mountain flying. Bernoulli and Venturi have been familiar names in aviation for over a century now. They are primarily associated with the airfoil, lift and instrumentation. Bernoulli and his theories should need no introduction: An increase in the speed of a fluid (air, in this case) occurs simultaneously with a decrease in pressure. Air flowing over an airfoil experiences this decrease in pressure.

Meanwhile, older airplanes-specifically those without vacuum pumps-may have a small venturi tube mounted on the fuselage in the air stream to power at least one vacuum-driven instrument gyro. The narrow section of this hour-glass-shaped device has a port through which air is sucked from the cockpit instrument case out through the venturi via a small vacuum line. The instruments case is designed to draw air across it and spin the gyro. The sidebar above explains a venturi tubes basic math.

So thats the theory behind a venturi tube; whats the practical application in a mountain pass, or over a ridgeline? Its the same basic principle, just on a larger scale: As the wind-driven air mass is accelerated over the ridgeline or through the mountain pass, its velocity increases at the geographic features midpoint, with a proportional reduction in air pressure. Once past that midpoint, the air slows again as it exits the narrowed area. The air mass expands.

As should be evident from the formula in the sidebar above, the higher the increase in wind speed, the greater the pressure drop-and resulting air density decrease.

This pressure decrease consequently produces a false high altimeter indication error, leaving the airplane at a lower altitude than indicated. Its the same effect as flying from a high-pressure system to lower pressure. In addition to altimeter error, with a strong wind at the midpoint of the pass or over the ridge line, the air density could potentially be reduced enough to deny the already marginally powered airplane adequate manifold pressure (power) with which to maintain level flight. The venturi effect on power loss, however marginal, can be the last straw.

This hazardous condition, produced by the combination of power loss and altimeter error is amplified considerably when visibility is reduced. The wind velocity increase through the pass or over the ridge line can be as much as three to one. The barometric pressure drop when encountering the venturi effect in a mountainous area can be as much as one inch in extreme cases, leading to a dangerous altimeter error of as much as a thousand feet, and critical manifold pressure loss of one inch.

Altimeter settings provided to pilots in mountainous areas are not necessarily valid for the area where the plane is actually flying, although most pilots assume they are. These readings are point samples, taken from nearby airports and remote weather stations. They are not valid area-wide values.

In fact, there is no en route procedure for calculating the actual altimeter setting at the pilots immediate position other than some improvised calculation from GPS data, comparing the altimeter with the GPS altitude. Even the GPS altitude itself is usually not an exact altitude reference.

Approaching a mountain ridge or pass with a tailwind can provide a much shallower climb angle than the pilot anticipates. This is due mostly to a progressively increasing tailwind as the feature is approached. Also, power is lost due to increasing absolute and pressure altitudes and the climb angle becomes shallower and shallower as the airplane approaches the ridge line or narrow point in the pass.

Poor choice of a lateral approach angle, such as 90 degrees to the windward ridgeline, can result in no viable abort option as the distance to the ridge line decreases, tree tops come closer, and a turn away becomes impossible. In a narrow mountain pass, there may simply be no direction to turn at all. The addition of any turbulence can also distort the pilots sight picture, resulting in adversely affected situational judgment. Remember, the first 90 degrees of the abort turn is still continuing uphill, and the necessary abort turn bank angle itself increases the stall speed considerably. “Unloading” the wing for the turn is not possible while still going uphill.

A Super Decathlon, similar to the one flown by Steve Fossett on his last flight, has a stall speed of 53 mph and best angle of climb (Vx) speed at sea level of 58 mph. The best angle of climb speed should actually be increased by one mph per 1500 feet of altitude-an unlikely correction from a practical standpoint by a pilot already in trouble. In Fossetts situation, considering density altitude, this would be about an eight mph increase-to 66 mph. A 45-degree bank angle, still going uphill for the next 90 degrees of turn and unable to be “unloaded” because of tree-top altitude, would increase the stall speed by a factor of 1.2, to 63.6 mph, 10 mph higher than the sea level speed. A 60-degree bank angle would increase sea-level stall speed to 75 mph.

Just when the pilot has decided he can barely make it through the pass, or over the ridge line, and commits, he enters the region most affected by the venturi effect and loses that little bit of marginal horsepower that otherwise would have allowed him to clear the high point. He also enters the area of highest tailwind, shallowest climb angle and greatest altimeter error. How often do we hear of an airplane striking the mountain at an elevation just a few feet from what was needed? We wonder, “Why does it always happen that way?”

This “new” windward (tailwind) situation has an additional issue to be considered: impact energy. Since kinetic energy is a function of velocity squared, an airplane stalling at 60 mph but with a 30 mph tailwind hits the ground with nine times the energy of the same airplane with a 30 mph headwind. The ground speed in the tailwind case is 90 mph, and in the headwind case is 30 mph. The physical damage incurred in a downwind crash is apt to be much greater than one would intuitively expect. The downwind crash is considerably less survivable. In Fossetts case, a considerable tailwind was reported by campers in the area, and the resulting debris field reflected a very high impact speed.

Most mountain flying indoctrination discusses thoroughly the leeward approach hazards, but windward hazards and tailwind situations are seldom if ever discussed. Theres a lot going on when approaching the geographic feature from windward, including engine power loss, which works in a different and insidious way, and affects the airplane equally, regardless of direction traveling after arrival in the pass or over the ridge line. This is especially important as the most often chosen path through a mountain range by the pilot of a marginally powered aircraft is navigation through a mountain pass, or low point in a ridge line.

Lets be careful out there.