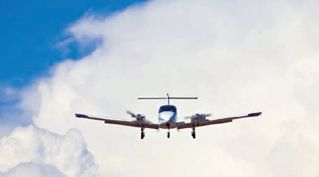 Thunderstorms are a perennial topic whenever pilots get together to discuss weather, especially in summertime. Often, the conversation drifts from detection and avoidance to penetration and how to keep the shiny side up once we’re inside one. War stories inevitably are told, always followed by some version of the “don’t try this at home” admonition.

Yes, learning a few tricks to help get you out of a thunderstorm with all the big parts attached is good. Even more beneficial, though, is learning how to avoid flying into one in the first place. And it’s not hard: Just say “no.” To achieve that goal, we usually have a few tools at our disposal, including an sferics device (Stormscope, Strikefinder), data-linked Nexrad weather radar (whether by satellite or ADS-B In) or even airborne radar. Each of these tools has a downside, though, and none of them can replace the Mk. 1, Mod. 1 eyeball with which you were born. Here’s why.

No pilot who’s staying on top of the weather situation while airborne or even before, when planning a flight, should ever be surprised there are thunderstorms nearby. Even a cursory look at standard pre-flight planning information will highlight when and where the risk of thunderstorms exists. That’s reason one we should never stumble into one.

Reason two is that you really should have some kind of on-board detection equipment if you’re using a personal airplane for serious summertime transportation. Yes, you’ll haul it around with you during the other three seasons—when it’s so much dead weight—but when you need it, you need it. It should be right up there with a moving map GPS and an autopilot when it comes to equipping your flivver for safety and utility.

The good news is high-quality tools aren’t expensive: A portable GPS navigator capable of displaying Nexrad imagery can be had, new, for well under $1000. In addition to backing up your panel-mounted equipment and presuming you don’t have a built-in way to display Nexrad, it can be worth its weight in gold on a stormy day or night.

Reason three we never should stumble into a thunderstorm is we’ll remain VFR. Think about it: If we never fly into a cloud near where thunderstorms are forecast, we’ll never, ever, blunder into one. And that’s the main thing we want to communicate to you in this article.

Various references over the years admonish pilots to remain at least 20 miles from a thunderstorm. That’s because hail can be thrown that far out the top of a storm and ruin your day. It’s also because the winds and turbulence associated with a thunderstorm can exist well outside the cumulonimbus cloud itself. The 20-mile no-fly zone is great advice, but it can be impossible to know how close one is, especially at night or when flying in relatively smooth IMC.

How to avoid a thunderstorm? Our favorite way is to remain in VMC and watch from a distance as it goes by. In fact, we’ll deviate far and wide—especially at night—to remain in visual conditions. As long as we know where thunderstorms are, we can avoid them. The problem, of course, is obtaining and interpreting information on where the storms are so we can be sure to be somewhere else. As the NTSB notes in a recent safety alert directed at pilots who use in-cockpit Nexrad imagery, the “display depicts where the weather was, not where it is” (see the sidebar on the opposite page). That’s thanks, in part, to the way Nexrad works: It takes time—as much as 10 minutes—to scan nearby skies and even more time to process and assemble the obtained data into the moving images we want. Then and only then is it transmitted to your receiver by a third party, the overhead for which requires even more time.

That’s an important observation when it comes to using the tools we have available, especially since both airborne weather radar and sferics like a Stormscope or Strikefinder are real-time devices. It can come as something of a shock to pilots to discover their nifty new tool only provides near-real-time data. The sidebar at left explores these three generic products, including in-cockpit Nexrad, in greater detail, highlighting their drawbacks.

What’s a pilot to do?

Instead, we’d maintain they’re all strategic tools, designed not for us to penetrate a storm but to help us choose an alternate route around it. All three of these main tools provide long-range storm detection. When they’re available, they should be used to establish a storm’s position and relative movement and help us plan how we’ll get around them. When we’re an hour or so away from a storm, we really shouldn’t care where it is. Instead, we want to know where it’s going to be an hour later. In-cockpit Nexrad and its 20-30 minutes of imagery playback is incredibly useful to us for such a task.

Of course, a single thunderstorm, isolated against a blue sky, is easy to fly around. The real problem is when multiple storms form up in lines or clusters, whether they move or not. Whatever you do, don’t drive right up to a line of storms, thinking you’ll find a hole to drive through. It can happen, but we’ve seen impenetrable lines more times than we care to think about. In response, we’ve landed ahead of squall lines and parked for the night, we’ve delayed departures until the storm passes over us and we’ve gone way out of our way to make end runs.

And if you do feel the need to go tactical and fly between storms in a line or cluster, always remain VFR. You want to stay outside the clouds, where the vertical air columns are, but what you really want is to see what’s on the other side. If it’s verifiably clear all the way to the other side, we might risk it, knowing that tunnel can close up at any time. But the best choice is deviating.

Our maxim for deviating around thunderstorms is similar to voting in Chicago: Do it early and often. Use long-range settings on your weather avoidance gear to figure out where the storms are going to be when you get near them. Then be somewhere else.

Even if you’re not doing this in the IFR system, ATC can be incredibly useful. As a rule, ARTCCs and Tracons have a pretty good idea where the storms are and where they’re going to be. Same with Flight Service. Although ATC can be too busy keeping all the metal separated to provide individual assistance, if you listen to what other flights are doing, you’ll start to get a clear picture of storm and hole locations. Regardless, never let ATC vector you into an area you don’t like. The controller has no clue what your turbulence tolerance or ability to handle it is. And their weather information isn’t nearly as good as yours, if for no other reason than you have a front-row seat.

“There’s no reason to fly into a thunderstorm in peacetime.” So says the old urban legend of a sign over an operations desk at a U.S. Air Force base. We would just lop off the “in peacetime” qualifier and leave it at that.

As we noted at the top of this article, the best thunderstorm avoidance advice we can offer is to just say “no.” By giving storms a wide berth, you’ll always be around for the next hangar-flying session. You can regale the other pilots of how you had to fly a whopping 50 miles out of your way, but enjoyed clear skies and a smooth ride the whole time.