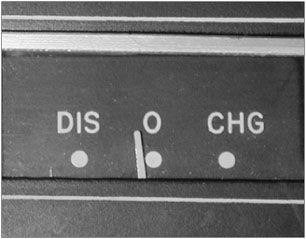 How we stay ahead of the airplane in an emergency situation is just as important as the steps we take to fix the problem. In many cases, that includes knowing what tools well have left well before the emergency occurs. One recent example involving an electrical system failure comes from NASAs Aviation Safety Reporting System.

The solo pilot of a Cessna 206 was cruising at 11,000 feet on an IFR flight when his instrument panel signaled an alternator failure. In VMC with over four hours of fuel aboard, losing the alternator was not an immediate threat, so the pilot calmly continued flying the airplane while dealing with the situation. Light icing conditions were reported beneath the heavy Cessna, and ceilings at or below 500 feet and/or visibilities of less than one mile extended for 100 miles in every direction. The pilot advised ATC and declared an emergency.

Unlike many, however, this pilot came to ATC not only with a problem, but with a plan of attack. After advising ATC of his flight conditions, he announced he would go off the frequency for 20 minutes to conserve battery power while maintaining his present heading and altitude. In the meantime, he asked ATC to look for reported surface visual conditions within the range of his four hours worth of fuel.

I set the cockpit up for no-electric, partial panel flight with (a) vacuum-driven attitude indicator, magnetic compass, wristwatch fastened to the control yoke, (and) two good flashlights, the pilot wrote later in his ASRS report. Then he shut off the Stationairs master switch, cruising above the clouds on a steady compass course. Twenty minutes later the pilot fired up his radio and learned that visual conditions existed at one airport, special VFR (SVFR) with a 4000-foot overcast at another. Both airports were served by radar-equipped approach control facilities. I elected to go to (the SVFR airport) and requested to remain at altitude, wrote the pilot, to plan a descent pattern that, if necessary, would ensure the suitability of the weather in the event of complete electrical failure and loss of communications. Center agreed and handed me off to Approach some 60 miles out. Approach was able to let me go off the air and conserve eight more minutes of battery power.

Twenty miles out, Approach gave the pilot a rapid descent, approving heading corrections to keep the pilot free of ice-laden clouds. The approach path was cleared of normal traffic, just in case the Cessnas battery gave out and communications failed. The pilot had only the most essential electrical equipment turned on, but ATC was painting a clear primary target for the Cessna. After switching to the tower frequency and receiving clearance to land, the touchdown was smooth and the pilot was just turning onto the taxiway when the battery gave out and all electrical power was lost.

Everything Right?
Unlike many aviation accident reports, which leave us to extrapolate information and find out what we should not do, this ASRS write-up illustrates how the pilot did a lot of things right to remain alive and unhurt. For example, our hero:

Had a plan. Its obvious the pilot had considered this eventuality before, perhaps in the comfort of his home. After the failure, he did not fly blindly on or declare an emergency and hope ATC would fill in the gaps for him. Instead, he advised controllers of the problem and then told ATC how he was going to deal with it.

Was equipped to handle the threat. Flashlights and a watch were in place. The pilot knew what powered which instruments. He did not have to grope around the cockpit to prepare for partial panel flight.

Conserved what he had. Again showing forethought, the pilot wisely conserved power at every opportunity. He shut everything down for 20 minutes until ready to descend and for another eight minutes before beginning his descent. When he powered up, he used only minimal equipment each time.

Calmly flew his plan, with the discipline to remain in VMC above the clouds until a VFR descent was possible. He planned the remainder of his flight, then he flew his plan-noting indications for later review, but flying the plane and saving troubleshooting for after he got on the ground.

Well, Almost
Theres no question that this pilot used good resource management to achieve a happy outcome. But, what more might he have done to improve his chances in the event of an electrical failure or other emergency? He should have:

Known at least the general direction of VFR weather without having to ask ATC. Although he used the valuable resource of ATC, if hed had an immediate communications failure, he would have had to find visual conditions by himself.

Turned toward improving weather before his 20-minute power-down to conserve electricity. If he had been able to turn directly toward VFR weather right away, or waited long enough for ATC to provide him the information before beginning his first conservation period, the pilot may have been on the ground even sooner.

Reconsidered the wisdom of overflying extensive areas of airframe ice and low IFR conditions. Almost any other major system failure may have mandated landing much sooner. Consider where the pilot would have been if a burned exhaust valve caused engine power loss or a fuel-system problem dramatically cut the airplanes range. Suddenly, he would have faced a descent into ice-laden clouds with a possibility that even a precision approach would not permit a normal landing. Just as the pilot had obviously thought about how hed attack an electrical failure before he was faced with it for real, he (and we) should plan trips with power loss or other critical events in mind.

The Cessnas pilot thankfully gave us a look inside an incident that did not go horribly wrong, showing us (for a change) an example of good decision-making that can prompt even deeper thought and action. He summed it up well: This report is respectfully submitted (to confirm that) resource management works and current training initiatives in [it] are paying off.

When Sparks Stop Flying
Since the introduction of dry vacuum pumps-which have finite working lives-partial panel training and evaluation has focused heavily on losing the pneumatic instruments as the most likely failure scenario. These instruments are usually the attitude indicator and the heading indicator. Total electrical failure presents a completely different partial panel scenario, one for which many of us do not train.

Say youre in cruise with the autopilot engaged when you lose an alternator or generator. If you dont turn off the master switch, you could drain the battery in short order. With what instruments does that leave you? Your turn coordinator or turn-and-bank instrument is dead (the slip/skid indicator, of course, still works). The expensive, electric standby attitude indicator is out to lunch. Your autopilot is also on vacation. If your heading indicator is electric (as are most HSIs), itll be flagged as well. An instantaneous vertical speed indicator becomes worthless. Depending on the vintage and model of your airplane, you may lose most of your engine indicating instruments. That colorful moving map will be dark and the ATC frequency will grow quiet at last.

Flying a twin? Remember that many twins have redundant electrical generators feeding through a single voltage regulator. Others feed a single electrical bus, or through a lone relay system. Any of these devices can fail, taking out both redundant systems. And dont forget that an in-flight electrical fire can force you to turn off two otherwise good alternators without warning or preparation. Ultimately, theres nothing like type-specific training and study to learn how single-point failures can take down even redundant systems.

Heed the Warnings
Unless youre literally asleep at the switch, youll have some warning that the electrical system is failing. Annunciator lights like Alternator, Alternator Out or Low Bus Voltage should illuminate. Ammeters will show a steady discharge; bus-voltage gauges will drop to battery-only levels and descend from there as the remaining power wanes. Dont presume youll have power until the bus voltage reads zero-the master battery relay in most 28-volt systems needs about 17 volts to remain closed; 14-volt systems require around nine volts, minimum. Your other indications will include fading radio strength and increasing static. High-draw items like GPS navigators and transponders may shut down before less power-hungry devices. Then, long before the battery is dead, you may hear a few loud clicks and see your remaining electrical equipment flash on and off as the relay tries to stay closed. Then the cockpit goes dark.

Making the Transition
Dont panic-you still have some things going for you. For example, if the autopilot trimmed the airplane properly before the electrons stopped flowing, its likely still trimmed. Some autopilots can pull or push slightly against the controls without retrimming, so it might give you the airplane slightly out of trim, with a pitch and/or bank excursion. Troubleshoot if you can, but concentrate on keeping the airplane under control. Like the pneumatics-failure partial panel scenarios you have practiced, make small control inputs.

Your pitot-static instruments are working just fine, unless youre in icing conditions without pitot heat or other anti-ice equipment. Importantly, your attitude indicator still works, unless youve gone to a full electric panel and your battery backups are depleted. If your heading indicator is air-driven, itll still work fine, but with an electric HSI, youre now committed to getting heading information from the magnetic compass or a handheld GPS.

Failure on Your Terms
Youll want to make the transition to no-electrics flight on your own terms. Get everything set, then turn off your battery to conserve power for landing. Know your airplanes systems and plan how youll respond to an electrical failure, and youll be ready to do everything right, too.