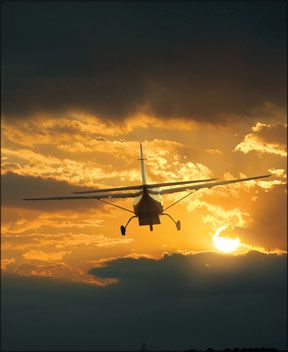 On a recent foggy morning in Hagerstown, Md., I sat waiting for the visibility to improve enough for me to depart on a Part 135 passenger flight. Every airport in the region was socked in with less than a quarter mile visibility, when a somewhat agitated passenger came up to me and asked what we were waiting for. I explained

that the visibility had to improve before we would be legal to depart.

In an incredibly ill-timed coincidence, we heard the sound of a single-engine piston departing from somewhere in the cloud outside the door, and my passenger snidely inquired why that plane could leave, but we couldnt. I felt like I had been asked to explain Bernoullis principle to a five-year-old. It was a deceptively complicated question, and one that should be of interest to pilots flying in their own aircraft under FAR Part 91.

While the thought of even opening the FARs can be enough to put most pilots to sleep, there are some occasional bits of knowledge to be found in surprising places. One such example is Part 135-a portion of the FARs most pilots have probably never looked at-which governs air carriers providing on-demand passenger or freight service in typical general aviation aircraft. Before the air carrier pilots out there question my sanity for recommending a leisurely reading of Part 135, Ill admit that it really is as boring and as dense as it looks.

Yet, Part 135 supplements rather than replaces the regulations of Part 91, with which all pilots are familiar. Because it is just more specific, Part 135 is more restrictive than Part 91 in some instances and more flexible in other instances. However, if a topic is not addressed under Part 135, the regulations found in Part 91 still apply. For the purposes of this article I will consider the OpSpecs issued for a standard non-jet on-demand IFR operation to be part of Part 135.

If you can get past the legalese in it, youll find that Part 135 contains a pretty good model for structuring IFR decision making when it comes to planning departures and arrivals. Considering Part 91 operations are flown by the group of pilots with the greatest range of proficiency, currency and experience with minimal regulatory restrictions, adding a little structure isnt necessarily a bad thing. While Part 135 will never legally apply to personal flights (nor would you want it to, trust me), the Part 91 pilot is given the interesting opportunity to take a buffet-style approach to how he or she operates by adding or omitting whichever limitations they want. Consider this just food for thought.

Operating under Part 135 requires a much more regimented approach to departure planning than many Part 91 pilots are accustomed to performing. The goal is to virtually guarantee successful completion of the flight before leaving the ground. One of the ways this is accomplished is by requiring the weather at the departure and destination airports to meet minimum standards. Leaving as little as possible to chance is one of the recurring themes in Part 135 flying.

The planning process begins by requiring the weather at your destination airport, at your ETA, be forecast to be above minimums. In addition, in order to depart IFR, the airport youre departing from is required to have at least one published approach procedure. If it doesnt, then you cant depart the airport IFR under Part 135 because the FAA hasnt performed an obstacle analysis of the surrounding area to guarantee obstruction clearance, or develop runway specific departure procedures.

If you want to take off in this case, itll need to be done VFR and only after youve closely examined a sectional to make sure youre not going to hit anything after departure. On the other hand, it is perfectly legal to depart such an airport IFR under Part 91 with the understanding that the pilot is completely on his or her own until reaching ATCs minimum vectoring altitude.

The next item to consider is the weather at the airport from which youre departing. To start off, open up your approach plates to see if there are any nonstandard, runway-specific takeoff minimums or departure procedures. Part 135 requires compliance with them, whereas they are not required to be complied with by a Part 91 pilot, although its an exceedingly good idea-the FAA didnt pull those numbers and procedures out of thin air. If you cant meet the weather minimums (visibility and ceiling) or a specified climb gradient for a particular runway, or if the runway is marked as not authorized, then you cant use it for an IFR departure under Part 135. When operating under Part 91, you should think really hard about using it.

If there are no applicable runway-specific limitations, the standard takeoff minimum under Part 135 for aircraft with one or two engines is one statute mile. However, as demonstrated by the above-mentioned aircraft, Part 91 allows departures without regard for the weather. But what if, shortly after departure, an in-flight situation requires an immediate return to the ground? If you take off below landing minimums, you might find yourself in a bit of a pickle. Again, Part 135 requires pilots to hedge their bets.

By far the most commonly applied departure guidance under Part 135 is the authorization for lower-than-standard takeoff minimums. This authorization is found in the OpSpecs for typical Part 135 IFR operations rather than the FARs, and requires only that the weather be at or above the lowest applicable approach minimums (considering only visibility). This codifies the common sense shared by many pilots of not taking off if you cant get back in.

In rare cases when standard takeoff minimums apply but the lowest approach minimums are higher than that, the pilot wont be able to get back in after takeoff and will need to file a takeoff alternate. This is an airport within one hour of flight time, which meets alternate minimums. In practice, these arent very different than

The requirements to land following an approach are the same for both Part 91 and Part 135: All you need is one of the standard visual references and the required flight visibility specified on the approach plate, meaning the visibility from the cockpit in flight. Thats a siren song that has gotten many pilots in trouble with the laws of physics and of the FAA, but thats all there is for Part 91. Want to shoot an approach when the weather is broadcasting lower than minimums? No problem-its perfectly legal.

Under Part 91, approach planning when the weather is low typically involves a lot of gut feelings and that slippery concept known as personal minimums. Part 135 adds a couple of layers on top of the basics, which go a long way toward ensuring that if an approach is attempted, it will most likely end in a landing.

That all sounds like common sense for the most part. Why would a pilot want to depart when the destination is forecast to be below minimums? Perhaps they have an incredibly good understanding of local weather systems, and think the weather service busted the official forecast. Likewise, why would a pilot want to start an approach when the field is reporting below minimums? Maybe the ASOS is installed in a depression thats subject to fog, while the rest of the area is clear and the pilot can clearly see the runway from altitude.

Regardless of the details, the Part 135 pilot couldnt make judgments like these because for them the applicable rules might as well be cast in stone. In practice, having legal restrictions such as these actually simplifies flight planning by removing the shades of gray oftentimes present in the decision-making process for Part 91 flights.

The examples discussed above demonstrate how Part 135 flight planning is characterized by (mostly intelligent) restrictions, whereas Part 91 flight planning is characterized by judgment. Granted, while Part 135 regulations occasionally result in situations which leave pilots scratching their heads, based on NTSB statistics, the accident rate for Part 91 operations is four times that of Part 135 operations, so they must be doing something right.

Taken for what it is, Part 135 contains a valuable framework for flight planning which should at least be considered by Part 91 pilots to give them some idea of “how the other half flies.” Pilots flying personally under Part 91 have the best of both worlds: They are given the freedom to make their own judgments of safety, and are able to institute any additional practices on top of a very minimal set of regulations.

Of course, freedom is a double-edged sword. To provide someone with the freedom to choose gives that person the freedom to make non-optimal choices, and thats how we learn. We can complain about the complexity of the regulations, and the restrictions that the man puts on our personal flying all we want, but the freedom given to Part 91 pilots is truly a beautiful thing. Use it wisely.

Lee Smith, an ATP and CFII living in Hagerstown, Md., has flown boxes and people under Part 135.