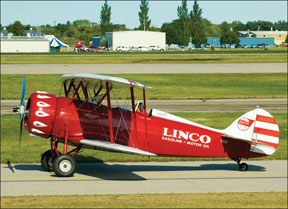 For many, taxiing an airplane can be an unnatural act. Theyve probably just climbed out of a vehicle steered by turning a wheel with their hands; now, theyre being asked to steer with their feet on a couple of pedals they probably cant even see. And many airport taxiways and ramps leave something to be desired when it comes to easy-to-see striping.

But there is much more to safe ground operations than just being able to steer or follow a yellow stripe to a runway. Each year, hapless pilots and their insurance companies discover this the hard way. Learning and implementing safe ground operations isnt rocket science, but it does require a mindset somewhat different from the one we use once were airborne. Lets look what happens during the various ground-operation phases and what we can do to prevent accidents when were in them.

Starting Up
The classic ground-operations accident occurs right after engine start, when a moments inattentiveness can be the most embarrassing. Or worse.

As weve discussed in past issues, hand-propping gets its share of entries in the probable cause column each year, as do flying chocks and other FOD on a ramp. But starting the airplane when its pointed at some other closeby object is asking for trouble. For instance, how do you know the airplanes brakes work? As the financial market disclaimers state, past performance is no indication of future returns; just because the brakes worked at the end of the last flight doesnt mean they will at the beginning of the next one.Use a judicious power setting to start the engine, also. Much of this can be trial and error, but weve yet to see an airplane throttle that required more than a half-inch of advancement to get the engine running.

Starting up at a high power setting-theres nothing that screams amateur louder-also has a tendency to blow around whatever is behind the airplane. If you left open your hangar door, you just dusted off its contents. If its not your hangar, but its open anyway, be prepared for a sharp rap on your window or a nastygram stuck under your cars windshield. Either way, youd deserve it.

Slow Down
Ultimately, we see the difficulty in transitioning from driving a car to taxiing an airplane as one of the greatest challenges to safe ground operations. Despite the obvious differences between autos and airplanes, cars simply respond better.

Look at the brakes on your car, and then look at your airplanes. Theyre a lot smaller, arent they? This means you simply cant stop as quickly when taxiing as you can when driving. How many times have you come to the end of a long taxiway and barely been able to stop before rolling off the runup pad into the weeds?

If youre thinking more about driving a car than about taxiing, youll probably be moving too fast. When it comes time to stop, the brakes simply wont be effective enough. Factor in a stiff wind, wet or icy pavement, cockpit distractions and that automobile mindset, and its a wonder we dont have more taxi accidents.

Take the example of this Cessna Skylane pilot. On November 3, 2005, the pilot was taxiing to his hangar after a local flight. He was making a right-hand turn when his left wing came into contact with a hangar. The airplane veered left, and the propeller struck the hangars outside wall. The pilot later told the NTSB that an excessive taxi speed and his poor judgment of the right-hand turn led to the accident. Duh.

Taxiing near buildings and other aircraft is a good time to slow down to a minimum speed. Use just enough power to keep moving and be ready to use the brakes immediately if theres something you dont like. On an open taxiway, say, toward the active runway, the wind is likely at your back. Think about it: Isnt that the definition of a tailwind? And doesnt a tailwind increase your speed? Slow down-you dont need so much power-because youll be screaming along by the time you get to the runup area and might not have enough room to stop if its crowded.

Use All The Pavement
About a month after the accident above, a Navion pilot collided with a vehicle while taxiing to a hangar in a non-movement area at the Whiteman Airport in Los Angeles, Calif. The pilot was following two other airplanes. He noticed the first airplane make a deviation, then the second made a lesser deviation; both deviations were to avoid a vehicle.

The pilot slowed his airplane, but was unable to determine his wing clearance because of glare off the vehicles windshield. The left wingtip struck the vehicle. The airport manager later commented that all three airplanes had about 300 feet of space to safely pass the vehicle, and the vehicle was as far to one side as possible.

Ramps, taxiways and runup pads can be very busy places. There are planes, people and fuel trucks, to name a few, as well as personal vehicles, luggage, chocks and the odd Sectional chart blowing across the pavement. Perhaps just as when you last shot an ILS to minimums, now is a good time to be on your game.

Remember to give other objects a wide berth-if it looks risky, it probably is. Shut down and push/tow the airplane past the bottleneck if needed. As our Navion pilot discovered, there are few things more embarrassing than taxiing into an obstruction when a few feet the other way would have made all the difference in the world.

Too, the runup pad at a busy airport is no place to play chicken. Just as when near a hangar, slow down and pay attention to wingtip clearances and propwash. If the runup pad is crowded, stop on the taxiway and wait your turn, or complete your runup and pre-takeoff checks there.

If youre the first to arrive at the runup pad, dont taxi into the middle and stop. Find a corner, preferably one that confers on you the number-one-for-the-runway status you deserve, and complete your checks. Be sure to leave ample room for other airplanes to maneuver around you if your clearance is delayed or youre having trouble programming the GPS. And as the accident example below highlights, keep an eye on the other guy.

Watch Out For Taildraggers
On March 26, 2005, a North American AT-6C collided with a Cessna 172K awaiting takeoff clearance at the Chino Airport in Chino, Calif. The AT-6 sustained minor damage while the Cessna was substantially damaged.

According to the AT-6 pilot, the ground collision occurred after he had received a clearance to depart. The pilot stated that as he was taxiing toward the runway, his propeller sliced into the outboard portion of the Cessnas left wing. Oops.

Most taildraggers have little to no visibility directly over the nose when on the ground. The savvy taildragger pilot will perform a series of S-turns up and down the taxiway, all the way to and from the runway, looking for the odd Cessna, wild animal or pedestrian. The savvy pilot of any airplane other than the taildragger will recognize and acknowledge the other guys limitations and keep a sharp eye out for the classic taxi collision.

Night Ops
Nighttime ground operations pose their own set of challenges. For example, how many times have you rolled out after a night landing and aimed for what you thought was a taxiway only to have your landing lights illuminate the grassy area between two taxiways at the last moment. If youre lucky, nothing happened.

Everything weve said elsewhere in this article goes double at night, or when the visibility is down. By definition, you cant see objects and other airplanes as well after the sun sets. At busy airports, there is a huge number of flashing lights everywhere-is that one a Cessnas rotating beacon or something else? Since depth perception suffers greatly at night, you also cant tell if thats a 747 several hundred yards away or a Cherokee much closer. Again, slow down. Pay attention. And know where you want to go and how to get there.

The Final Word
Nothing makes us crazier than to ride with someone who doesnt know how to taxi. The typical mistake is failure to keep the nosewheel on the taxiways centerline. Most of the time, it should stretch out directly in front of the pilot, and run directly underneath the airplane. If its off to one side, or you can only keep it between the main wheels, somethings wrong-either youre taxiing too fast, the airplanes steering linkage needs adjustment, you have a dragging brake, theres a stiff crosswind or you need more practice. After the airplane is checked out, theres little excuse for not being able to track a taxiway centerline correctly.

If you cant taxi, chances are you cant fly really well, either. Its a skillset, just like stalls or steep turns, that requires experience to perfect-although perhaps not as much.

Ground operations are an important component of safe flying. Learning to safely operate an airplane on the ground, near other airplanes, buildings and people, will help take out of your flying some of the uncertainty you may be experiencing and make the rest of it much more enjoyable. Since the taxiway centerline is usually painted yellow, just as the Munchkins said to Dorothy, we suggest you follow the yellowbrick road.

Well see you in the runup pad-well be in the airplane over in the far corner, out of your way, keeping a watchful eye out for you and the other guy.