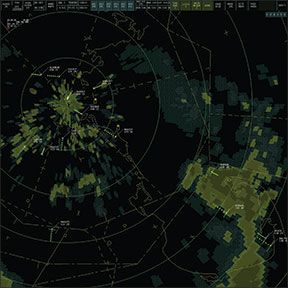 There are three basic ways to navigate in the IFR system: On a published route, visually or via a radar vector. Visual IFR navigation is usually reserved for expediting approaches while published routes can be anything charted, including terminal procedures and en route airways. But radar vectors might be thought of as ATC’s red-headed navigation stepchild: They may or may not involve a published route, and often have a visual component.

Vectoring usually is a rather simple way to get from A to B. It can be used to avoid hazards, cut corners or simplify complex routings and procedures. And like everything else in the IFR system, it has its own rules. Understanding the how and why of radar vectors can help save time en route and eliminate uncertainty in the cockpit.

Two basic kinds
Radar vectors come in two very basic flavors, based on who initiates them, ATC or the pilot. When initiated by ATC, specific rules apply, mostly regarding altitude and when the pilot should expect the vector to terminate in joining a published route or proceed visually. The sidebar on page 10 highlights the conditions under which ATC can provide a vector, as well as its responsibilities.

When the pilot requests a vector, those basic rules still apply to ATC. A controller can’t provide a vector if the conditions—including traffic, radar coverage, airspace or other factors—don’t allow it. That said, the controller should inform you what, if anything, prevents you from receiving the requested vector. If it’s something you can remedy, fixing the problem can get you what you want or need.

Regardless of which side of the mic initiates the vector, it’s going to have at least two components. The first is, obviously, the direction to be flown, expressed as a magnetic heading. The other involves when the vector ends. This can occur at either a published fix, at or when receiving a navaid or upon joining a route segment. In the context of vectoring, these are known as “non-radar routes.” A vector also can end when the pilot reports the airport in sight and can proceed visually.

One exception involves an en route vector, such as one around special-use airspace (SUA) when flying off airways as GPS has allowed so many of us to do. In that case, ATC will provide a heading to keep you clear of the SUA. Once beyond it, you’ll either get another vector toward the original termination point or be re-cleared on your own navigation. The only real challenge here is if communications are lost while on the vector. That’s why the vector is for a specific distance, and you’re expected to know when you’ve flown that far and are clear of the SUA.

Lost Comms
Thanks to the possibility of losing communications with ATC, the question of when a vector ends isn’t just a hangar-flying topic. As previously noted, that’s usually when reaching a published route segment, navaid or fix. What happens when you’re on a vector and lose communications? That’s when the lost communications procedures go into effect and, by accepting the vector, you already should know what to do.

The basics are to proceed to the fix, navaid or route segment your vector clearance included. In the case of the vector around SUA, fly the prescribed distance, then alter course to either proceed to the next point in your clearance or to rejoin the specified route segment. All the while, it definitely would help if you remain clear of the SUA, of course.

The trick to all this occurs when being vectored toward rising terrainy—situational awareness becomes more critical than usual. Over the years, more than a few aircraft have been on a vector, lost communications with ATC, and flown into that rising terrain.

Arrivals And Approaches
In the IFR system, vectors are common when approaching a destination. The usual reason is for conflicting traffic and/or sequencing to the destination airport. In fact, the last vector you might expect to receive on any given flight is a vector to join an approach procedure’s final approach course. The so-called “vector to final (VTF)” has its own rules (see the sidebar on the opposite page) and many IFR-certified GPS navigators have a VTF mode that must be engaged to properly sequence the box through the full procedure.

When it can get interesting is earlier, on a published arrival procedure. Those of us flogging a FLIB can be a problem for ATC when metering faster aircraft into a terminal area. The arrival is supposed to help the controllers cope—by employing the “put them together to keep them apart” concept—but then you came along. When that happens, you can be vectored off the arrival and may or may not rejoin it.

If ATC doesn’t plan for you to rejoin the procedure, the vector clearance must include the next fix, navaid or waypoint to which you’re expected to fly. If the vector is to allow faster traffic to get past you and ATC plans for you to rejoin the arrival, you’ll eventually receive a vector for exactly that. That clearance must include verbiage reminding you to comply with the procedure’s published restrictions, restate the restrictions in a previous clearance, or some combination.

Another twist on terminal-area vectoring is the vector across final. This can be employed for traffic, sequencing or other reasons. In the event, ATC is required to advise when, for example, you’re being vectored across the final approach course, for example, so you won’t inadvertently intercept it and start executing the approach without a clearance.

Altitudes
The altitude(s) at which ATC vectors us for an approach are a matter of interest, also. The restrictions imposed on the controller are similar to those on the approach itself and involve the minimum vectoring altitude (MVA) for the sector in which you’re flying. The MVA is the lowest altitude to which a controller can issue a clearance, and is based on terrain and obstructions. It’s 1000 feet above the highest obstruction within three nautical miles in non-mountainous areas and 2000 feet above it in designated mountainous areas.

When being vectored for a non-precision approach, and this includes RNAV (GPS) procedures, ATC likely will clear you to the altitude depicted for crossing the final approach fix (FAF), if you’re being vectored for a straight-in, or to the published altitude if joining a non-final segment. If the vector is to intercept the final approach course further from the FAF than three miles, you may see some altitude added, on the order of 300 feet for each mile.

For a precision approach, the altitude at which you’ll be vectored must be not less than the glideslope intercept altitude at the planned point of intercepting the localizer.

Pilot-Requested
You can request a vector for pretty much anything. In the bad old days before IFR-approved GPS, pilots learned to game the system a little bit by requesting a clearance direct to their destination hundreds of miles away. In something of a wink and a nod transaction with ATC, a pilot might request a heading of 240, adding “That’s direct to our destination, and we’ll follow along with GPS [or Loran].”

These days, weather avoidance and traffic are the primary reasons pilots request a vector. The former instance is a bit sketchy, since ATC radar usually isn’t good enough to help you pick your way through convective activity. It’s much better to stay visual and use your eyeballs, plus an airborne Nexrad display, to circumnavigate storms. Meanwhile, reported traffic you can’t spot is a great reason to request a vector.

Most of the time when you’re IFR, ATC will vector you and/or the conflicting traffic away from each other. The same is true when climbing or descending and you’re issued an altitude restriction “for crossing traffic.” Requests for a vector to avoid the traffic and continue the climb/descent usually are accommodated if conditions permit.

If you’re flying VFR today, ATC isn’t likely to provide a vector for traffic, however. Again, though, there’s nothing preventing you from requesting one when in ATC contact, as when receiving flight- following services. Of course, ATC can’t vector you if you’re not radar identified. That means you can’t expect a vector right after takeoff.

If vectoring didn’t exist, the ATC system would slow to a crawl, and we’d all be confined to published routes. Weather and potentially conflicting traffic would wreak havoc, and SUA would be insurmountable. There’s some magic to it all, and we’ve barely scratched the surface, but ATC holds the keys, and only vectors under specified conditions. Pay attention, and “trust but verify.”