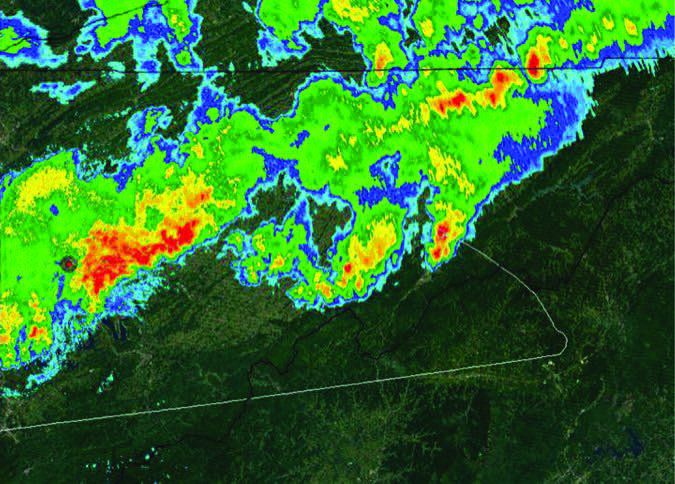 When I first started flying what I consider to be serious cross-countries, there was no such thing as in-cockpit weather radar. Even when flying the best-equipped singles, it was rare to have an sferic device like a Stormscope or Strike Finder. When my route was filled with a line of thunderstorms, I either went around them or landed and found a hotel for the evening. These days, we have near-real-time Nexrad weather radar from a variety of sources, and even ATC is better at pointing out storms and helping us around them.

All of this technology has its limitations, of course. For one, in-cockpit Nexrad can have as much as a 20-minute lag between the time the system captures the radar plot and it appears on your iPad. A lot can happen in that 20 minutes, and the hole you thought you could sneak through can easily fill in, leaving you with few options. For another, it’s foolhardy to let ATC navigate you through thunderstorms; their radar’s resolution just isn’t that good, and depending on a controller to guide you has latency issues of its own. As we’ve repeatedly written, the only way to safely circumnavigate thunderstorms is to remain in visual conditions as you go around them, and sometime that’s much too close. All of this implies you’re tackling these thunderstorms in the daytime, and that there’s good VMC surrounding them at your altitude.

The few times we’ve shared the air with thunderstorms at night have been…enlightening. There was one off Florida’s Atlantic coast that managed to hide itself very well until it was just off my right wing. Bright flashes announced its presence. On another occasion, ATC strongly suggested a re-route to the west to get behind a large area of convective activity. That was before in-cockpit Nexrad and was just as well, since I couldn’t see them at all.

Frequently, thunderstorms seem to come as a surprise to pilots. They either didn’t pay attention to their preflight weather briefing, didn’t obtain one or didn’t care. On those occasions when they were fully briefed, they flew into the thunderstorms anyway. Maybe they were confident their moving maps and color-coded Nexrad would protect them. Even when air carrier crews are strongly urging pilots to avoid nearby storms, some of us just won’t take the hint.

On October 9, 2015, at about 1919 Eastern time, a Columbia Aircraft Manufacturing LC41-550FG impacted the ground in an uncontrolled descent after encountering a thunderstorm near Erwin, Tenn. The private pilot and the passenger were fatally injured, and the airplane was destroyed. The flight originated in Knoxville, Tenn., at about 1830 with an intended destination of Bloomington, Ind. Night visual conditions prevailed. The flight was operating on an IFR clearance.

The flight originated earlier in Orlando, Fla. Prior to departing, the pilot obtained a DUAT briefing that included terminal forecasts predicting showers and thunderstorms from Knoxville north, beginning about 1700. While en route, the pilot diverted to Knoxville to “check the weather.” The flight landed about 1745, and the pilot used DUAT to obtain textual weather reports along the intended route of flight.

At about 1830, the airplane departed Knoxville and climbed to 15,000 feet msl on an easterly heading, paralleling an east-west line of convective weather to the north. At 1836:02, the Tracon controller contacted an airliner to request a pilot report on convective activity and asked if it would be a good idea for the accident aircraft to go through it. The airliner’s crew stated, “Absolutely no; he needs to go somewhere else.”

At 1911:09 the pilot requested and received clearance to turn 15 degrees to the left, and at 1913:46, the pilot was cleared to climb from 15,000 feet to 17,000 feet. At 1918:29, the pilot stated his N-number. That was the last recorded transmission from the accident flight. Radar data showed the airplane descending from approximately 17,500 feet to ground level in approximately one minute.

Multiple witnesses observed the airplane descending, turning to the right and then exploding on ground impact. One witness reported that at the time of the accident, the area was receiving a “hard rain.”

The airplane was equipped to receive XM Satellite Weather, including Nexrad radar, severe weather storm tracking, lightning strike locations and various other aviation weather services. Weather radar data indicated a strong weather cell around the time and vicinity of the accident. At 1855, a convective Sigmet was issued, advising of a line of thunderstorms 50 miles wide along a line that went through the accident region.

The thunderstorm line was reported to be moving from 260 degrees at 30 knots, with cloud tops to 44,000 feet msl.

The airplane wreckage was found in the vicinity of the accident flight’s last radar return. The debris path was fairly compact, and a considerable amount of debris was located within an impact crater about the length of the airplane’s wingspan.

Thermal damage to the aircraft made it difficult to determine if structural failure occurred prior to striking the ground. However, all of the airplane’s major components were located at the accident site. Damage to the propeller assembly was consistent with it being under power at the time of impact. The aircraft was equipped with a Garmin G1000 glass panel. An attitude indicator was located within the debris field; it exhibited impact damage and displayed a nose-down, inverted right-wing-low attitude. No other instruments were readable.

The NTSB determined the probable cause(s) of this accident to include: “The pilot’s decision to fly into a known area of adverse weather, which resulted in the airplane entering a severe thunderstorm and a subsequent loss of control.” The only real question is, “Why?”

It’s one of general aviation’s enduring mysteries. Sure; there’s probably some combination of getthereitis, coupled with the rationalization, “I’ve done this before; I can do it again.” There also may be a misplaced confidence that the on-board equipment will get us through the challenge. Mother Nature often has other ideas, however.

We’ll never know for certain that the accident pilot fell victim to the latency issues associated with processing Nexrad imagery and delivering to our cockpits, but it’s a likely scenario. See the sidebar on the opposite page for more details.

An Example Of Nexrad’s Latency

The image above is taken from the NTSB’s final report on this accident and shows the aircraft track overlaid on Google Earth with the existing Nexrad radar observation, not the one presented to the pilot. The weather was moving from left to right. It’s likely the pilot was aiming for a “soft” spot just to the right of his track, represented in green. It’s likely that, in the time it took for the Nexrad image to be delivered to his cockpit, that area of reduced intensity moved on to the right, to be replaced by severe weather.