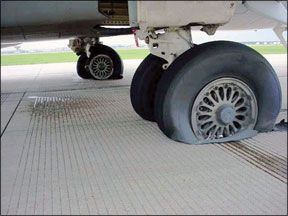 Few pilots pay much attention to their tires. They kick them a couple of times before lighting the fire, or put air in them when they look really low, but thats about it. Thats a little cavalier to us, considering those three (or more, if youre lucky) small, round, rubber donuts not only support the airplanes weight, but also supply the friction necessary to follow the yellow brick road and stop when you get to its end.

As part of a project for sister publication Aviation Consumer, we recently had the opportunity to speak with industry executives about tires and tire failures, as well

as a myriad of other related topics, while researching why aircraft tires fail. We found that, short of suffering a puncture, paying close attention to the airframe manufacturers recommended inflation pressure is your best bet to prevent tire failures. We also found that, to understand why proper inflation is key, we need to understand how these tires are made.

Sticking With What Works

The basic light-plane tire isnt that much different from the ones your grandparents used on their Model T. The current standards for aircraft tires are embodied in the FAAs Technical Standard Order (TSO) C62e, last revised in 2006 (that TSO only addresses tires; inner tube standards are set by the Society of Automotive Engineers).

Instead of the radial-ply tires common on modern automobiles, your light airplanes tires likely are a bias-ply design, where the internal fabric cords are sandwiched between two layers of rubber and laid diagonally-at 30- and 60-degree angles to the tires centerline-and extend from bead to bead. Additional plies are laid opposite to each other. This contrasts with a radial-ply tire, a technology widely used by larger, faster aircraft. Its based on plies laid from bead to bead but at right angles to the tread.

Another characteristic of aircraft tires is their ply rating. A tires “ply rating” molded into its sidewall helps identify its strength, and is an admittedly dated method of rating the tires load capacity (automotive tires use a weight-based load-rating system). Ply ratings do not count the actual number of fabric layers found inside the tire, but indicate an equivalent strength based on industry standards.

One of the characteristics youll note when comparing the cross-sections is those fabric plies. These days, almost all of the fabric used in light-plane tires is nylon, chosen for its high-temperature characteristics, according to Richard Brown, general aviation sales and marketing manager for Goodyear Aviation Tires.

Theres never a free lunch, of course, which means using nylon in our aircraft tires has an unintended consequence: After remaining parked for several days, tires take a set, becoming out of round. That washboard sensation you get taxiing out for the first flight after a couple of weeks? Bingo. Nylon has what tire engineers consider a “memory”-think old-technology rechargeable ni-cad batteries-and will temporarily conform to the tires at-rest shape. Once rolling and heating up from the natural friction generated, nylon will gradually relax itself back to its original shape. The longer you taxi before taking off, the greater chance of the tires losing their “memory” before the takeoff roll. Of course, the heat generated from landing and taxiing back to your parking place helps create the tires “set.” More on heat in a moment.

Another tire component is its tread, that part of the tire actually in contact with the ground. Two main characteristics of the tires tread are of interest to aircraft owners: the compound used and the number of grooves. The tread compounds hardness is a classic compromise. Too soft and the tire will wear much too quickly. Remember the big, pink-rubber eraser you used in elementary school and how easy it was to wear down after only one algebra pop-quiz? Same thing.

At the other extreme, tread compound can be too hard. Results can include poor wet-weather performance and a harsh ride. The Mama-Bear solution seeks wear resistance along with good traction and wet-weather behavior.

The number of grooves is another tread characteristic. Most tires have four grooves; Goodyears Flight Custom III series has only two. Goodyears Brown tells

us the tread grooves serve mainly as wear indicators. “When the groove disappears, remove the tire.”

“They do provide some degree of hydroplane protection, but mostly when new,” he adds. “Another reason for grooves is tradition. Years ago you saw all sorts of tread patterns on aircraft tires, diamonds, blocks and even…smooth tires. The design of the tread eventually fell into the groove pattern seen today on all manufacturers tires.”

Two additional characteristics deserve mention. First is the vents built into the tires. These are marked by small white (tube-type) or green (tubeless) dots painted on the sidewalls and beads. These vents allowing the natural offgassing-evaporation of volatile chemicals from the plies under ambient or greater pressure-to escape the tire. Without them, the sidewalls would develop bubbles of trapped gas.

Another characteristic has nothing to do with tires but with their inner tubes. Until recently, tubes were manufactured from a natural rubber compound. Unfortunately, natural rubber loses pressure much more readily than synthetic materials and, therefore, your tires would lose pressure, too. Enter the butyl rubber tube, now pretty much the standard among all aircraft inner tube manufacturers (since unused inner tubes are perfectly fine, were not saying you wont find a natural rubber tube out there on some shops shelf). Goodyears Brown says the new butyl tubes, first introduced nearly a decade ago, improve air retention by a factor of approximately 10. Steve Chlavin of Desser Tire, probably the GA industrys largest tire retailer, agrees, saying, “The new butyl leak-resistant tubes just dont leak.”

Beyond the plies, tread and inner tubes are the sidewall, beads and liner. The sidewall covers and protects the plies, basically supporting the tread portion and mounting the beads. In turn, beads are fabricated from rubber-embedded steel wire to form a bundle, seating tightly against the wheel to ensure the tire does not shift during rotation. Last but not least, the liner covers the tires interior, serving as a protective barrier between the inner tube and the plies. In a tubeless tire, the liner is thicker to help retain the air or nitrogen used for inflation.

This brings us to proper tire inflation, the most important variable when it comes to getting the most from tires and one of the few things pilots can control. How important is proper inflation? Goodyears Brown says “its the most important thing” when it comes to helping prevent premature tire failures. According to Brown, “overdeflection” or excessive deformation of a rolling tire builds heat as the sidewalls flex. Too much deflection-the industry-standard ideal is 32 percent-results in excessive heat, which can lead to separation and tire failure. And overdeflection is directly related to underinflation. Think about it: Even when properly aired up, an aircraft tire can appear underinflated.

In fact, the ideal 32-percent deflection translates to the tires contact patch, that portion actually in contact with the ground, Brown tells us. Although a mechanism once existed to measure the tires deflection directly, the best way to do it these days is by monitoring tire pressure. Brown says the modern light-aircraft tire will look underinflated even when its carrying the proper pressure. Further, overinflation-within reason-is preferable to underinflation. “A little overinflation is better than a little underinflation,” says Brown. “As long as the rated inflation pressure isnt exceeded, the tire will be okay.”

But what is the proper inflation for an airplane tire? The answer isnt molded into the sidewall; that value is the maximum rated pressure. Instead, the proper inflation pressure is found in the airplanes POH/AFM and is determined by the airframe manufacturer, not the tire maker. As long as the proper size and ply-rating tire is installed, inflate the tire per the recommendations listed in the POH/AFM. Check the tires cold and use a good-quality gauge.

Proper care and feeding of your airplanes tires isnt rocket science, but it does require a little extra effort. Getting down on your knees with a hose and gauge isnt aviations most-romantic aspect, but regularly doing so can save you money at annual and help you stay on the pavement some dark and stormy night.