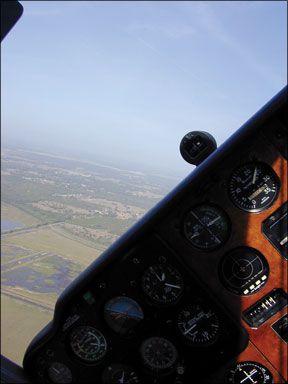 From Day One of our flight training, maneuvers practice fills much of our hours of dual instruction: turns around a point and such, unusual attitudes and recovery from them, and that most-basic skill from putting together all the control elements, flying pattern work. In aircraft so equipped, most of us learn to use the turn gyro when practicing maneuvering flight, striving to master the standard-rate, two-minute turn depicted by our little friend. But as we learn later in actual flying, that training also instilled flexibility and the skill to adapt maneuvers to the conditions. Among the best of all flexibilities is the ability to maneuver beyond our standards-

both beyond the standard-rate turn and past the point where turns become steep.

At times it seems that too few of us practice to maintain competence at the higher demands of flight beyond 30 degrees of bank. Thankfully, with a bit of caution and common sense, steep turns are skills we can practice on our own or, even better, with the security and added safety of an instructor or safety pilot. The payoff can be a lifesaver.

Why You Need Them

Steep-turn skill holds significant real-world application in everyday flying, whether for something as potentially dangerous as trying to escape from a dead-end canyon or the more routine need to complete a non-precision instrument approach by circling while remaining within sight of the runway. With a little regular practice, a pilot should be ready to safely, sanely fly steep turns up to and including the most demanding of such unusual maneuvers: the 60-degree bank, 360-degree turn, all while holding altitude within 50 feet, plus or minus, of our entry altitude. Acknowledging that such circumstances when we need that skill should be relatively rare only heightens the need to regularly hone your real-world steep-turns skills. And should we never actually need to, a great sense of self-satisfaction comes from bumping through ones own wake.

While we can fly for years without really needing to perform a steep turn, when you need it, you need it. Mother Nature seems to delight in throwing at us conditions we didnt expect. Sometimes we find ourselves where wed really prefer not to be, whether up against conditions upsetting to mind and manner, or up a box canyon-with our ability to maneuver smartly our best paddle. In some of those instances, a steep turn executed safely and smartly, gives us our best chance of getting out with airframe, health and ego intact.

Remember Cory Lidle? Its difficult to imagine that he started his last flight thinking of the techniques needed to survive a box-canyon encounter in the heart of the Big Apple. But Lidle and his instructor/safety pilot Tyler Stanger found themselves in such a situation by treating the VFR corridor of the East River as an impenetrable barrier. The steep turn they attempted might well have worked going the opposite direction from the other side of the East River, but from their action it seems apparent they knew they needed a steep 180-degree turn. (For a more detailed discussion of this accident, see the December 2006 issue of Aviation Safety.) For pilots who value the idea of living to fly another day, preparation for the unknown, unexpected and unusual offers the best prospect for survival.

Of G and Stall Speeds

Whether the minimum 45-degree-bank, the 60-degree or the maximum 90-degree-bank maneuver, steep turns translate into increased load on the airplane structure. This applies, of course, to even the standard-rate turn, but we adapt easily to the comparative minimal loads imposed at the relatively low airspeeds we generally employ in standard maneuvering. The important takeaway from all this: As bank angle increases, so does the load on the aircraft.

At a bank of 45 degrees, the load on the airframe rises by 50 percent of normal to 1.5G; at 60 degrees, load increases to 2G, but then increases rapidly so a 70-degree bank triples the airframe loading to 3G. Add a mere five degrees and the load jumps to 4G. If youre flying a Normal category airplane stressed to 3.8G, it just broke.

At 80 degrees, loading is nearly doubled to just under 6G. At a 90-degree bank-which the FAA says cant be performed in a coordinated turn-loading grows further into bad-news territory. For much more on G-loading and the relationship between bank angle and resulting stall speed, see the charts on page 18.

Time to recall our V-speeds, among them the Design Maneuvering Speed (VA) and the Maximum Structural Cruising Speed (VNO): Too-rapid control movements above these limits just may hurt. Time also to review the type of aircraft were flying and its certification category: Standard Category airplanes are stressed to 3.8G; Utility category calls for 4.4G.

Too, as load grows, so does stall speed, increasing at a rate that follows the square root of the load factor. So an aircraft with a landing configuration stall speed of, say, 55 KCAS stalls at a higher speed when flown to a 60-degree bank. How much higher? The 60-degree-bank load factor is 2G; the square root of 2 is 1.41; so the stall speed increases by 41 percent, to 77.5 KCAS. (Again, refer to page 18 for graphics exploring this in greater detail.) Stalls above the design maneuvering speed can damage the aircraft and ruin an otherwise great day. And you can roughly calculate the design maneuvering speed with a fudge factor of 1.7 times the stall speed.

The pilot flying steep turns must keep in mind these factors, lest an unintended stall at a high bank angle-and the higher pitch angle required-find the aircraft taking off on a wild ride nobody wants to take, particularly when close to the ground.

One more point. As speed increases, so increases the bank angle needed to achieve a two-minute turn. So its possible a standard-rate turn may put the airplane at a beyond-standard bank angle.

And since stall speed rises with altitude as well as bank angle, remember both points should for any reason you opt for a standard-rate turn flying high and fast.

Tool You Can Use

When that circling approach or collision-avoidance maneuver is needed-now!-youll have done all the necessary headwork and practice long before. Youll own the maneuver. And when you can execute on muscle memory and mental dexterity, youll stand a much better chance of success when the need arises with no window for replaying your mental training tapes.