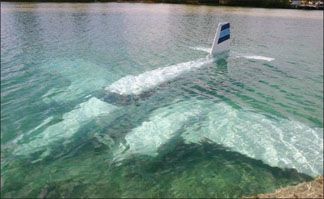 Ditching an aircraft is something you hopefully will never face. Indeed, most of us rarely fly over a body of water of any appreciable size. Those who do seem to arrive at their land-based destinations with some regularity.

But, even if you restrict your flying to territory you think is dry land, a sufficient number of rivers and lakes exist in North America to make the possibility of ditching your aircraft a real one. Of course, if you fly a floatplane or amphibian, you regularly operate to and from water. Even if you exercise the greatest care during your seaplane operations, accidents can and do happen.

Unfortunately, there are a lot of myths out there associated with ditching, along with a huge amount of wishful thinking, mostly associated with surviving the event itself, successfully egressing the airplane and employing whatever survival equipment you carry until youre rescued. Before discussing my favorite ditching myths, a brief preamble is in order.

Shock and Awe
I became interested in ditching and egress the hard way-by surviving such an event. An airplane in which I was a passenger ended up in a river. The simple fact is that nothing you can do-short of actually experiencing a ditching episode-can really prepare you for the event. Since then, Ive developed an egress course and Ive had some interesting questions posed to me, as well a number of misguided pilots explain how they would personally handle a ditching.

While there are any number of stories about airplanes continuing to float for hours-or days-after entering the water, the reality is youll likely only have a few seconds to react after a complete inversion of your aircraft before the overwhelming reaction to being entrapped is unleashed. About that time, the animal instinct to survive becomes paramount, demanding you find an air supply immediately.

While Im an advocate of egress training-its one way I make my living-the simple fact is that training for such an occurrence will make you more likely to survive it. Just as you train to fly the airplane, you should train to survive a ditching or other emergency. Knowing what to do and expect from egress training, plus having been in water practicing life-vest procedures and remembering to take one with you on the way out proves a major advantage.

Even if you dont seek out this kind of training, you should at least acquire and learn to use water survival gear-a life raft, personal flotation devices (PFDs), a first-aid kit and an emergency position indicating radiobeacon (EPIRB), a kind of personal ELT using the newer 406 MHz technology.

Regarding ditching myths, here are a few of my favorites.

1. Bubbles Always Point Up
The number one and the most-commonly misunderstood plan would be to simply watch your air bubbles to determine the way to the surface. The problem associated with this idea is the possibility of silty water conditions or darkness, creating poor visibility at best. Also, youd be sacrificing a percentage of the limited air supply held in your lungs-which can not be replenished-to create this indicator of limited value.

To add to the scenario, what if the aircraft is pointing nose down and you find yourself in the rear of the cabin totally disorientated and unable to locate the now elusive door handles behind and below you?

Yes, its possible that bubbles from sources other than your lungs may help show you which way is up, but the key to survival is knowing-blindfolded and under stress-how to open all of your aircrafts doors and exit the cabin.

2. Just Open The Door
The subject of opening the cabin doors is my second myth. It presumes that a calm and collected individual will open the exit and vacate the premises with ease, or failing that kick out a window and swim to safety.

The reality is that panic will set in over a matter of seconds. What seems an academic exercise when discussing it at a cocktail party will soon-very soon-become all to real to you and your passengers. I have found most of those who, without ever having ditched an aircraft, express confidence in their abilities to quickly and safely get out of a sinking airplane are covering up their fear of water or simply displaying the false bravado for which pilots are widely known-and which causes accidents in the first place.

Pilots who refuse to entertain even thinking about what should be done in any aircraft emergency are not only endangering themselves, but also anyone with whom they fly. Soon after he or she participates in egress training, their anxiety is replaced with respect and understanding of how to survive a ditching event.

3. I Can Glide To Land
A third myth involves refusing to believe one will ever have to ditch. Rather then prepare for a ditching, theyll think that an overwater flight at a sufficient altitude will enable them to glide far enough to dry land should a problem arise.

This might be a good plan until your departure runway is pointed at a body of water and the engine quits just as the beach passes underneath your airplane. Or the winds conspire to cut your gliding distance in half.

Any number of aircraft have crashed or ditched in water, even though they were seemingly involved in operations over dry land and their crews intended to use dry pavement. Some examples include Air Florida Flight 90, a Boeing 737 that crashed into a frozen Potomac River shortly after takeoff from what was then Washington National Airport in January 1982, and another 737, operating as USAir Flight 5050, which ran off the end of Runway 31 at New Yorks LaGuardia Airport in September 1989. According to the U.S. Coast Guard, civilian aircraft are ditched an average of once per day in U.S. waters.

To be valuable in a ditching, wear your PFD at all times before taking off and until after landing. Of course, youll not inflate it until successfully exiting the aircraft, though. This is because, once inflated, its bulk and buoyancy could well prove to be a major impediment to egressing the airplane.Too, an inflated PFD can be punctured by wreckage during the egress.

While the proper equipment necessary to survive a ditching-including rafts, EPIRBs and PFDs-is beyond the scope of this article, I always encourage aircraft owners to acquire the best equipment available-you never know when youll need the extra quality or capability. After all, you didnt scrimp on your avionics, did you?

5. Ill Just Land Inverted!
Fifth, final and my personal all-time favorite ditching myth was explained to me while trying to sell my egress training program several years ago at an aerobatic flight training center. The owner and head instructor stated emphatically that his plan, should he be faced with a ditching, would be to roll inverted and enter the water with the landing gear pointing skyward. In his mind, this flight condition would avoid the anticipated violent nosedown motion of the airplane once the wheels made contact with the surface, forcing the plane deeper into the water.

If you really consider this as an alternative to landing upright, then you probably wouldnt mind an impact at or above 60 mph in a convertible automobile with your head exposed. The very fact that most front aircraft windows are constructed of light Plexiglas, which will most likely depart on impact, would be enough to deter me.

After researching this misconceived maneuver I was unable to find any information substantiating its merits as no one has ever tried it, which is partly why I would not want to be the first.

Staying Dry
Of course, the best solution to the problem of how to ditch and get out of the airplane is to not have to face that challenge. But few people who have ditched an airplane did so intentionally-they just had no alternative at the time. Judicious flight planning, good maintenance and staying ahead of the airplane will help minimize the risk. Short of obtaining some formal training in ditching and egressing, think long, hard and realistically about your equipment and how youll fare once the airplane is in the water.

-Bryan Webster has more than 11,000 hours and currently flies a de Havilland Beaver. To learn more about his egress training, visit his Web site: www.dunkyou.com.