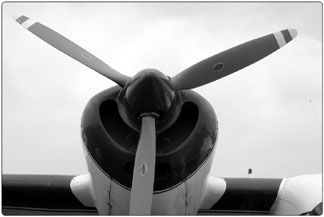 Propellers come in a lot of different sizes, shapes and designs, but they all serve one basic function: to convert an engines rotational force into thrust. They seem fairly simple-and fixed-pitch props are about as trouble-free as any aircraft component gets-but there can be a lot of technology and engineering that goes into them.

To safely, efficiently and proficiently fly our airplanes, there are a few things we need to know about propellers. For example, what procedures do we need to use when our battery is dead or the Bendix drive wont engage and we need to get the engine started? Whats the best way to operate a constant-speed prop, especially when a singles engine quits? And why should twin pilots think seriously before securing an ailing engine?

Its Alive
The first thing many of us should be taught about props attached to piston engines is that we must always treat them as if the engine could start at any moment. This means staying out of the props arc and far enough away from the areas in front or behind to avoid what could be a severe injury if the engine starts. Of course, this is because most piston engines get the spark necessary to burn fuel from magnetos, which generate electricity when rotated. Switches and wiring have been known to be faulty and, even when your mags are switched off, moving a prop will rotate the magneto, possibly generating enough juice to fire a spark plug. Even if only one cylinder fires, that prop can swing with enough force to completely ruin your day.

Hand-Propping
That same basic principle is behind the concept of hand-propping an engine to start it, except when hand-propping, we want the engine to start. If were not ready for the prop to swing on its own, that can be a very bad thing (see sidebar).

Hand-propping done right generally works great in airplanes where the technique was honed-small-engined taildraggers with two-blade, fixed-pitch propellers. The farther you get from that standard, the more difficult (and hazardous) hand-propping becomes. Larger engines usually have higher compression ratios and more cylinders in which your Armstrong starter must overcome suction and drag. Nosewheel-equipped airplanes propellers are closer to the ground, forcing you to lean into the prop arc to pull the propeller through. Three-blade propellers dont allow much throw of the prop before another blade swings by to strike.

Ask yourself why youre hand-propping the airplane. If the engine doesnt have a starter, thats a good answer. But if it is equipped with a starter and you still need to prop it, well, your airplane is trying to tell you something. The need to hand-prop a starter-equipped airplane can be a warning of worse things to come.

Regardless, safe hand-propping demands two well-briefed people and an airplane for which it is a normal procedure. Anything else invites death or injury, aircraft damage and serious possible in-flight consequences.

Fixed- vs. Controllable-Pitch
Early in aviations history, designers learned that propeller efficiency is a compromise. Certain propeller pitches, or blade angles, are optimal for climb but are draggy and slow down an airplane in cruise. Instead, props pitched for high-speed cruise dont perform nearly as well in takeoff or climb. Soon adjustable-pitch propellers came to be, that allowed adjusting the prop blades on the ground to meet the climb or cruise goals of a particular flight. By the 1930s the modern system of the automatically in-flight adjustable propeller appeared, ecoming pretty much standard on the constant-speed designs we use today.

Props Of A Feather?
So whats prop feathering all about? Operating propellers develop thrust, but they also create drag in two directions. One direction is relative to the direction of flight-the flatter the prop blades are (high rpm) into the relative wind, the higher drag they create. Thats why an airplane leveled from climb to cruise will accelerate quickly at first, but hit a drag wall at some speed above which acceleration is much slower.

If one of a multiengine airplanes engines quits or must be shut down, flight performance on the remaining engine(s) depends on reducing direction-of-flight drag as much as possible. This is accomplished by cutting off oil flow to the dead engines propeller by moving the cockpit prop control into feather (or in some older airplanes, pushing a feather button). The blades twist far enough that direction-of-rotation drag is so great the prop stops spinning altogether, and the profile of the blades presented to the relative wind is as small as possible to limit direction-of-flight drag.

Unfeathering Accumulators
Many multiengine airplanes have devices called an unfeathering accumulator, which is merely an oil storage tank, usually located behind the firewall of the appropriate engine. In normal operation, the prop governor stuffs the accumulator full of very high-pressure oil (275 psi or higher in some cases).When the cockpit propeller control is moved into feather, a valve in the prop governor also moves, trapping this oil in the accumulator. Should a prop be feathered and the pilot choose to restart the engine in flight (such as after engine-out practice for a checkride), moving the prop control out of feather opens this accumulator oil valve, releasing high-pressure oil into the prop dome to immediately twist the blades enough that direction-of-rotation drag is low and the propeller spins freely. If fuel is supplied and the magnetos are switched on, the engine should restart. Without an accumulator, unfeathering a propeller can be much more difficult and may require using the engines starter or even putting the airplane into a shallow dive to increase the slipstream air force.

Getting a propeller out of feather puts a lot of strain on the mechanism, and can cause a lot of vibration that may be damaging in the long term.Featherable propellers have devices to prevent them from going into feather when the engine is shut down at the end of a normal flight and the engines oil pressure drops. These devices, called anti-feather lock pins, are connected to centrifugal flyweights in the spinning prop dome. In the case of an actual in-flight feathering, the rate of oil loss and prop dome movement is so great that the blades twist into feather almost immediately. During a normal shutdown, however, the rate of rotation slows somewhat more slowly. As prop speed slows below about 600-800 rpm, the flyweights slow down enough to allow the anti-feather lock pins to drop into place, physically preventing the blades from moving into feather.

The Unfeathering Trap
Say youve feathered a prop in flight and are now attempting a restart. As soon as you move the prop control out of feather (but before the prop spins up to speed), the propeller unfeathering lock pins drop into place. But say you cant get the engine to relight for some reason. If the prop doesnt spin up beyond about 600-800 rpm, the lock pins remain in place and the propeller cannot be refeathered. Youre stuck with a very high-drag, windmilling propeller.

Thats why its generally undesirable to restart an engine shut down for cause in flight, unless youre absolutely certain youve fixed the problem that caused the shutdown (for instance, switching to a fuel tank known to have accessible, uncontaminated avgas after running another tank dry). If you do attempt a restart, or in all cases when you practice actual engine shut-downs and start-ups, its vital you do your practice or start-up attempt over an airport just in case the restart fails and youre stuck with a windmilling propeller.

Prop Management
The ability to control the speed of propellers in flight naturally leads to a debate about the best prop position, especially in cruise. Much has been written about engine management in the last several years. Most of that revolves around the work of General Aviation Modifications, Inc. (GAMI), which has scientifically investigated engine techniques and resulting performance inside the engine. A discussion of GAMIs techniques is outside the scope of this article, but their practices revolve around concern for the pressures created in cylinders. They note that higher rpm keeps internal cylinder pressure (ICP) lower.

So whats the point? Dont accept anything you read or hear about engine management at face value. Take time to read and learn from all viewpoints and evidence, then make a decision for yourself. Youll likely end up with a varying set of power settings and operating techniques, using whichever best suits a phase of flight on a particular day.

There is significant evidence that the single most powerful determinant of engine longevity is not how you run the engine, but how frequently you run it. Engines run very frequently seem to make TBO (or beyond) with little difficulty using any number of operating philosophies, while even the most meticulously managed engines, flown less than 100 hours a year or so, suffer internal corrosion and the aging effects they bring.

Where you set the propeller, so long as it conforms with Limitations contain in the POH and engine manufacturers data, really shouldnt make that much of a difference.

Conclusion
The propellers most of us fly with are subject to terrific forces, but also do a terrific job. A little knowledge of how they work-for and against us-can go a long way.