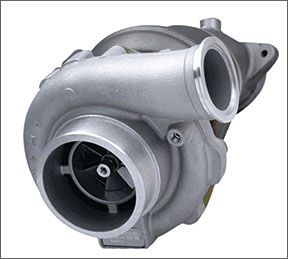 The turbocharger is a useful part of a pilot’s toolbag. When flying an airplane with one installed, it can increase our rate of climb, boost our groundspeed and lift us above a lot of the weather. It also can be used to pressurize the airplane’s cabin, allowing us to enjoy a shirtsleeve environment in the flight levels.

But there’s no free lunch: Turbocharger installations can be maintenance-intensive, heavy and increase a pilot’s workload. Modern turbocharger systems minimize or eliminate many of these drawbacks, of course, but bring with them one thing missing from normally aspirated aircraft: additional opportunities for in-flight failures. How a pilot handles a suspected turbocharger system failure can depend on how well he or she understands what’s going on, or not.

Overview
Basically, a turbocharger compresses ambient air before it enters an engine’s induction system, increasing its density and allowing the engine to perform as if it’s at a lower altitude. This is useful because as we climb to higher altitudes, air gets thinner or less dense, if you prefer. One result is reduced power, since there’s less air to mix with whatever fuel we’re burning. In a very real sense, then, the turbo “fools” the engine into thinking it’s at a lower altitude.

The term “turbocharger” is a shortened form of “turbosupercharger,” a supercharger itself usually being a belt-, shaft- or gear-driven device performing the same task as a turbocharger: compressing air. The turbocharger’s advantage over the supercharger is its use of the energy present in an engine’s exhaust to spin the turbine and compress ambient air. Yes, this exacts an efficiency penalty, but it usually is far less than a supercharger’s weight and the power required to spin it.

The drawing on the opposite page details the major components of a turbocharger installation in a representative airplane. It may appear complicated, but really consists of three main components: the turbocharger, a controller/wastegate and the associated exhaust and induction system plumbing.

Wastegates come in three basic flavors: fixed, manual and automatic. The fixed wastegate, popularized on Continental’s TSIO-360 series engines, always allows some portion of exhaust gas to bypass the turbocharger while some other portion is used to spin it. The fixed wastegate has the benefit of being relatively inexpensive and trouble-free, but also is the least efficient. The TSIO-360 and its fixed wastegate were originally installed on Piper’s Turbocharged Arrow III/IV, the Turbo Dakota and Seneca models II through IV, plus the Mooney 231. Aftermarket modifications may have included replacing the fixed system with an automatic one.

A manual wastegate, as the name implies, is controlled by the pilot. These wastegates were often used on early aftermarket turbocharger installations by Rajay and others. The good news about them is they’re only slightly more complex than their fixed brethren. The bad news is they increase a pilot’s workload and, if forgotten during a descent from high altitude, can overboost the engine, possibly leading to catastrophic pre-ignition or detonation in the cylinders.

Modern turbocharger systems employ an automatic wastegate system, which uses a hydraulic controller to open or close the wastegate. The system uses engine oil as the hydraulic fluid and manipulates the wastegate based on upper deck (turbocharger output) pressure, manifold pressure and/or the differential between ambient and upper deck pressures.

Finally, there are two basic types of systems employing a turbocharger: turbocharging or turbonormalizing. The former often is used to boost an engine’s manifold pressure above what would normally be available at sea level (e.g., the aforementioned TSIO-360, which is redlined at 41 inches Hg).

A turbonormalizing system, on the other hand, enables full-throttle, sea-level manifold pressure to be maintained at much higher altitudes, all the way up to the engine’s “critical altitude,” the altitude at which the wastegate is fully closed and any additional increase in altitude results in a drop in manifold pressure. Turbocharging can require more-costly engine components, designed to cope with the added pressure, while turbonormalizing usually doesn’t. With all that out of the way, let’s explore turbocharger system problems and failures.

Leaks
A leak in a turbocharger system comes in two basic forms: exhaust or induction. Neither is good, because the system loses efficiency, but an exhaust leak can be catastrophic. That’s because hot exhaust gases can be directed onto engine-compartment components, damaging them, melting them or catching them on fire (this is true for non-turbo’d aircraft, also).

Exhaust leaks can be discovered in two ways: visual inspection before takeoff or by inability to achieve normal manifold pressure. On the ground, look for obvious stains on components near the exhaust system. In flight, one way an exhaust leak will manifest itself is through “bootstrapping”; the engine’s manifold pressure will exhibit often-large variations in cruise at or near the engine’s critical altitude.

Another way an exhaust leak can be noticed in the cockpit is a sudden, unexplained loss of manifold pressure. If this happens, it’s likely you’ve suffered such a failure. Due to the threat of an engine-compartment fire—not to mention reduced performance—any kind of sudden, unexplained manifold pressure drop is more than enough reason for a precautionary landing and thorough inspection.

An induction leak, while perhaps not an emergency situation, still affects the engine’s efficiency as well as limits its critical altitude. Think about it: The turbocharger essentially pressurizes the induction system, but if there’s a leak, all that squeezed air will try to escape through the opening. Again, bootstrapping is a likely induction-leak symptom, along with failure to achieve the specified critical altitude.

Engine issues
Just because an engine sports a turbocharger doesn’t mean it can’t develop the kinds of problems befalling normally aspirated powerplants. These can include bad or fouled spark plugs and reduced EGT on the offending cylinder(s); broken piston rings or a stuck valve, leading to loss of compression on that cylinder; or misfiring magnetos.

Magneto misfire can occur in turbocharged engines because the air inside the magneto is thinner, with less ability to insulate its distributor block. The result is internal arcing and misfiring spark plugs. The solution is pressurizing the magnetos, using upper-deck air. If your turbocharged engine misfires at altitude, pressurizing the mags likely will resolve the issue. If your mags already are pressurized but still misfire, they could be due for some maintenance.

A “soft” cylinder—one with low compression—presents a double whammy of sorts for turbocharged engine operation: The cylinder isn’t producing much, if any, power or exhaust. Since it’s exhaust that spins the turbo, less higher-pressure air is provided to the induction system, resulting in less power at the same altitude, or—once again—a reduced critical altitude.

The sidebar at left highlights some operational considerations pilots may wish to think about when flying a turbo.

Wastegate/Controller
So far, we’ve explored turbocharger problems that really aren’t related to the installation itself, but often can be highlighted when a turbo is involved. In looking at issues associated with the turbo system, let’s start with the automatic wastegate and its controller.

Other than the turbocharger itself, the wastegate probably sees the worst environmental conditions. The combination of heat and corrosive exhaust gases it experiences simply doesn’t bode well for a trouble-free component.

One of the most-likely problems operators will have with a wastegate involves accumulation of exhaust by-products and resulting sticking or binding. The pilot may see this issue as a series of manifold pressure fluctuations at any altitude, not just close to the critical one, and when changing power or altitude, i.e., when the wastegate is being commanded to open or close.

That command, of course, comes from the controller, which usually is a fairly reliable component. Yet, it can be susceptible to internal sludge build-up via the oil lines. It also can attract trash or moisture from the upper-deck reference lines. In any case, a poorly performing controller will manifest itself similarly to a sticky wastegate.

The “good” news is it’s usually not difficult to trace the cause of any problems to the turbocharger: Any catastrophic failure will be readily apparent and accompanied by a drastic drop in manifold pressure and, perhaps, a rough-running engine from a too-rich mixture.

Turbocharger failures can involve oil starvation—those bearings need fresh oil to survive—or fatigued turbine blades breaking off and rattling around. Foreign-object damage is another possibility if something internal to the engine lets loose. In this latter event, you’re likely to have a whole ’nuther set of issues to worry about. These failure modes often will be of the catastrophic kind, at least for the turbo.

Less urgent would be worn bearings, which are easy to check: If the turbine wiggles in its housing, it’s time for an overhaul. Similarly, any oil on the exhaust pipe downstream from the turbo, in the induction system or on the spark plugs means worn turbocharger internals and are another indication it’s time for an overhaul. These problems likely won’t be noticed in the cockpit, except through lowered critical altitude over time.

All Together
Modern turbocharger systems—and even older ones—are relatively robust, with known failure modes. The pilot should keep in mind the conditions in which the system’s components operate and know that any sudden manifold pressure loss is cause for an immediate landing and investigation.

Pre-flight inspection also should keep these items in mind, with special attention paid to exhaust pipes (oil and stains), the wastegate/controller (more oil) and overall security of under-the-cowling components like hoses. At all times, be alert for abnormal engine indications.