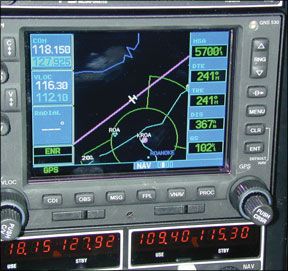 I have a 100-knot airplane. Oh, sure; the airspeed indicator usually reads much higher than that. But when it comes down to what really counts-rate of movement over the ground-my shiny, expensive, 160-knot airplane is frequently relegated to speeds closer to those of an 18-wheeler on the Interstate below me. The reason? Headwinds. Eastbound, westbound-any direction-its not a matter of whether Ill have a headwind, but how strong it will be.

If I plan a trip for Tuesday, on Monday the chosen route will afford a nice little nudge. On Tuesday, the fickle fates will deal a howling 40 knots on the nose. After an unplanned fuel stop, Ill drag into my destination about two hours late, landing only after being forced to shoot an ILS to near-minimums and well after the FBO has closed. The only food available will be a warm Pepsi and a package of cheese crackers. On Wednesday, that same route will once again have a nice little tailwind. Such is my life. Of course, there are good, logical reasons for headwinds. Lets explore them.

The likelihood of seeing a head- or tailwind on any given day is pure chance, right? Wrong. There is such a thing as a prevailing wind direction. It is even a defined term (see the opposite page).

Living as I do on the East coast of the U.S., theres not much future in heading due east in a single. So, most trips start out heading either south or west. Right into a headwind.

Based on the foregoing, you might conclude that the easiest way to ensure a tailwind would be to always fly a northeasterly heading, right? Not so fast. There are such things as local weather patterns, for instance. Two trips flown between the East and West coasts bear this out. Put bluntly, I had a lot of time to contemplate the reasons.

One trip involved ferrying a Cessna 172 from Manassas, Va. (HEF) to the North Las Vegas (Nev.) Airport (VGT). Well into the trip and after departing Little Rock, Ark. (LIT), I was able to stay at a relatively low altitude and pick up a 25-knot tailwind on a leg taking me almost due west from LIT to Amarillo, Texas (AMA). Even though it didnt last all day, I thoroughly enjoyed a 150-knot groundspeed for a few hours and, if scheduling complications had not arisen, I would have been able to make it all the way to VGT that day without undue wear and tear on the crew. Not bad for a 172.

Conversely, had I climbed up to a “normal,” more-efficient altitude for this leg, I would have had a handful of knots of wind on the nose and been forced to deal with “only” 100-110 knots over the ground. But, since the name of the game is groundspeed, the low-level run with this tailwind made much more sense. Obviously, there was a high-pressure system somewhere to my north, and its clockwise circulation was giving us the push I so richly deserved.

The other trip occurred with my Debonair, trying to get back from the West coast. After dealing with 40- and 50-knot headwinds most of the way to California, I was positively salivating at the idea of those same winds helping me along on the way home. Alas, it was not to be. The forecast winds (from 150 degrees at 20-30 knots) at the 11,000-foot altitude I needed to be above most of the minimum en route altitudes along the route would present a headwind most of the day. This was because of yet another high-pressure system hovering out to the east, this time over central Colorado. So, I slogged out to Winslow, Ariz. (INW) for fuel before a second leg terminating for an overnight in Wichita.

The next day was the exception that proves the rule: I made the 940 nm from Wichitas Mid-Continent International Airport (ICT) to Manassas, Va. (HEF), in an easy-to-handle 4:45, thanks to a blistering tailwind boosting my 100-knot airplane into one boasting some 220 knots over the ground for most of the trip. After slowly making my way past that Colorado high the day before, a low-pressure system over the Great Lakes took charge and provided a push home. Like winning the lottery or having dinner with Julia Roberts, stuff like that just doesnt happen to me every day. The next day, the surface winds howled and locations to the north saw some snow.

Of course, theres a lot more to local weather patterns than just the position of highs and lows. Topography-both natural mountains and man-made obstructions-play a role, as do other weather phenomena like fronts, troughs and the like.

The A-B-Cs Of Headwinds

Every ground-school graduate knows how to compute a magnetic heading using true airspeed, magnetic variation, true wind velocity and the legs true course. Plotting these values on the back of the trusty E6-B computer results in a diagram called a “wind triangle,” because the result is a three-sided shape the dimensions of which are dictated by the numbers used to create it. The wind triangle, as its name implies, has three basic components in its simplest form.

First is a line (really, a vector) representing heading and airspeed. In a headwind situation (i.e., when Im about to go somewhere in an airplane), this is the hypotenuse of the triangle.

Another line represents the wind direction and velocity. This line (okay, vector) can be as long as the one representing heading and airspeed. If its longer, youre going backwards. A final vector represents the course and groundspeed. In my experience, this is usually the shortest of the three. Regardless, if youre a little rusty on performing wind triangles on your E-6B, dont forget winds aloft are given in true values, and youll eventually want to convert the results to a magnetic heading.

Its pretty obvious if an arrangement of the vectors will result in a headwind: The vector representing course and groundspeed will be shorter than the one representing heading and airspeed.

The idea of a headwind when our desired course and the wind direction directly oppose each other is a relatively easy one to grasp: We dont need a wind triangle to understand that if the air in which we are flying is moving at 20 knots in a direction exactly opposite our heading, groundspeed will be reduced by 20 knots. But what happens for most of us most of the time is the wind is not directly on the nose. (Unless Im flying, of course, then you can count on it being from the direction in which I want to go.) The result is we must turn slightly into the wind to correct the tendency to drift downwind if were to reach our destination. Of course, this is called a “crab,” and is just like a popular crosswind landing technique, except were not close enough to a runway to land.

If I didnt crab, I would drift downwind and could very quickly be hopelessly off-course. This difference between the magnetic course and the magnetic heading is called the wind correction angle. More important, though, is the question of what happens when I crab my little (or your large) airplane away from my desired heading. Regardless of the wind, the answer is groundspeed between the point of departure and the planned destination decreases. The fact that a crab reduces my groundspeed is one of the headwinds nasty little secrets.

Another nasty little secret headwinds present is also related to crabbing. Presume all this crabbing has been into a quartering headwind. Now, imagine youre going in the opposite direction, but with the same wind. That headwind is now a tailwind, but you still have to crab, right? Even in this situation, wed would be forced to crab to maintain a direct course to a destination. In other words, even with a quartering tailwind, because we are forced to turn into the wind and away from a desired course, potential groundspeed is reduced. Put still another way, even a tailwind can have a headwind component.

The final nasty little secret is something I call the double whammy of a headwind. As weve learned, a headwind slows our groundspeed because the airmass in which we are flying is moving in a direction opposite our intended route of flight and because of the crab we often have to employ. As a result, groundspeed is reduced. Because groundspeed is reduced, it takes longer to get where were going.

Not all is lost, however. There are some easy, relatively inexpensive and non-fattening ways to at least minimize a headwinds effects. Weve summarized three of them in the sidebar above and theres no doubt you can think of others, short of becoming an airlines self-loading cargo.

Even though I understand the trigonometry of headwinds, understanding it doesnt make my lot in life easier. Despite it all, Ill continue to make long flights. Along the way, Ill pray for a tailwind, expect a headwind, react accordingly, and hope the FBO at my impromptu fuel stop is still open when I land.