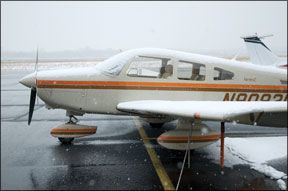 This time of year in the Northern Hemisphere, airframe icing takes on much greater importance for most of us flying personal airplanes than it does at other times. There are good reasons for that, and anyone trying to conduct regular winter operations should closely monitor weather trends and plan accordingly. But the

seasons wet and cold can create an icing-accident situation even on a severe-clear day with dry air. All it takes is some water and cold temperatures.

The fact is, you need not encounter textbook icing conditions for the slick stuff to pose a threat when the ice hides inside the airframe, out of sight, probably out of mind but most definitively not out of the picture. Even though the evidence can melt away, more than enough chilling reality remains to back up the point. The problem-water collecting in an airframe and then freezing, either before or during flight-mainly affects unhangared aircraft but can impact all of us if were not careful. And it can affect all aircraft, large and small.

For example, twice in the first two weeks of December crews of two same-model business jets experienced what one of the NTSB incident reports called “rudder binding” while maneuvering for approach to their respective destinations: Toledo Express Airport in Ohio in the first instance and Birmingham-Shuttlesworth International Airport in Alabama. Both flights concluded uneventfully beyond the control-system binding.

Neither flight encountered precipitation en route; both flights occurred in visual conditions. Rainwater, apparently, seeped into and accumulated in the tailcone-where it froze. Removing the respective tailcones for post-flight examination of both jets revealed ice constricting the rudders control cables and binding the pulleys.

But its not just high-flying pressurized airplanes that suffer such problems. Water inside an airframe becomes a hidden enemy of any airplane whenever it carries its accumulation above the freezing level-and this time of year, for a large chunk of this country, that level often starts on the ground. Significantly, even in the summer an unpressurized, naturally aspirated piston airplane can clear the freezing level. Thus, any accumulation of water becomes ice wherever it collects in the great unheated expanses of an airframe exposed to freezing temperatures.

Aside from the jammed rudders of the business jets, we found reports of control-system jamming on a turboprop twin and several piston singles-with ailerons and flap use impinged or blocked completely. See the sidebar below for some additional examples.

A number of maintenance techs polled for this article cited instances of fixing airframe damage explainable only by the freezing of water trapped in space under the skin.

As we know, water expands at the point it transitions to solid from liquid. This is why we drain outside water lines in the winter if we live above latitudes where freezing temperatures regularly occur. Left trapped in pipes, water swells as it freezes, generating enough force to rupture steel pipes, split rubber hoses and deform valves.

When considering an aircraft, water trapped in a small space beneath the skin of a flap or aileron, elevator or rudder, becomes an irresistible force upon freezing, working against a meant-to-be immovable structure. The result can be loosened or popped rivets, skin cracks around rivets, even deformed skin.

As youll see in some of the accident and incident reports, water seeping into places it shouldnt be can also restrict or outright freeze controls, whether by trapping cable runs, freezing pulleys or trapping levers or control horns. And dont forget the impact of the waters weight, whether liquid or frozen.

Depending on how the water gets into what, its possible-its happened-that a chunk of ice in one part of a wing or control surface may create an imbalance issue. One aileron may be heavy-as well as constrained-due to ice that isnt in the opposite side. Ditto for water in wingtips, wing bays or in a tail surface or aft fuselage.

Get a pound or two of ice sitting far enough aft in the fuselage and youre likely flying out of CG-regardless of how carefully you plotted the load, the fuel and the occupants weights.

Aileron imbalances may be apparent if-absent the effect of wind-one aileron keeps dropping after you center the control yoke or stick. A CG issue, however, may not show up until youre airborne-and wishing you werent.

Ice in the Fuel

Honestly, we shouldnt have to have a conversation about the threat of water accumulating in a fuel system. Flight instructors start indoctrinating students on Day One of flight instruction: “Sump the drains until you see no water!” But what about those days when the airplanes cold-soaked at below freezing when you arrive? Freeing lines, filter, carb float bowls or fuel strainers of frozen water is every bit as big an imperative-but not as easy as draining the sumps.

Turbine aircraft often use fuel additives to keep the kerosene-like Jet A from becoming thick or syrupy in sub-zero temperatures and that same chemical helps keep water both in-solution with the kerosene and from forming ice crystals-the issue at the heart of the British Airways 777 accident at Heathrow in January 2008.

Many transport-category and some business-turbine aircraft use some form of heating to keep the Jet A fluid and flowing. Piston airplanes, however, dont use fuel additives or tank heaters; gasolines freezing temperature is much lower than Jet A and even turbocharged piston airplanes dont fly high enough to need fuel heat. But since water is not as soluble in gasoline as in kerosene, it generally pools or collects in low spots. Put the outside air temperature a few degrees below freezing for a few hours and all those slugs of water at all those low points become plugs-ice plugs that probably wont budge without exposure to thawing temperatures.

In the incidents examined, the aircraft was cold-soaked at below-freezing temperatures before and during their all-too brief flights. In several instances the accident airplanes sat out in heavy rains before flying-and then suffered subfreezing temps even before the flight or encountered the freezing layer while on climbout.

Heat is The Only Sure Cure

Most, if not all, airplanes suffering in-flight issues with internal ice previously endured rain-in some instances days of it, in others only a few hours of downpour. Regardless, rainwater found its way into the airframe.

Of course, no airplane is completely watertight-even composite airframes have seams where major components come together. And they all have cabin and compartment doors that can fail to seal well, along with inspection covers and plain old nooks and crannies where, for example, control rods and cables are routed.

Unpressurized airplanes can have dozens of entry points: wings, ailerons, flaps, horizontal and vertical surfaces. Pressurized airplanes have similar passages into the airframe-the only real differences involve the passenger cabin. When any water leaking in pools itself, it will freeze when the airplane climbs to sub-freezing altitudes or when the freezing level is at the surface. Period. If it rains hard enough and long enough, some water is going to find its way into any airframe parked in the precip. Plan on it.

So the best and easiest way to counter the threat of internal ice is also the most-logical and simplest: hangar it ahead of rainstorms. For those times when the hangar solution is unavailable, see the sidebar above for some simple steps to help drain the frame.

If you find yourself with issues such as “jammed” controls or any other problem in which the prior presence of rain and sub-freezing conditions makes you suspect internal ice issues, try some of these countermeasures:

First, do a controllability check to determine if you can maneuver in any axis and if so, which ones. Disengage the autopilot if its activated, and hand-fly. For now, dont fiddle with power settings. Well get to those, but right now, you need to determine what works and what doesnt; changing a bunch of settings only adds to the confusion. Note the outside air temperature and try to remember how long its been that cold.

Once youve identified and confirmed a jammed control system, gently try to work it. Avoid, however, putting so much force on a control linkage that something might break. Remember, cold makes metal more brittle and anything already taxed or deteriorated may, with the application of excessive force, decide to give up altogether. The exception: If its life-and-death, of course, then applying lots of force may take precedent over crashing. But, a jammed control at altitude isnt life and death. Youve got time and fuel to work the problem; dont panic, fly the airplane and come up with a plan.

Even if you resolve the jammed control, its probably a good idea to consider diverting. In any case, you want warmer air. Descending out of the cold air in many cases will be all you need to start things thawing.

But if merely descending wont get you into warmer air-or a good bolt hole isnt available due to weather on the surface or prevailing winds-diverting is your next best option. Presuming the control jam occurred soon after takeoff, turning around and heading back to your departure airport might be a good bet. Consult with ATC and/or flight service to find the closest warm air; sometimes it can be only a few miles, or feet.

And if you deem the situation serious enough, get ATC involved and declare an emergency; it never hurts to have them on your side.

Of course, weve long known of, respected and even feared the prospects of airframe icing the old-fashioned way: flying a freezing airframe through visible moisture, be it rain or cloud.

But one unusual type of icing threat exists, one not generally forecast and possible without encountering visible moisture: Dew or condensation from clear air, in-flight. This has been seen to occur in high humidity conditions when the OAT hovered both slightly below freezing and just above the dew point.

When moisture in such saturated air strikes the sub-freezing airframe, it reacts to the temperature drop by condensing and then freezes. No clouds, no rain-and no way out save finding lower humidity or higher temps.

In a number of cases weve heard of-and two weve seen first-hand-the solution was a few miles away to where temperatures plunged so far below freezing that the dew point dropped even further thanks to the much drier air-or, put another way, lower relative humidity.

Though clear-air icing might be an extreme condition, its not at all uncommon for an airplane left on a ramp in the rain to collect water. If that water freezes, it can present real problems. Prevention is the best cure-put it in a hangar, or use a cabin cover and consider taping over obvious entry points.

The accident record is littered with cold-weather events that can be traced to unknown icing. Dont add to that record.