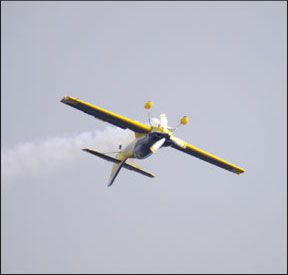 We compared the Neutral Recovery Controls and the Hands-Off methods of spin recovery to the tried-and-true NASA Standard recommendations in Part I of this series (June 2007). Well now look at recovery strategies for airplane upsets specifically involving excessive angles of bank. Since leading supporters of Neutral Recovery Controls steadfastly maintain the method works in any attitude and in any airplane, well compare this strategy as well as the instinctive Split-S reaction (i.e., “Just pull, baby!”) to a more traditional roll recovery as embodied in the Power-Push-Roll procedure.

To perform this comparison, the recovery strategies were put to the test during three familiar upset scenarios simulated at altitude. As was done in the spin experiments discussed last month, index marks were used in the airplanes tested to ensure accurate placement of the controls for the Neutral Recovery Controls method. Specific abort points were established for each scenario as well. The abort points represented the transitional instant from the normal flight mode into the unusual attitude recovery mode and the implementation of the particular recovery technique.

The first upset scenario involved a steep, level turn to the left that was allowed to decay into a descending spiral. The Commercial Pilot Practical Test Standards (PTS) stipulate a 50-degree bank, plus or minus five degrees. Altitude variations must not exceed 100 feet. Consequently, the test airplanes were banked to approximately 55 degrees and allowed to descend 100 feet. Recovery actions were initiated as soon as the airplanes exceeded Commercial PTS limits.

A Cessna 150M was stabilized in level flight at 2500 rpm and just over 90 knots. The turn scenario was commenced. Since the 4G pull specified in the Neutral Recovery Controls method is inappropriate in the Cessna 150M, the pull was restricted to an estimated 2.5-to-3.0G tug on the yoke. This provided a similar margin to the Utility category design limit that a 4G pull provides in the Acrobatic category.

Neutral Recovery Controls resulted in a slight decrease in airspeed. Even so, the bank angle increased somewhat with no sign of recovery to wings-level flight; the airplane remained stuck in this spiraling limbo. Similarly, the Split-S method resulted in increasing bank angle and G-load trends with no sign of returning to level flight. Releasing the aft elevator input and rolling to wings-level promptly terminated these ongoing spirals. Power-Push-Roll, by comparison, required just 100 feet to return the airplane to level, controlled flight.

The same scenario was performed in a Standard Decathlon starting at 2300 rpm and 105 mph. Surprisingly, the 4G pull applied per the Neutral Recovery Controls method instigated a power-off loop that was tilted to the left. Just prior to triggering an accelerated stall in this skewed loop-at which point, the airplane was in a nose-high, power-off, banked attitude-Neutral Recovery Controls was aborted in favor of releasing the aft elevator pressure and rolling the wings to level flight. The Split-S likewise failed to effect recovery. On the other hand, Power-Push-Roll returned the airplane to level, upright flight in 300 feet.

Next, the turn scenario was tried in a Pitts S-2B with the power initially set at 20 inches of manifold pressure. The Neutral Recovery Controls and Split-S techniques merely tightened the downward spirals; Power-Push-Roll recovered the airplane in 400 feet.

This scenario involved a simulated wake turbulence encounter in the Standard Decathlon and the Pitts S-2B. The airplanes were first configured for slow flight similar to normal traffic pattern operations. A half snap roll to approximately 180 degrees of bank was used to simulate a worst-case encounter with wake turbulence. Recovery was initiated as the airplanes approached inverted.

The Decathlon was stabilized in level flight with 1800 rpm and approximately 75 mph prior to simulating the wake encounter. Neutral Recovery Controls consumed 500 feet to return to level, upright flight. The Split-S cost 400 feet, and the airplane experienced stall buffet throughout the recovery. Power-Push-Roll used 250 feet to reacquire level, upright flight.

The Pitts was established in level flight with 15 inches of manifold pressure resulting in about 100 mph. Both Neutral Recovery Controls and the Split-S methods consumed 1000 feet of altitude to return to upright flight. The heavy pulls dictated by these recovery schemes also resulted in significant stall buffet all the way around to level flight. Aggressive and continuous rudder action was required to prevent a spin departure in both cases. Power-Push-Roll, though, returned the airplane to level flight in 150 feet; furthermore, the airplane remained unstalled during the recovery.

An encounter with wake turbulence in the traffic pattern, especially one that rolls an airplane almost inverted, is indeed a dire situation. Recovery may be difficult or impossible given the deficiencies in speed, altitude and control authority inherent in traffic pattern operations, no matter what method is employed. Even so, it should be quite clear that the significant pulling advocated in Neutral Recovery Controls and the Split-S method is potentially a far more dangerous proposition than rolling toward level flight.

The last scenario replicated a low-time aerobatic pilot bungling an attempt at sustained inverted flight. A half roll was performed to establish inverted flight. The nose was then allowed to drop toward the horizon line, at which point the inverted flight was aborted and the recovery process started.

The Decathlon was set in level, inverted flight at 80 mph and 1800 rpm. Forward elevator pressure was released and the nose fell toward the horizon. Neutral Recovery Controls required 700 feet for recovery; the Split-S, 800 feet. Noticeable grayout-the narrowing of the visual field, lightheadedness, and loss of color perception that often precede blackout and G-induced loss of consciousness-was experienced during both recoveries as well. By comparison, Power-Push-Roll required 400 feet, and no adverse physiological effects were felt.

Similarly, the Pitts S-2B was rolled to inverted and stabilized at 20 inches of manifold pressure prior to the simulation. Neutral Recovery Controls consumed 600 feet with the airplane buffeting in stalled flight throughout. Rapid rudder inputs were required to prevent spin entry.

The Split-S required 800 feet, with a peak load of five Gs and significant grayout. Power-Push-Roll, by contrast, required 200 feet. No stall buffet and no adverse physiological effects were encountered with this method.

For the three simple-yet-realistic scenarios tested, the traditional roll recovery technique clearly outperformed the alternatives. Neither Neutral Recovery Controls nor the Split-S returned any of the test airplanes to wings-level flight from the descending spirals.

Compared to Power-Push-Roll, the best the alternatives achieved in the wake turbulence scenario was still 1.6 times more altitude lost; the worst was a whopping 6.7 times more total altitude lost. Instances of potentially dangerous accelerated stall buffet and grayout were prevalent during recoveries using the alternative methods, too. For the scenarios investigated at least, Neutral Recovery Controls turned out to be nothing more than a glorified Split-S technique.

According to NASAs “Airplane Upset Training Evaluation Report,” published in May 2002, several airlines have adapted this program for use in their training departments. The parallels to traditional light airplane upset recovery are unmistakable, especially the importance of pushing the elevator control forward and rolling to change the bank angle rather than pulling back on the elevator control.

NASAs upset training report identified several key issues that are relevant to airline and light airplane pilots alike. Among them are the importance of both book knowledge and hands-on proficiency, the use of rolling to recover the airplane during a banked upset and the effects of stress and surprise on pilot performance.

The report also acknowledged the vital role that repetitive practice plays in a pilots ability to recognize a particular upset scenario, to understand the relationship of that scenario to the aircrafts energy state and to respond appropriately. Notice, too, this critical point: Pilots in the midst of a full-blown airplane upset generally have one shot at recovery. Therefore, learning to implement the correct recovery actions-even if those actions might appear to take slightly longer to complete-is far more important than taking either immediate-but-inappropriate action (i.e., flailing on the controls) or no action whatsoever (i.e., freezing at the controls).

As was pointed out in Part I, early recognition of the conditions leading to an inadvertent spin or an airplane upset is the most effective strategy. The farther an airplane is allowed to progress into an unusual attitude, the lower the probability of a successful outcome. Yet once an unusual attitude event is underway, traditional recovery methods remain the most effective across a wider range of airplanes and flying conditions. Alternative techniques may have their place, but the Law of Primacy again dictates that pilots learn the tried-and-true standards first. From there it might be worthwhile to discuss alternative methods, provided the context and their limited applicability are fully understood.

Recall, too, that no advertised recovery method can be mastered by reading about it. The recovery actions discussed in this series involve precise control movements that are often contrary to the self-preservation instincts triggered by a stressful situation. Scenario-based training in a controlled environment is the only way to learn how to recognize the warning signs preceding an unusual attitude event, as well as to train the mind and body to react appropriately should an airplane depart from controlled flight.

The number of ways airplanes can enter an unusual attitude are almost infinite. Nonetheless, unusual attitudes in light airplanes tend to resolve themselves into either a spin recovery or a roll recovery (i.e., a change in bank angle). The traditional methods developed to deal with these two eventualities have been around for a long, long time. Healthy skepticism, therefore, is warranted any time a so-called new, or simplified, or cure-all recovery method is offered to the aviation community.