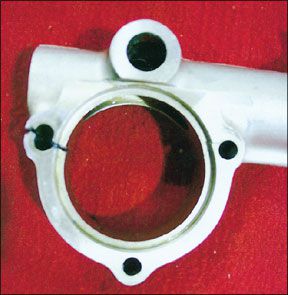 The following information is derived from the FAAs Service Difficulty Re-ports and Aviation Maintenance Alerts.

The l/h main landing gear failed to extend, but trailed. The pilot was able to rock it into the down and locked position and make a safe landing. Inspection revealed the (p/n 1281001-3) actuator body had cracked clear through the forward attach hole and half-way through the aft attach hole.

This damage is unrelated to the condition addressed in service bulletin SEB01-2. The submitters suspect failure of the actuator body may have resulted from shear stress on (its) attach bolt holes due to the high number of gear cycles over the life of the aircraft.

Both cylinders (p/n SA52000-A20P) installed on an IO-520 in a Cessna 206 failed at takeoff power settings within two hours of each other. In both instances, the

heads completely separated from the barrel causing (additional) damage to the baffling and exhaust collector and severing the fuel injector line.

The magnetos point set only had 9.3 hours when misfiring began to occur. Inspection revealed the plastic portion of the cam follower had melted, causing the misfire.

During an attempted engine start (TCM O-200 in a Cessna 150), the starter was heard spinning, but the engine would not crank. Inspecting the clutch drive assembly (Niagara Air Parts p/n CAM641 500-20), the larger drive gear was found separated from the shaft, allowing it to spin freely.

Closer inspection revealed the drive gear was attached to the shaft by braising. Due to the high torque involved in the starting process, it would appear this method of attachment is insufficient. A Niagara Air Parts representative speculated engine kickback on start or shutdown may have caused the separation.

The pilot noticed the r/h magneto-installed to a Lycoming O540F1 in a Robinson R44 helicopter-produced excessive rpm drop after startup. Investigation revealed the magnetos distributor gear had 13 missing teeth (all pieces were recovered). After an hours operation and a cold night on the ramp, the l/h magneto failed-five teeth were missing. Rotorcraft harmonics may place additional stress on the nylon gear.