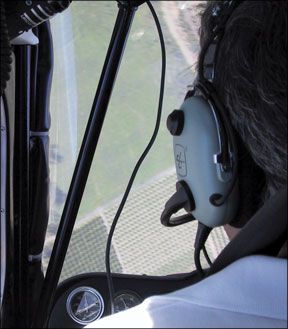 The mere mention of “unusual attitudes” not only raises eyebrows but-as pilots conjure up out-of-control airplanes plummeting from the sky-can measurably elevate stress levels. The phrase is often a catchall, including encounters with inadvertent stalls and spins, wake turbulence, and uncommanded spirals. Yet a stall by itself, though often a precursor to an unusual attitude event, is not an unusual attitude

per se. For purposes of this two-part series, well divide our unusual attitudes into two subgroups:

We can enter an unusual attitude an infinite number of ways. Ultimately, however, the unusual attitude will resolve into one of our two subtypes. From this standpoint, recovery procedures for full-blown unusual attitudes boil down to either a spin recovery, or a roll recovery. But before proceeding, the following points must be clarified:

First, early recognition of the conditions leading to an inadvertent spin or airplane upset is by far the most effective strategy. Unusual attitude events dont usually occur in a vacuum. Most are avoidable if pilots maintain awareness not only of the ever-changing flight environment, but of the control inputs they are making as well.

Second, no advertised recovery method can be mastered just by reading about it. Recovery actions-regardless of the method-involve exacting control manipulation perhaps contrary to the self-preservation instincts normally triggered by the stress of an unusual attitude. Scenario-based training in a controlled environment is the only surefire way to learn how to recognize the warning signs preceding an unusual attitude event, as well as to train the mind and body to react appropriately should an airplane depart from controlled flight.

Third, no unusual attitude recovery method can be claimed to be infallible. The farther an airplane is allowed to progress from controlled flight, the lower the probability of a successful outcome.

For example, one FAA study found that 93 percent of stall/spin accidents were initiated at or below traffic pattern altitude. At such an altitude, even if a pilot possesses spin recovery skills, its already too late in the majority of cases. Similarly, even if altitude isnt a limiting factor, no method for spin recovery may be effective if a pilot exceeds the one-turn margin for error built into certificated, single-engine airplanes operating in the Normal category (and some of those airplanes when operating in the Utility category, too).

The first spin recovery method to come about as a result of an empirical exploration of spinning came from the U.K. in 1916. The method called for shutting off the engine and placing the controls-aileron, elevator, rudder-in their neutral positions. Early airplane certification standards in the U.S. even required that all airplanes be recoverable from normal, six-turn spins with the power off and the controls neutralized. But that was quite a long time ago. Yet Neutral Recovery Controls has recently been resurrected as a panacea not just for inadvertent spins, but also for any unusual attitude. Advocates have been unequivocal in asserting that this method from the past is “bulletproof” and will recover any airplane “every time.”

Another early yet short-lived certification standard required airplanes operating in the Acrobatic category to be recoverable from six-turn spins in not more than four additional turns after releasing all of the controls. In the 1980s, a derivative of this free-release technique was introduced to the aviation community.

Known as the Hands-Off Method (among other names), pilots were instructed to close the throttle, take their hands completely off of the stick/yoke, and apply full rudder opposite to the spin. Articles introducing Hands-Off promoted it as an emergency spin recovery method that seemed to be applicable to most light airplanes.

Precursors to the NASA-standard spin recovery actions, on the other hand, were formally introduced in 1936. By 1964, Type Certification Spin Test Procedures explicitly listed these actions, stating, “All spin recoveries should be made using the NASA spin recovery technique [consisting of] ailerons in neutral position, full opposite rudder to stop rotation, followed by forward elevator control….” The document also states, “Evidence of an uncontrollable spin would be present if recovery cannot be effected…by using normal NASA control recovery movement.” The procedure assumes that the throttle is set at idle.

Both the 1989 and 2003 versions of the Flight Test Guide for Certification of Part 23 Airplanes continued to recommend the NASA protocol to manufacturers and test pilots: “Recoveries should consist of throttle reduced to idle, ailerons neutralized, full opposite rudder, followed by forward elevator control….” Eighty-nine percent of FAA DER test pilots surveyed follow this very procedure during certification spin testing; the other 11 percent employ slight variants of the NASA protocol. Moreover, 94 percent of the test pilots believe NASAs standard to be the most effective for recovery in light, single-engine airplanes.

Note that all three methods call for the power to be at idle during recovery. Interestingly, the revived Neutral Recovery Controls method as well as Hands-Off made headlines based on empirical observations in high performance aerobatic airplanes. Aerobatic airplanes, however, are designed with a much different mission in mind than non-aerobatic airplanes. For one thing, stricter spin standards apply for certification in the Acrobatic category. For another, a Pitts is not a fully loaded Cessna 206 on floats.

Confined to the proper context, the alternative techniques have undoubtedly helped some pilots out of trouble. But with all other things being equal, its important to realize that in those instances where Neutral Recovery Controls or Hands-Off will recover an airplane from a spin, so too will NASA Standard effect recovery. The converse, however, is not true-many documented instances can be found where NASA Standard works, but the other schemes do not.

In the 1970s and 80s, NASA conducted the most extensive light airplane spin test program ever undertaken. Various spin recovery techniques were compared over the course of 8000 spin turns in four representative airplanes. Spins were allowed to develop for one, three, six, and in some cases, more than 10 turns. Spin entry conditions included various combinations of acceleration, roll, yaw, pitch, power, flap settings and landing gear position. The effects of mass distribution, limited center of gravity changes and control inputs were evaluated as well.

In AIAA Paper 86-2597, NASA concluded, “The results of the investigation confirmed the relative effectiveness of the [NASA Standard] recovery procedure, and it proved to be the most rapid technique for all the test aircraft.” Compared to NASA Standard, Neutral Recovery Controls resulted in slower recoveries for the more fuselage-heavy mass distributions tested; it became completely ineffective with the more wing-heavy mass distributions.

AIAA Paper 93-0016 chronicles a spin test program using a Cessna 150J. The researcher evaluated the airplanes response to recovery inputs applied at the moment of spin departure and at three seconds into the spin. Spins were performed for no-flap and full-flap configurations.

As for Hands-Off, numerous reports of failed spin recovery attempts surfaced after the methods introduction, prompting a more cautious tone about its applicability. Airplanes in which Hands-Off is known to be undependable include the Cessna 150/152. Evidence in at least one fatal spin accident points to the application of Hands-Off to recover from an intentional spin in another airplane known not to respond to the method reliably-the Bellanca Super Decathlon.

In an extraordinary display of courage, the surviving pilot visited the author to address the trauma of this tragic event, going so far as to perform a number of inverted spins with me in a Decathlon. NASA Standard recoveriess were used.

The alternative spin recovery methods are specialized techniques for special circumstances. In some spins in some airplanes-especially in the early stages-all three recovery methods may indeed be equally effective. The alternative methods, however, can become ineffective much sooner, or more often, compared to NASA Standard actions.

Perhaps the FAAs Flight Instructor Bulletin No. 18 sums it up best: During the incipient spin phase, “recoveries in those airplanes approved for intentional spins are usually rapid, and, in some airplanes, may occur merely by relaxing the pro-spin rudder and elevator deflections. However, positive spin recovery control inputs should be used regardless of the phase of the spin during which recovery is initiated.”

The Law of Primacy postulates that what we learn first sticks with us. Whether its an inadvertent spin from another maneuver, an intentional spin “gone bad,” or even an intentional spin proceeding according to plan, pilots engaged in hands-on spin training should be exposed to NASA Standard recovery actions from the outset-a standard that has been validated and revalidated time and again over the last 70 years. From there it may be reasonable to branch out to special cases involving alternative techniques, provided that the context for deviating from the NASA Standard is spelled out.

The second and final part of this series will look at airplane upsets involving excessive angles of bank. Neutral Recovery Controls and Split-S recovery techniques will be compared to a more traditional roll recovery procedure.