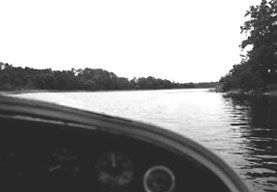 If you fly long enough and often enough, sooner or later youll face the prospect of having to put an airplane on the deck in a hurry. If youre lucky, itll be due to just a sick passenger or maybe a rough engine. But it could just as well be a full-up-oil-on-the-windshield forced landing.

In the latter, youre confronted with the sudden and unavoidable question of where to put the thing down. Is a road the best choice? An open plowed field? Settling into a dense pine forest? A nice lake, near the shore?

Until recently, we thought we knew the answer: the water is by far the most survivable surface upon which to alight in an emergency. We said as much at an FAA accident prevention seminar we were asked to give by Bob Martens, the aviation safety counselor at the nearby Bradley FSDO. We had just completed extensive research on how aircraft fare during ditchings in water and concluded that the odds of survival during a ditching were greater than 90 percent, thus water was a better choice than trees for a power-out landing.

Not so fast, Martens said. As the occasional accident duty guy in heavily forested New England, he had seen plenty of airplanes go into the trees and his gut feel was that the majority of occupants walk away or at least survive.

Good point. We agreed to sweep through the accident database for another look. One things for sure: there are plenty of forced landings to pick from, most of them the depressing result of fuel exhaustion. Its not hard to find between 300 and 400 a year.

Crash or Forced Landing?
As with analyzing ditching accidents, you have to draw a distinction between a ditching and a crash in the water and a forced landing and a crash on land. From the NTSBs summaries, its occasionally impossible to tell which is which. Some reading between the lines is necessary.

For our purposes, a ditching – and for that matter, a forced landing – means that theres strong evidence to suggest that the pilot attempted to touch down under control and that the aircraft didnt impact out of control at high speed. But there are degrees of control and lack thereof. The accident record shows that in many forced landings, pilots set up an approach thats too fast, too high and to a poorly chosen surface. They hit hard, bounce and roll over.

Theres obviously some control being exercised, but no one would mistake the results for a spot-landing contest. Some forced landings seem to begin auspiciously, evolve into a hard landing then degrade into what the casual observer would certainly regard as a crash.

Another difficulty in this analysis is the dead-men-tell-no-tales syndrome. When the accident proves fatal for all occupants, there may not be anyone to offer an eyewitness account of what actually happened. Ground witnesses, if there were any, are often unqualified or unable to judge what theyve seen. In some cases, this information can be gleaned from radio transmissions and witnesses, but not always.

With these caveats in mind, the data we have available to review is obviously flawed and thus we can draw only the broadest conclusions from analyzing it. In other words, our findings cant be considered airtight by any means.

We reviewed some 179 ditching accidents over an eight-year period and 216 forced landing incidents that occurred from 1995 to 1998. Theres no magic to those years; we picked them at random.

Going Swimming
As we reported in the October 1999 issue of Aviation Safety, the survival rate in light aircraft ditching incidents is quite high, suggesting that when theres a choice, a body of water is a safe place to get out of an airplane.

That said, there are far fewer ditchings than forced landings on terra firma. Our review of accident stats reveals about 20 recorded ditchings in U.S. waters each year, compared to between 300 and 500 genuine forced or precautionary landings on land.

Our review of the records found 179 ditchings over the period we examined. Of that total, only 22, or 12 percent, involved fatalities. But that figure needs clarification.

One of the distinctions between ditchings and forced landings is that the former may be more likely to require survival equipment than the latter. If the equipment isnt aboard, a successful ditching in which the occupants all exit the aircraft can turn into fatalities if any or all die of exposure or drowning.

While its true that a forced landing in a remote area can have the same consequences, the accident record doesnt reveal many of those. In most forced landings, emergency personnel are on the scene quickly, even in remote areas.

To understand ditching survival odds, knowing the egress rate is important. In other words, how often do the occupants get out unscathed after a ditching? It turns out to be about 92 percent. That means that more than nine out of 10 people get out of ditched aircraft without significant problems.

Pilots worry about such things as sinking to the bottom before the doors can be opened or flipping over and becoming too disoriented to get out. Yet these things dont seem to happen much.

Ditching survivors often cant recall if the airplane flipped on impact but even it does, the high egress rate speaks for itself. Whether upright or inverted, pilots and passengers somehow manage to get out of their airplanes.

Where you ditch matters, too. Survival rates for ocean areas are lower than for lakes and rivers. In blue water ocean, for example, the survival rate is 82 percent, versus 93 percent for rivers.

How About Land?
So much for the water. How do pilots fare when the only choice is rough terrain, trees or other airplane inhospitable surfaces? In a nutshell, about the same or a bit better, although the prospect of injury is somewhat higher. First, some comments on the data and the basis of comparison.

Working through the NTSB database, the only forced landings likely to be reported are those that result in accidents, and were quite certain that not all of them make it into the database, either. Were confident that most do but know enough of how this system works to have few illusions about either its completeness or accuracy. That said, comparing known reported forced landings on water against those that occur on land is still an apples-to-apples comparison.

We cant comment on accident rates, of course, but we can compare the aftermath. We examined 216 dry-land forced landing accidents that occurred in 1995, 1997 and 1998. These were picked at random from the NTSB files. The results of this search proved interesting.

First, the percentage of these accidents that resulted in fatalities was an encouragingly low 3 percent, meaning the survival rate for forced landings in all kinds of terrain where an accident occurs is 97 percent overall, or a bit better than it is for landings in water. Further, even in cases where there were fatalities, in many cases, some occupants in these aircraft survived the forced landing gone bad.

When you consider injuries sustained by pilots and passengers during forced landings, the picture isnt quite so rosy. In 16 percent of the 216 accidents studied, pilots and/or pax suffered serious injuries. In 20 percent of the cases, minor injuries were reported.

In water landings, only 10 percent received serious injuries but 33 percent reported minor injuries. The typical minor injury in a ditching accident is a bumped head from impact or abrasions during a hurried exit.

If this record is at all accurate, mushing one into the trees means your chances of suffering an injury of some kind are about even. In other words, the odds of the tree landing hurting a little are greater than if you had gone into the water.

However, the good news is that your chances of coming out of the controlled crash alive are quite good. In fact, theyre the same as surviving a ditching. Only 6 percent of the tree landings we reviewed resulted in fatalities.

Logically, pilots and pax should expect to do better when the airplane is landed in open fields or in fields obstructed with minor obstacles. And that appears to indeed be the case. When an open field is the landing area, the serious injury rate drops to 14 percent, while the overall injury rate is about 35 percent. Those are better odds than going into the trees. Out of 65 accidents in which the airplane was landed in what was described as an open field, we could find only one fatality.

Again, worth noting is that what the NTSB describes as an attempted forced landing may in fact have been an out-of-control crash. Sometimes, theres simply not enough information in the reports to split these kinds of hairs.

Conclusion
Clearly, our FAA friend was correct. The fatal accident rate for tree landings is essentially the same as for water. The analysis suggests that either kind of landing, if done correctly and under control, puts your chances of surviving at nine out of 10. But that doesnt mean youll necessarily walk – or swim – away.

The chances of sustaining an injury of any kind are somewhat higher when you go into the trees than when you ditch in the water and the chances of a serious injury are quite a bit higher in the trees. This seems logical and the data we assembled – however flawed – seems to bear out the theory.

So when theres no open field available and the choice is either trees or water, the choice isnt the lead pipe cinch we once thought it was. The overall survival rate between the two appears to be about the same, but the injury rate is higher if you go for the trees.

One thing is relatively certain: Whichever you pick, the airplane will probably be a write off, so trying to save or minimize damage shouldnt figure into your decision. In fact, whenever youre confronted with any emergency in which survival is at question, the airplane should be considered nothing but an expendable collection of aluminum, steel, rubber and fluids.

Thats the way the insurance company will look at it, and thats why you pay them that hefty annual premium.

Paul Bertorelli is a CFI/ATP and editor of The Aviation Consumer.