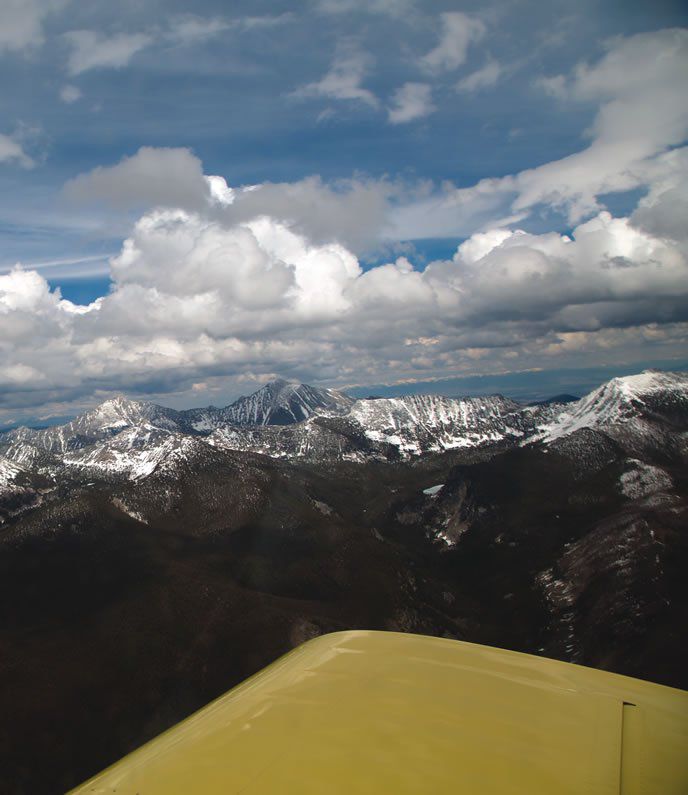 As I accelerated to 60 knots, I was already picking up a load of ice. It coated the windscreen and formed a thickening layer on the leading edges, I knew Id made the right decision. Instead of flying, I was driving. My car was icing up. The day before, the takeoff forecast was for marginal VMC: a ceiling at 2500 feet agl. My destinations morning fog layer was to break up at 10 a.m. local and be replaced by scattered clouds at 15,000 ft. Wanting to do this trip VFR-only, the picture was for marginal conditions at departure but trending toward good VMC.

On more than a few occasions, I had seen those pesky fog layers not break up. Overnight, the forecast collapsed. Instead of 2500 feet overcast, conditions now included 200 feet vertical visibility and freezing fog. While forecasts are part of my aeronautical decision-making, I also heavily rely on what I call weather forensics: considering the weather I experience and comparing it what I expected. Another way to express this idea is to understand the weather backcast, the weather that actually occurred. In this case, I learned that winter inversions caused by high-pressure systems can turn forecasted marginal VFR into unflyable crap overnight. Over the years, Ive also learned that examining and understanding how weather developed and the resulting conditions can help me predict what will happen next.

Follow the TAF Trends
The first bit of forensic data I rely on while still in my planning phase is the TAF trend, which is exactly what it sounds like: If weather patterns are stable, TAFs tend to be stable. The corollary is also true. A fluctuating TAF trend along some part of my route tells me something is happening. To me, TAF trends are as important as the TAF itself. A changing TAF warrants specific questions to the flight briefer, leading toward a better explanation of whats going on. If you call Flight Service and they cant explain why the trend is changing along your planned route of flight, it can be a good indicator you have the wrong briefer. Hang up and call again to find a briefer who can explain the forecast.

Being alert for TAF trends, plus the big-picture stuff like frontal position and movement, are important, but so is studying seasonal weather trends along a route. The more experience I have on the same route, the more I learn the seasonal patterns. I have learned that actual weather does not always comply with the forecast.

Heuristics, Local Knowledge
Heuristics are mental shortcuts or rules of thumb that allow us to extrapolate a little information into a broader pattern. They arent always right, but we depend on them every day in our basic decision-making. In aviation, its useful to have a suite of seasonal and regional weather heuristics for the areas you do most of your flying. Its also important to identify when and where those heuristics apply. For example, Ive learned not to trust winter inversions.

Because every region has its own seasonal weather patterns, a local heuristic can help put weather forecasts into a more meaningful context. In addition to my winter-inversion heuristic, I have a well-calibrated heuristic for spring weather in eastern Kansas, where I grew up and learned to fly. When I see scattered cumulus clouds on a spring day, I expect bumps that may lead to building afternoon thunderstorms. So when I look at forecasts for spring weather, my brain tries to link up the forecast with my past experience, If spring, look for cumulus. If cumulus, expect bumps. And in the afternoon, expect cumulonimbus.

However, a heuristic that works well in one part of the country may not apply to other areas of the country or outside your experience. My Kansas-spring heuristic led me astray on a camping trip in Utahs Canyon Country. As I planned the flight, I was concerned about cumulus buildup I associate with spring in Kansas. I looked for signs of clouds and unstable air, because my heuristic told me spring is synonymous with convective weather.

Angel Point (U706) was an awesome place to camp-until the winds picked up overnight. It began blowing 30-50 knots and shifted from favoring the nice, long 2700-foot east/west runway to the rougher, shorter, uphill north/south version that terminates in a drop-off with some rather sporty wind shear. I was caught off guard because I misapplied my Kansas heuristic.

Check Your Assumptions
When traveling outside your local area to different regions, be sure to check your weather assumptions at the hangar door. When I headed to Utahs canyon country, the FSS briefer only provided synoptic outlooks for the general area. What the briefer didnt and couldnt offer were juicy and helpful anecdotes about spring winds in the canyons. Months later when I shared my experience with an experienced local pilot, she confirmed Utahs canyon country is known for spring winds, and said she could have warned me to pay attention. A call into the FBO in Moab, Utah, probably could have told me the same.

Sometimes before venturing outside your local area, its a good idea to get insights that go beyond traditional forecasts and briefings. Check with the locals to learn their weather experiences, expectations and seasonal patterns at a given time of year. Local knowledge and experience can be your Rosetta stone for putting the forecast in context.

Mountains vs. Valleys
When I look at aviation weather products, I try to visualize the weather in the forecast with the weather I have seen out my windshield on prior flights. Its a form of weather forensics. For example, as I have commuted back and forth between Idaho and Washington, Ive learned an Airmet Sierra-mountain obscuration-for the central mountains of Idaho and the border ranges in Oregon and Washington can take distinct forms that vary with the season.

When mountain obscuration is a snow storm extending from the ground to the flight levels, its always a better idea to drive, even when the passes are coated with deep fresh snow. At other times of the year, mountain obscuration can be a flat cloud deck only covering a portion of the range. It can often be surmounted and flown VFR on top-a key is having reliable holes on either end. On cold winter days, the tops are often below 11,000 feet, but they rise as spring comes. In wintry seasons, getting a sense of cloud tops along your route is vitally important.

When a winter high-pressure system dominates, inversions can hold the valleys hostage. At these times, mountain obscuration can mean clear and a million over the mountains and a fog over some valleys but not others. When a high has been around a while and you see air stagnation alerts in the civilian forecast, you can expect valleys to be choked in fog, too.

My home airport is in just such a valley, one with a chronic winter inversion. But all three forms of winter mountain obscuration look the same from ground level. When trying to visualize what the forecast is telling me, I have found Airmet Sierra uniformly unhelpful. What I have found helpful, however, are the Pireps and other reports from Part 135 operators who are up in it nearly every day. Their descriptions help paint a picture that often clarifies what it is really like out there above the runway.

Webcams along the route can be informative as well. Though I dont prefer them over an automated observation, they can be very enlightening. I have been nearly tricked into thinking weather was decent by reports of scattered clouds at valley airports. The webcam showing a solid block of overcast all the way to the ground can tell a very different story than the forecast from a valley airport. If the tops of that overcast are not ascertainable, I probably wont be flying.

Checking the Backcast
You may think weather forensics is just another term for experience, but I think theres a difference. Weather forensics should involve comparing and evaluating when forecasts are right, as well as when they are wrong, along with the why and how. It includes establishing and calibrating local and seasonal heuristics. Another way think about it is to become an aviation weather private investigator.

A beginner in weather forensics can start by comparing what happened yesterday to the maps that showed the highs, lows and fronts producing the observed weather. Youll have a better sense of what the weather may actually look like out the window when you look at a forecast model. Then dont stop studying, even when the flight is over. You planned your flight and checked forecasts beforehand, so follow up by checking how well the forecasts matched the actual conditions. Look at what changed and try to figure out what drove the weather that happened.

Mike Hart is an Idaho-based commercial/IFR pilot with more than 1200 hours, and proud owner of a 1946 Piper J3 Cub and a Cessna 180. He also is the Idaho liaison to the Recreational Aviation Foundation.