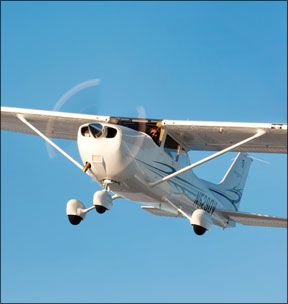 Sometimes the only answer to a situation is, “No, not this time.” Maybe it applies during a to-minima instrument approach where the ground never appears; maybe while attempting VFR flight toward weather deteriorating into IMC. Often, it should be the first part of the answer to a questionable landing-with the second part of the answer being, “Yes, Im going around.”

AirVenture 2010 in Oshkosh, Wis., served to elevate the topic. But venue aside, normal application of the requisite skills and judgment can work there, just as they do elsewhere. As accident statistics, investigations and even imagery show, failure to successfully execute a go-around can be deadly business.

“Should I go around?”

A fair number of situations can raise the question. Consider the following real-world, personally observed scenarios.

Youre passing abeam the runway numbers on the downwind; you configure the airplane appropriately, continue to base leg, adjust the airplane as necessary again, then you clear your turn to final…only as you roll out on final do you discover traffic on the runway…or youre drifting sideways in a crosswind beyond your comfort level…or you missed the turn and find yourself far off the centerline, or youre under control laterally but too high…or too fast…or you can land, but youll be beyond the first third of the available runway with little remaining…or youve gotten behind the airplane and its falling more like a rock en route to a crash site short of the threshold than the sophisticated flying machine it was a few moments ago.

Maybe seeing one of these first starts you to question continuing the approach, one which, after all, worked last time. Maybe thats when you start to question proceeding, but hesitate or outright freeze up on the answer.

Maybe your hesitation to make the no-go/going-around decision stems from something else: traffic closing from behind, another airplane suddenly cutting ahead of you on final; the prospect of overtaking the airplane that just departed or another airplane taxiing into position to depart the reciprocal runway.

The catalyst to take action matters less than the action you take, how you take it, how well you manage the new decision in the process and how quickly you act.

And quickly shouldnt translate into hastily. A poorly managed go-around can bring results as devastating as failing to try.

In fact, according to the AOPA Air Safety Foundation (ASF), go-around accidents accounted for 2.6 percent of all accidents involving takeoff or landing between 1997 and 2006. They comprised 2.2 percent of all fatal accidents.

But the go-around accidents for the period represented a “Lethality Index”-the percentage of actual fatalities-of 16.5 percent, which is far higher than the three percent ASF established for landings, almost the same for accidents occurring during takeoff and initial climb and less than half the 37.4 percent for approach-

phase fatal accidents. In the same study, ASF found aircraft malfunctions accounted for less than 15 percent of the causes for approach, landing and go-around accidents.

Conversely, loss of control unrelated to wind, altitude and airspeed problems accounted for nearly 45 percent of the total, and half the pilot-induced share of these accidents. So, while the go-around maneuver often is the best choice when an approach isnt working out to your satisfaction, its not without some risk. These data are summarized in the graphs at right.

One way to help minimize that additional risk is eliminating the need for a go-around. Easier said than done, of course, but its axiomatic that a good landing results from a good approach. The sidebar on page 18 offers some tips on ways to ensure the approach to landing is as good as you can make it.

Meanwhile, remembering some basics and proficient hand-flying skills will always take you a long way toward a happy resolution.

Going Around Made Simple

So, lets presume youve seen the future and it isnt good: For whatever reason, the approach wont work for you and youre going around. Congratulations on the new decision. So what now?

First, lets disabuse ourselves of the idea that a go-around is simply a touch-and-go without a touchdown. During a touch-and-go, we land with some amount of flaps deployed, start to retract them while rolling on the runway, reset carburetor heat and any other engine controls appropriately, advance the throttle to full power and very quickly lift off again. That sequence is important: touch down, retract flaps, configure engine controls, power up, rotate.

Its important because its the wrong sequence for a go-around. The goal of the go-around is to not contact the runway and the procedure is somewhat the opposite, largely because we start this with the airplane still airborne. Youve been using a relatively low power setting to descend to the runway and now you want to abandon the approach.

First job: Arrest that descent by adding power; if youre trimmed for a steady-state descent adding power will likely convert descent into level flight. Regardless, arresting the descent to avoid touching down-which could produce the conflict youre trying to avoid-requires adding power, and maybe even flying level along the runway for a bit while you do other stuff, like accelerate.

Then, as go-around/takeoff power is established and the airplane is accelerating, smoothly pitch up to establish a positive rate of climb. In many airplanes-especially if full flaps have been applied-pitching up will be done for you as the combination of full power and extended flaps tends to force the airplanes nose up rather abruptly. Thus, significant nose-down pressure on the pitch control may be required.

Wed argue against doing much with the pitch trim control at this point. Presumably, youve trimmed the airplane for its final approach speed, which usually isnt that different from VY. Applying full or go-around power will definitely result in a pitch up you might want to trim away, but-if all continues to go well-in a few moments youll be retracting the flaps, which will usually remove most of the need to re-trim. In our view, maintaining a healthy push on the pitch control until you can get the flaps starting up reduces your workload. And during a go-around, keeping the workload manageable is key. Regardless, its still your responsibility to establish and maintain a pitch attitude appropriate to the maneuver.

Once the airplane is climbing, adjust pitch for the desired airspeed. With full or partial flaps extended, this could be something well below its best rate of climb airspeed, VY. If obstacle avoidance is an issue, VX, best angle of climb, should be the target. Again, however, with flaps out, the desired initial speed may be lower. Which brings us to getting the flaps retracted, and how.

With that positive rate of climb-and only then-begin to retract, but not suddenly stow, the flaps. Presuming full flaps have been deployed, we always prefer to remove about half of them first, let the airplane stabilize, and only then retract them fully. This works well whether the flaps are manual, hydraulic or electric.

There are a number of reasons for this two-stage flap retraction, not least of which is preventing the airplane from sagging back to the runway. Presumably, the runway is where you dont want to be, or you wouldnt be going around. Why risk getting closer to it than you need? Instead, “milk” them up (where this reference came from, we dont know…) a notch at a time.

Finally, for those flying folding wheels, retract the gear, accelerate to whatever speed you want and move on to dealing with what went wrong.

So, again, PPFG: Power to arrest the descent; Pitch to establish climb; Flaps, only after gaining altitude with a positive rate of climb; Gear stowed.

Once stable and climbing, announce the go-around-if you didnt do that already-and, once clear of the runway, rejoin the pattern. Or…make a new decision.

Regardless of how diligent you are about checklists, this is a “normal abnormal” procedure, the practice of which until its rote muscle-memory-driven routine can greatly improve execution. Remember, going around is a successful decision-not a failure-that lets you survive to try again. But, now you have a new decision: Re-enter the pattern and try again, divert to a nearby airport with more suitable conditions or go somewhere to loiter and wait out whatever caused you to go around.

What you do after youve successfully executed a go-around depends on the reason you opted to abort the last approach. By the time you make the go-around decision you should already know why youre going around. If the reason had to do with traffic on the runway, it probably wont be there next time. If it involved adverse conditions-like a gusty crosswind-it likely will be there next time.

If you were the problem, you get to correct the mistakes on the next attempt. That means hitting the right altitudes, making the turns at the positions appropriate for conditions, crabbing as needed to counter a crosswind, and managing final with power on a constant-airspeed descent.

Flub the approach a second time and you should move into diverting mode. What do you next take into consideration? Well, a divert fields proximity and runway length should be top priorities, particularly if youre ending a long flight and fuel is a concern.

And thats the first factor to weigh against any alternate: Is fuel sufficient to get there and endure another go-around? After all, there is no guarantee against facing another go-around elsewhere-short, that is, of opting to seek forgiveness later and land on a taxiway, adjacent grass or some other similarly decision likely to be viewed dubiously by our friendly aviation agency.

And think hard about heading to an airport with more-challenging conditions than what you decided to abandon-say, one with a shorter runway when length has been the issue.