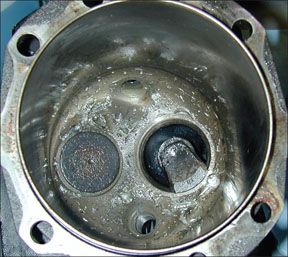 Engine failure. Aside from fires, its the airborne emergency pilots fear most. We debate the wisdom of flying single-engine airplanes at night, on instruments, through mountains or over water, heralding a second engine as the answer to these risky behaviors. Some eschew even piston twins, favoring turbine equipment instead. Whole industries have grown up around engine management techniques and technologies meant to reduce the chance of an engine failure.

This begs two questions: First, what really causes engines to fail? Second, what can we do that is effective in preventing engine failures in our airplanes?

Why Engines Fail
Detonation. Preignition. Cylinder cracking. Crankshaft fatigue. Valve failure. These are the things we debate about engine failure, and rightly so-in many cases we have no control over these types of causes. Cylinder overheat. Shock cooling. Changes at the first power reduction. Rich-versus-lean operation. These are things we can usually control. What does mishap history have to say about the various causes of engine failure?

To answer this question I looked at every NTSB mishap report in calendar year 2000. Why 2000? First, its far enough in the past that all mishaps have been as fully investigated as theyre likely to be, with the results posted on the NTSBs aviation mishap Web site. Second, 2000 was a year when the economy was still pretty good, and the last full year before the Sept. 11 terrorist attacks that temporarily put a big dent in general aviation operations. Third, although I hope eventually to extend the scope of this study to cover many years, reviewing even a single year was frankly a daunting project.

Calendar year 2000 saw precisely 400 NTSB reports of engine failure among production airplanes (unknown engines, installation details and modifications variables made me think it wise to eliminate Experimentals from the study).Likewise I excluded helicopters and large transports from my review. Of the 400 reports, 40 involved agricultural aircraft. Agplanes operate in a high-stress, often dirty environment, an almost military use quite different from the rest of general aviation. Running the risk of alienating aerial applicators, I removed agplane engine failures from the study to get a better feel for the nature of engine failures in more typical aircraft. (see the sidebar for agplane engine failure statistics). That leaves 360 reported engine failures from the year 2000. Coming back to our questions, what caused these events, and what can we do about them?

Fuel exhaustion: Fuel exhaustion means all tanks aboard the airplane are empty. In 70 of the 360 reports the pilot simply ran out of gas. Very often, the failure happened within sight of the destination airport.

Fuel exhaustion usually results after a complex string of decisions and circumstances that ultimately leave the pilot no way out. Very often, according to the NTSB, the pilot eventually knew he/she was in trouble before the tanks ran dry. Recognizing this, were reminded to take fuel state into account whenever a trip deviates from the preflight plan, and every time we choose to fly past an alternate airport.

The pilot failed to visually check all fuel levels during preflight, and cockpit fuel indicating systems were inaccurate or inoperative.

The pilot decided not to deviate to an alternate airport for fuel after encountering strong headwinds, resulting in fuel exhaustion just short of the destination airport.

The pilot was unable to locate the destination airport in dark night conditions.

As an instructor knowing how poorly power and mixture management seems to be understood in the pilot community, I suspect that an expectation of achieving book fuel flows while using something other than book leaning techniques may also contribute to the fuel exhaustion record if the pilot employs rich-of-peak-EGT methods.

Fuel starvation: In this situation, fuel is available in one or more tanks, but for some reason the fuel doesnt make it to the engine. Many reports prove the wisdom of limitations against takeoff or landing while burning fuel from auxiliary tanks. For purposes of my study fuel starvation excludes mechanical causes, with one exception-worn fuel selectors when investigation determined the selector did not provide a positive detent, and was arguably unairworthy but thought to be compensatable by the pilot.

Given these criteria, there were 56 reports of attempted takeoff or landing using auxiliary fuel, or failure to properly switch to a tank with useable fuel when exhausting the fuel from the source currently in use.

Frequently repeated examples from the NTSB:

Fuel starvation precipitated by the pilot’s continued use of the fuel selector valve that was not seating in the detents properly, when the selector slipped out of position.

The pilot’s mismanagement of the available fuel supply, resulting in a loss of engine power due to fuel starvation.

Running a fuel tank dry, intentionally or not, and inability to restart the engine on a remaining tank.

Failure to engage the fuel boost pump during restart in accordance with the aircraft owner’s manual.

Reading individual investigative reports, it appears that all the factors that lead to fuel exhaustion contribute to fuel starvation as well. If combined with undue delay in recognizing an engine failure, an improper response, or lack of familiarity with systems in the airplane being flown, then an otherwise recoverable fuel-related engine failure can end in a mishap. Take some time to read the Normal Procedures, Emergency Procedures and Systems Description sections of the Pilots Operating Handbook for the plane youll fly, remembering that different iterations of the same model airplane may have radically different design features and operating requirements.

Fuel contamination: The third variety of pilot fuel mismanagement is failure to remove contamination from fuel tanks prior to flight. With some aircraft, its embarrassingly easy to overlook one or more fuel sumps before flight (a Beech Baron I flew required sampling at 10 locations). Water, rust and delaminating fuel cells brought down 29 airplanes in 2000, according to the NTSB.

In most cases the airplane had sat out overnight in moist air, inviting condensation in the tanks-theres good reason were told to completely fill the tanks on the ground to avoid this. In a few instances the airplane was being flown cross-country for the first time after being grounded for months or even years. This suggests a thorough purging of fuel tanks for long-sitting airplanes before fueling and flight, and a test flight over the airport, testing all fuel tanks, before venturing away from the field on a ferry flight.

Improper Maintenance
Heres a scary thought-33 of the year 2000 engine failure reports resulted from mechanic error, during engine work or overhaul. Here are some examples:

The mechanics failure to ensure the throttle linkage was secure.

Failure of the internal cam gear in the remanufactured engine.

Improper maintenance adjustment to the float valve retractor clip of the carburetor.

Improper maintenance and adjustment of the engine magnetos, resulting in a loss of optimum performance.

Improper engine installation resulting in a fuel leak at the main fuel line fitting to the carburetor.

Fatigue failure of the crankshaft due to improper overhaul procedures

Fatigue fracture and separation of the fuel injector line due to failure to comply with an Airworthiness Directive.

In-flight oil leak due to the deterioration of oil filter adapter plate gasket material, and the supplier’s distribution of inadequate material.

So how can we deal with invisible, maintenance-related engine failure?Theres no clear defense, but these ideas can help:

Use only reputable shops and overhaulers.

When reusing engine parts at overhaul, as opposed to using factory rebuilt or new, dont use parts that are barely within specifications.Remember, they need not only be in spec at the time of installation, they should be expected to remain within spec with normal wear all the way to the next engine overhaul.

Get very familiar with the look of the engine compartment, and diligently investigate anything out of the ordinary. Keep the compartment clean and explain any oil or fuel leaks.

Absolutely comply with all Airworthiness Directives, and consider compliance with voluntary Service Bulletins from the manufacturer. Ask experts on your engine type if you have any doubts about the need for a specific bulletin-type clubs and other aircraft owners groups are a good resource. The FAA makes this your responsibility-not your mechanics.

Make a test-flight condition check of the engine, over the airport, then land for another visual check under the cowling before venturing away after any engine work.

Monitor engine indications on every flight, and look into abnormalities before they grow into emergencies.

Carb Ice
The next most common known cause of engine failure in 2000 was carburetor icing. Twenty-three engine failures were attributed to this phenomenon, and its possible a percentage of the unknown cause reports had a carb ice component (see below).

Contrary to the way were taught to use carb heat, primarily when reducing power for landing, most carburetor icing failures happened in cruise. Carb heat needs to be applied any time the air is moist, and the outside air temperature is such that temperatures within the carburetor are freezing.Its a much more complex issue than most pilots realize. See the sidebar on the previous page.

The Unknowns
Fifty-three of the years engine failures resulted in an unknown or undetermined cause. In three instances the airplane was lost at sea and never recovered, making a determination impossible. Causes from this column might be added to any number of others. I imagine carburetor icing might pick up a few extra reports from the undetermined category. Its noteworthy here that, except in the case of unrecovered airplanes, there is no indication of a mechanical cause in these investigations.

Okay, What Broke?
This leaves 96 engine failure investigations. One of those revealed an attempted takeoff with the auxiliary fuel pump on High, contrary to published airplane limitations; the engine flooded and quit. Ninety-five reports involved failure of an engine component with no indication of improper maintenance:

Connecting rod failures figured in 10 of the incident reports.

There were eight valve failures; seven exhaust valves and one intake.

There were three engine fires, and two failures of turboprop reduction gears.

Induction ice and carburetor failure each accounted for three reports as well. Two of the carb failures involved fuel floats saturated from decades of service.

Finally, a couple of notes. First, the unknown category is a wild card that might significantly alter these assumptions if we knew their causes.Second, this is not a definitive study: A much longer-term sampling will provide greater accuracy. But, its a good snapshot of 2000s engine failures.