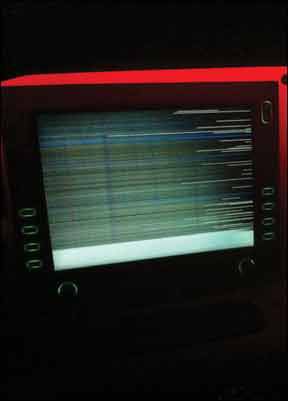 Among the first things pilots learn is what to do if something goes wrong. Instrument pilots get to learn what to do when instruments or the systems powering them fail and how to get back on the ground with what’s left. Back in the days when each instrument was a separate, physical thing instead of a software construct presenting symbols or alphanumeric data, their presentation was relatively well known and predictable. These days, however, those same instruments often have been replaced with what is essentially a computer screen. What happens when it fails?

First, I’m going to tell you that this is one of those things you almost certainly are never going to have to worry about. But like an engine failure at night in IMC over water while picking up ice, it’s one of those that, if it does happen, carries with it some serious consequences. So it’s a really good idea to think about and practice for the scenario where your glass cockpit display goes partially or completely dark, so you don’t find yourself having to try to figure out what to do without a safety net if it happens to you.

MTBF
One of the great selling points of glass cockpit displays is the mean time between failures (MTBF)—or average number of operating hours an individual unit should be expected to work before a total outage—is astronomical. Garmin, for instance, advertises a MTBF of 10,000 hours for the G1000 system. The published MTBF figure is, however, related to the solid-state “gyro” system.

In many cases, if the PFD fails, its information will automatically appear on the multifunction display (MFD)—the so-called reversionary mode. Reversionary mode, too, is a form of partial-panel flying, if you’re very accustomed to using the large MFD moving map for position and situational awareness, weather tracking and engine monitoring. Flying by reference to primary flight data on the MFD probably warrants a little practice as part of your recurring training regimen.

A big unknown is what might happen to MTBF as glass cockpit hardware ages, especially in the training fleet that is usually not hangared, but tied down outside (which includes a surprising percentage of all glass-cockpit airplanes). Even among professionally and owner-flown airplanes stored in environmentally controlled hangars, years of use are bound to have an effect on the hardware. For reference, try flying with an early Garmin GNS430 that has been in frequent use for a decade—you’ll probably find turning the knobs doesn’t always have the desired effect the first time. My point is that the older the glass cockpit equipment, the more likely (less unlikely?) glass cockpit failure will likely be. For a summary of the different failure modes a PFD may present, see the sidebar at the bottom of page 19.

Habit Patterns
So let’s concede there is a chance the glass screens may malfunction or go completely dark, and the longer the plane flies the more likely this may be. In “steam-gauge” airplanes (hey, most pilots are still flying that way), loss of a single instrument is fairly easily countered by flying with backup instrumentation right in front of the pilot. Further, the information is being presented exactly as the pilot is used to seeing and using it—with the exception of whatever had been lost.

For example, if the attitude indicator failed, the pilot would fall back to using supporting flight instruments for pitch and bank information: the altimeter, vertical speed and airspeed indicators, and the heading indicator and turn coordinator. The pilot knew exactly where to look for the information (where he/she always looked), and it was displayed in exactly the same way it had been on every other instrument flight the pilot made in that airplane—and probably other airplanes as well—all the way back to primary instrument training. The laws of primacy (what you learn first you learn best) and practice (what you practice the most makes the most sense) have reinforced what you need to know for partial panel flight.

But what if all your experience the last few years has been with a wide PFD augmented by airspeed and altitude tapes? What if all your instrument experience is in glass-cockpit airplanes? If presented with a “red X” scenario (some or all of the flight instrumentation is inoperative, but other portions remain active), what will the laws of primacy and practice do to your chances of survival? You have to incorporate remotely mounted instruments displaying information in unfamiliar ways (especially airspeed and altitude). Will you be successful?

About 10 years ago, Middle Tennessee State University’s flight department looked into this. The MTSU had recently been the first university flight department in the U.S. to operate a fleet of Diamond DA40 aircraft equipped with Garmin G1000 panels. Not content to simply transition instructors and students to the new airplanes, MTSU’s department (then under Dr. Paul Craig) undertook a scientific study about training pilots in technologically advanced airplanes, a combined VFR/IFR syllabus to take a new pilot from zero hours to an IFR rating in a single program, with a single checkride, and incorporation of scenario-based training (SBT) from Lesson One. A synopsis of the results [PDF] is at tinyurl.com/avsafe-mtsu.

At the time the report went public, I asked Dr. Craig about MTSU’s experience with pilots in partial-panel flight. He told me MTSU specifically looked into this question. A control group of students that was trained in traditional-instrument Cessnas was pitted against students who flew the Diamonds from the beginning. Dr. Craig reported both groups did equally well in successful partial-panel flight. So at least in this case, research shows a glass cockpit-trained pilot can incorporate steam gauge instruments to survive a PFD failure.

However, an important point is that both groups of pilots had received significant, recent training in partial-panel flight prior to the test. This suggests—just as is the case with round-gauge pilots when the attitude indicator or another instrument fails—it takes training, and recent practice, to remain partial-panel proficient.

Red-X Action Plan
One or more red-x indications may occur without warning if a system-driving failure occurs. If you’re flying along and are faced with a red x:

1. Using the backup instrumentation, focus on flying precisely straight and level in unaccelerated flight. Many AHRSs may reset themselves in flight after a momentary glitch. But it may take from 45 seconds to as much as two minutes or more of straight and level, unaccelerated flight for the system to reboot, depending on the equipment installed and the nature of the problem. Great partial panel skills will help get you this restart attempt.

2. Manually turn on any backup instrumentation, if it is not already on or it does not come on automatically in your airplane.

3. Follow any emergency procedure for instrument failure that may exist in your Pilot’s Operating Handbook or the POH Supplement for your installed equipment.

4. Turn on pitot heat and activate an alternate air static source, if you suspect icing or some other blockage of the pitot/static system has affected your ADC.

6. Land at the first suitable airport. Partial panel flight is not intended for completing a planned trip all the way home or to destination.

2. Manually turn on any backup instrumentation, if it is not already on, or it does not come on automatically in your airplane.

3. Follow any emergency procedure for electrical failure that may exist in your Pilot’s Operating Handbook and/or the POH supplement for your installed equipment.

4. Activate a backup alternator or generator, if available.

5. Activate a handheld GPS for navigation, if it’s available but not already on, and establish radio contact with a handheld radio as necessary, if available.

8. Land at the first suitable airport. Partial-panel flight is not intended for completing a planned trip all the way home or to destination.

It’s easy to assume that glass cockpit systems are infallible. Most are very new (new avionics equipment rarely fails and when it does, installation error often is at fault), and the systems that drive them are extremely reliable. But a partial-panel situation is still always possible in glass-cockpit airplanes. And the likelihood of system outages or failures probably will increase as glass-cockpit airplanes amass on/off flight cycles and calendar age.

The new age of PFDs and digital equipment has dramatically reduced the chances of failure. But it’s still our job as pilot-in-command to have a practiced plan for when an unlikely failure occurs.