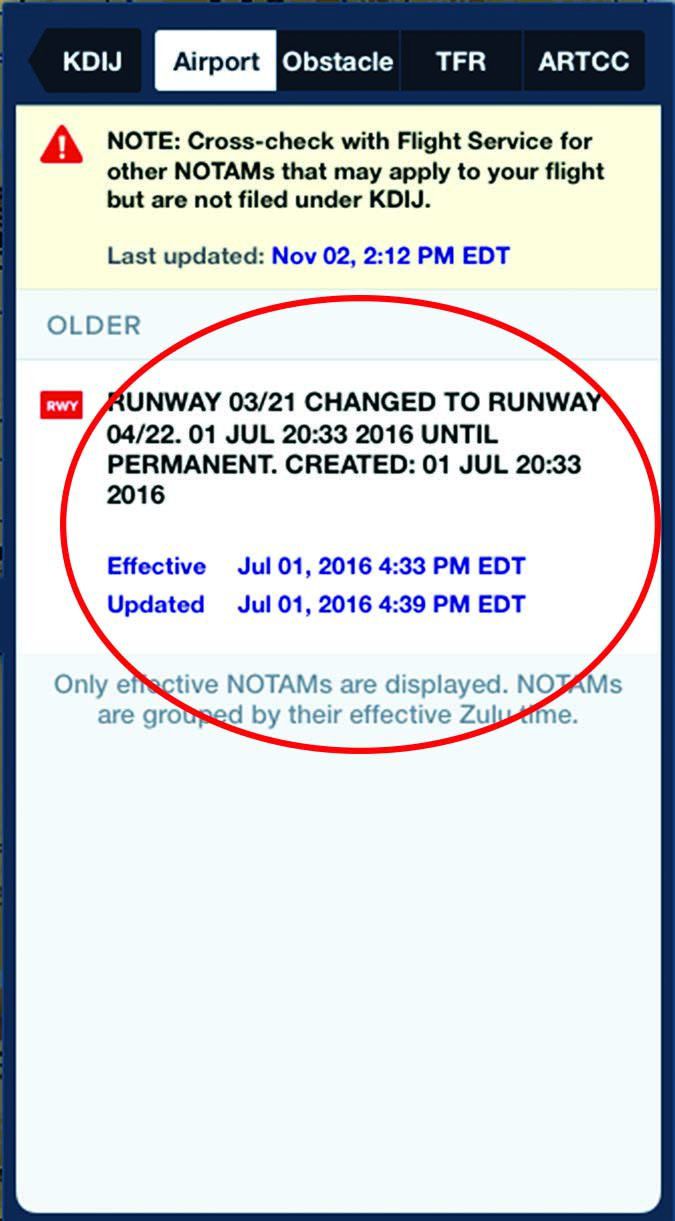 Everyone aboard the Beech Model 17 Staggerwing in which I was a passenger had been to the Driggs, Idaho, airport (KDIJ) dozens of times, perhaps even hundreds. Driggs Reed Memorial Airport is one of the more scenic airports in the country, much less Idaho. But as we approached, we could tell something was amiss. The pattern was busier than usual, and we heard a call for Runway 22. All three of us knew with confidence that Driggs’ single runway is laid out 03-21, but a second and third plane called in approaching the same, seemingly wrong runway. If it had been just one pilot, we would have ignored it and chalked it up to an out-of-towner’s mistake.

I looked at the electronic flight bag (EFB) app on my recently updated iPad. It showed an extended centerline icon projecting Runway 03-21. When I pulled up the current airport diagram, it also showed Runway 03-21. But then I noticed the Notam icon at the top of the display. A click on the icon showed that Runway 3-21 changed to Runway 4-22 a couple of weeks earlier. Related screenshots are below. Equipped with this new information, our Staggerwing’s pilot turned and made the correct position call for right traffic for the newly designated runway. A plane full of old-timers got schooled by out-of-towners using the correct (albeit new) runway designator.

How Complicated Can it Be?

Our mistaken runway call on approach at Driggs was the first time I’ve ever seen a runway designation change at a familiar airport. I was a bit surprised to see the change was not timed with the update of the AF/D, and further surprised to find my EFB app still used the old numbers for drawing extended centerlines despite having current data. It’s an election year, so I am used to poor-quality information, but it seems reasonable to presume runway number changes—the runway paint, approach plates, AF/D, airport diagrams and EFB data—will all roll out in an orderly sequence. It also seems reasonable to presume the new information’s propagation would be timed to land in sync with chart and AF/D publication revision dates, to minimize confusion. As it turns out, the FAA tries, but it doesn’t always work that way.

At large airports with numerous taxiway signs and approaches, runway changes will literally take place overnight to avoid contradictory or confusing information. But at smaller airports, the changes can lag because differing FAA offices can be involved. The airport division handles some aspects, the procedural folks deal with others. So even though the runway at Driggs was painted in June, and the Notam changing the runway designation was effective at midnight July 1, as I write this article in October, the published RNAV (GPS) procedure still uses the old Runway 03 designator, as does the updated Jeppesen database for my IFR-certified Garmin GNS 430W. Both of these data sets are valid through November 10. On the upside, when I checked the runway diagram for this article, it switched from the old number to the new one. And the RNAV (GPS) Runway 04 procedure, obviously with an update to the number painted on the pavement, goes into effect November 10.

We all should know by now that runway numbers are based on its orientation relative to magnetic north and rounded to the nearest 10 degrees. Apart from procedures, paint and airport signage, the actual magnetic heading of the runway might not seem to matter much. But if you are flying IFR, or under ATC control, and are given the direction to “fly runway heading,” should you fly a heading within five degrees of the two-digit runway number.

According to FAA Order 8260.46, Departure Procedure (DP) Program, pilots instructed to maintain runway heading should fly the “magnetic direction that corresponds with the runway centerline extended, not the painted runway numbers on the runway.” Pilots cleared to “fly or maintain runway heading are expected to fly or maintain the published heading that corresponds with the extended centerline of the departure runway (until otherwise instructed by ATC), and are not to apply drift correction.”

The example given in the FAA’s Order is a runway centerline aligned 044.22 degrees, for which we’re to apply standard rounding procedures and fly 044 degrees. Given this example, the FAA expects operators at towered airports to not only operate to half a degree of heading tolerance, but we’re supposed to look it up, also. In the real world, we note the heading indicator’s value once we’re lined up on the departure runway, and fly that heading once it’s reasonable to do so. Heading bugs, extended centerline charting and magenta lines also come in handy when flying runway heading.

In The Confusion Zone

Confusing the actual runway numbers can be another safety issue. In the U.S., unlike the rest of the world, we drop the zero from single digit runway numbers. For example, it is acceptable and common to call for “runway four” not “runway zero four.” Dropping the word “zero” can cause some unclear readbacks when U.S. pilots fly internationally, and vice versa.

Reciprocals also easily cause confusion. My home airport has Runway 2-20, but it is not uncommon for pilots on the CTAF to call out “zero two” when they mean “two zero.” I have also heard controllers screw up and issue landing clearances for the wrong runway and pilots reading back the wrong runway assignment. When the runway headings are reversed, you have a formula for putting two planes in the pattern on a collision course. In actuality, this problem really rears its ugly head when the wind changes and the active runway switches. So far, I have always caught these problems on my readback, but if you haven’t operated at an airport with 2-20, be prepared for the confusion. We are literally rooting for the day our runway heading changes. The other evil reciprocal runway is 13-31, which is not quite as confusing, but subject to similar issues.

Another way magnetic variation can affect safety is cumulative impacts. If you are crossing the continent—either from east to west, or west to east—the cumulative variation you experience can be as much as 30 degrees. We have lots of automation that takes care of this pesky little detail for us. However, if you suffer a major loss of electronic systems, knowing the facts about magnetic variation and how to deal with it can be important. Besides, what kind of engaged pilot wants to always be a slave to a magenta line?

Why the Numbers Change

The magnetic poles are always on the move (see page 5), and for the past few decades, the north magnetic pole has been doing so at a greater rate. The National Oceanic and Atmospheric Administration and the National Geodetic Survey study these shifts in magnetic variation and publish the changing values every five years. The upshot is that the isogonic lines showing magnetic variation on sectional charts shift more dramatically each time these updates are applied.

We asked the FAA how runway number changes propagate through the charting system. Brandon Sutton, AeroNav Program Specialist at the agency’s ATO Western Service Center, responded in detail, which we edited only lightly for style:

Runway number changes can be difficult to sort out. In a perfect system, the runway repainting and the amended procedures would happen on the same day. Unfortunately, it normally doesn’t work that way.

In the case of Driggs, the runway was renumbered prior to the proposed chart date of the amended procedures. This can happen for many reasons: funding availability, construction company availability, weather. Because the runway was renumbered prior to the publication date, a local Notam was issued advising airmen of the change until the procedures can be amended. In this case, the airport diagram has not been updated because the runway data is still pending the November 10, 2016, publication date.

If the runway renumbering had been published on the airport diagrams prior to the procedure amendments, then the approaches would be unusable due to computer coding issues with the onboard Flight Management Systems (FMS). I am not a pilot, but this is how it was explained to me:

Let’s say Runway 3/21 was changed to Runway 4/22 in all the databases. The FMS would receive the update of the new runway numbers but still have “RNAV GPS RWY 3/21” as the approaches. When the pilot goes to select the “RNAV GPS RWY 3,” the FMS would stop them and say the runway does not exist, therefore the procedure cannot be flown.

Outside of completing the repainting and publishing on the same day, the most correct way to do a renumber would be to publish the procedures first, then finish the painting. By doing it this way, the FMS is updated with both the new runway numbers and the new procedures to those runways. Of course, a Notam would still be issued advising airmen that Runway 3/21 is now 4/22, so either way, a Notam is out there until repainting is done or the procedures are published.

What this means for pilots is the conversion from true to magnetic, and magnetic to true, is rife with opportunities to confuse and flip the values mentally. Two compass roses (see figure) might help you visualize and lock in the difference between E and W variation. They show Seattle, with 16 degrees E variation, and Boston, with 15 degrees W variation.

There is a formula that may help you plan a cross-country trip. A favorite mnemonic is: True Virgins Make Dull Companions, Add Whiskey.

The formula starts with the understanding that we are converting from true to magnetic, so we add W variation, but subtract E variation. If we wanted to convert from magnetic to true, just flip the arrow and do the opposite operation, subtract W variation, then add E variation. If you can remember the mnemonic and the formula, you will never forget how to factor for magnetic variation. “East is least,” another way of saying the same thing, also is a helpful memory aid.

And don’t forget magnetic deviation, compass error induced by how it’s installed in your particular aircraft.

Straighten Up and Fly Right

When it comes to magnetism, it is easier than you think to get turned around. That goes double for airports whose runway designations have changed or are about to, and triple if your airport has the misfortune of migrating to one of the dreaded reciprocals of 2-20 and 13-31. Even if the big one hits and the poles flip, you will be thankful for your heightened understanding of aviation magnetics.

Mike Hart is an Idaho-based flight instructor, and proud owner of a 1946 Piper J3 Cub and a Cessna 180. He also is the Idaho liaison to the Recreational Aviation Foundation.