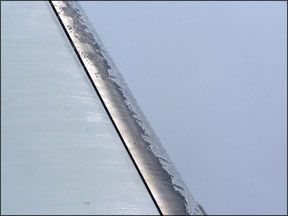 Risk-and the management thereof-is a diffuse concept, for it remains true that one mans risk is anothers Saturday afternoon recreation. But its also true that in order to place degrees of risk into categories remotely capable of being ranked requires as much information as it is possible to have. It applies to airplane systems, to stick and rudder skills and

above all, to weather.

Weather has always been the stickiest thorn in the FAAs concept of “all available information.” Even in the era of five-minute Nexrad loops and ever more sophisticated ice prediction products, theres occasionally a large disconnect between what is expected to happen and what is really happening. The advent of real-time weather data in the cockpit has reduced the surprise factor, but it hasnt eliminated it. And it cuts both ways-having lots of information thats just wrong can be worse than having no information, and it can lure you into a decision you might not have otherwise made.

The test case for this occurred for us on a recent long swing through California and the Pacific Northwest, where icing season never seems more than a few thousand feet away. The purpose of the trip was multi-fold, but high on the list was testing Garmins new aera line of portable navigators. Since 2005, Garmin has steadily improved the ability of its portable product line to deliver real-time weather and XM WX weather has added more weather products. Better equipment and better products should add up to better decision making and smarter risk management, right? Yes, definitely. But there are limits.

As is often the case in the Northwest, a largish low was dragging a cold front in from the Pacific. The visible moisture satellite loops showed a train of moisture from the northwest, meaning lots of rain and, if cold enough, ice, too. The icing charts called for freezing levels as low as 9000 feet, but ranging higher into central Oregon and Washington in a part of the country where the MEAs run to 11,000 feet and higher. Our destination, Aurora, Ore., is about 60 miles inland from the coast and 20 miles south of Portland. The Nexrad loops showed lots of green and yellow rain around the destination with the Metars, generally confirming the forecasts of 3000-foot ceilings, with layers to unknown tops and visibilities of three to five miles. Except for the icing, this is perfectly doable, light IFR weather.

With ice in the forecast and high MEAs, why mess with the mountains? After a fuel stop in California and just as we hit the cloud shield in southern Oregon, we turned west toward the coast, where there were no concerns about the MEA and the freeze level converging. We would have to sweat crossing the Cascades at 11,000 feet to meet the off-airway MEA, but the terrain exposure would be short.

And heres where having XM weather wasnt nearly as helpful as we thought it might be. The Nexrad showed all of the precip was well north of us, there were no icing Pireps in the area and such as it was judgeable from the echo tops and satellite views in the region, tops should have been about 10,000 and the freezing level at 9000 feet. Worst case, we pick up a little rime, climb out of it and descend into warmer air west of the high terrain.

All of that was mostly wrong. The freeze level was closer to 8000 feet, the tops at nearly 14,000 feet, and there was enough moisture to produce light to moderate large droplet icing with runback-just the kind of stuff to sap performance, and it did just that. The indicated airspeed fell off by 10 knots and by 13,000 feet, we could no longer climb to get above tops that were clearly visible but unreachable. The airplane had nothing left to give.

Having ready access to Metars helped. A couple of key jabs brought up North Bend, Ore., right on the coast, reporting 3000 scattered and 5000 broken with a surface temperature of 53 degrees-a solid gold bolt hole. Further south, a couple of stations were reporting similar. We inched carefully across the Cascades and coast range, and took the lowest possible MEA as soon as Seattle Center would authorize it. Below 9000 feet, between layers, the ice abated and slid off the airframe entirely by 8000 feet.

With the coast clearly in sight, we turned north along the beach and plunged back into layered clouds at 6000 feet. According to the freeze level chart freshly called up from XM, the freezing level was supposed to be 8000 feet, rising to 12,000 feet as we motored northward. The reality is that it was 31 degrees at 6000 feet and we were already at the MEA with whiskers or rime again forming. With the sun breaking intermittently through the clouds, we surmised that this time, with a clean airplane, we could get to an ice-free altitude above the layers.

By 11,000 feet, it was clear this wasnt going to work. The ice worsened and went from nuisance rime to light to moderate runback mixed icing. Now what? After a long day of flying and with no hope of getting any work done at the destination when we would arrive after 5 p.m., we did the only sensible thing: a 180-degree turn and a diversion to North Bend for a night in a hotel. In 30-plus years of flying-with lots of ice in unprotected airplanes-this was only the second time I have ever diverted for ice. The next morning, when we arrived at our destination after climbing easily to 14,000 to clear the layers, a local told us one option was to scud run up the valley under the clouds. Thanks, but no thanks.

So was having a torrent of datalink weather available at our fingertips a help or a hindrance? It was both, actually. A persistent trap in using datalink is that because the satellite loops and Nexrad imagery represent real time conditions with a nice pretty color picture, there is an almost unavoidable tendency to assign the equally attractive forecast products the same credibility. Looking at XM WXs freeze level chart, for instance, the isotherms look so precisely and purposefully drawn that the temptation is to assume that in another 40 miles, just south of Albany, say, the temperature will be above freezing at 12,000 feet.

In fact, that proved to be wrong by about 5000 feet or more. It took a certain self-shaking of the lapels to realize that. Second, assessing tops with datalink weather can sometimes be a fools errand. Theres enough reliable data there to make an oh-by-the-way observation, but not enough to bank a go/no-go decision. As far as icing is concerned, Nexrad-based tops estimates are just background noise.

Nexrad can also lead one astray in at least one other aspect: In mid-afternoon, I noticed what appeared to be a dry slot working its way into the moderate precipitation marching in from the coast. This I took to mean that the clouds would be less moist, and thus the icing potential lower. But low is not the same as no. Although the layers had that breaking-up-after-a-storm look, it was cold enough and there was enough orographic lifting to make what appeared to be benign clouds unflyable in an unprotected airplane.

Last, Pireps. The new Garmin, which we were testing on this flight, places Pireps under a dedicated touchscreen tab on the weather page. They couldnt be easier to access. But there werent any, other than the Pirep we passed along, reporting light-to-moderate mixed icing over the Cascades. A United 757 reported light chop at FL350; fat lot of good that does to an airplane beating around in the clouds three miles below.

The equation resolves to the positive, however, because Nexrad imagery all but takes convective weather off the table. As long as you dont get jiggy trying to penetrate a hole in a squall line, datalink Nexrad earns its keep. Metars and, when available, Pireps, are also invaluable for on-the-fly decision making.

To avoid snatching defeat from the jaws of victory, however, its critical to resist the temptation to believe that forecasts are another version of reality, and the fact that they have timestamps and nice colors makes them “realer” yet. Encouraging forecasts-or any forecasts, for that matter-should be significantly downweighted as a consideration in potentially threatening circumstances.

If datalink weather as a risk management tool has a significant weakness, it would be keeping on top of icing. The tools are still too coarse and the stakes too high to place much faith in the technology, although advancements may eventually improve this. Until it does, the tired old axiom about ice being where you find it is as true as it ever was, datalink or not.