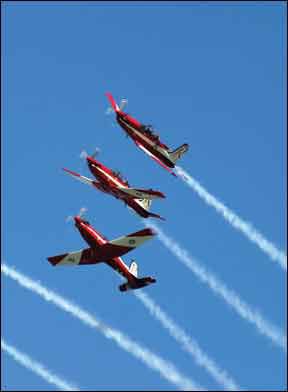 I watched a demonstration by the pilot of a U.S. Air Force F-22 Raptor on one of the nicer weather-days at this years Sun n Fun International Fly-In and Expo (the day before the tornado hit). The Raptors most unique characteristic-from an observers standpoint and in addition to its efficient conversation of fuel into noise-is its ability to maneuver at extremely high angles of attack-maintaining a constant AoA of over 60 deg. in sustained flight.

Watch an F-22-or any other high-performance aircraft-maneuver, however, and you may notice an interesting pattern. Any time the fighter changes attitude under a G-

load, the pilot does so incrementally. He or she changes pitch, then changes bank, or the pilot changes bank and then changes pitch. You never see a radical pitch and bank change simultaneously. Watch the other flight demonstration pilots and teams, from local aerobats to Julie Clark to the U.S. Navys Blue Angels, and youll see the same pattern.

The phenomenon to avoid is called “rolling Gs.” Changing bank angle while simultaneously changing G-load creates a differential in the loading of one wing (or one stabilizer) relative to the other. This in turn applies a twisting force on the attach points that will be much more powerful than if the G-load is applied symmetrically on the airframe.

Rolling G limits do not appear in most civilian airplane Pilots Operating Handbooks. For example, however, the USAFs Northrop T-38A is limited to +6.0/-2.5G at 3000 pounds of fuel on board (FOB) when symmetrical, but +4.3/-0G in unsymmetrical flight (where “unsymmetrical flight” is defined as “full aileron deflection”). The G-load envelope changes with reductions in fuel weight. The Bellanca Decathalon gives a rolling G limit in its flight manual that is lower than its aerobatic G-load limitations. A reference standard is the FAAs small airplane certification rules in FAR 23, which define an airplanes asymmetrical flight G-limit for any given weight to be two-thirds of the symmetric G-load at the same weight for the same aircraft (FAR 23.349(2)(b)). In other words, if youre changing your rate of bank, you must be very careful about adding G-load.

Why does this matter to me?

Rolling Gs can affect any airplane. Recently the NTSB released a preliminary report on an accident that took place in March 2011 (its defined as an “accident” because the airplane-a V-tailed Beech Bonanza-suffered substantial damage in flight, although the pilot landed safely and no one was hurt). The pilot was cruising at 4500 feet, and was engaged in correlating the indications of two panel-mounted navigation receivers in the cockpit. He also had a handheld GPS mounted on the flight control yoke. During the correlation effort, the pilot noticed he was about to intrude into military restricted airspace. He initiated a turn to the right, with a bank angle estimated to be about 45 degrees, in order to avoid the restricted airspace. During the turn, the pilot referred to the GPS to ensure that he would clear the restricted area. When he returned his attention to the airplanes attitude, he noticed the bank angle had increased to about 75 degrees right-wing down, and the pitch attitude had decreased to about 20 degrees airplane nose-down. At that point, the pilot noted the airspeed was about 190 mph, which was in the yellow (caution) range of the airspeed indicator scale.

The pilot stated that he leveled the wings, and then initiated a pull-up. During the pull-up, he heard three or four “thumps” in rapid succession. After recovery to level flight, the airplane continued to “fly fine,” but the pilot was concerned about the thumps, since he had never heard noises like them in that airplane. The pilot then flew the airplane “gingerly” back to his home field, where he landed uneventfully.

On landing, an inspection found a diagonal wrinkle about two feet long, extending up and forward from the juncture of the fuselage side and bottom. The wrinkle intercepted the juncture at about the second bulkhead/former forward of the tail cone.

On the opposite side of the aft fuselage, the skin was crumpled and dented in the same general region as on the right side, but the deformation did not exhibit the linear pattern observed on the right side. On the lower aft fuselage, the forward bottom skin was separated from its lap joint with the aft bottom skin at the aforementioned bulkhead/former; the skin was torn from the fasteners, which remained in the bulkhead. The inspection did not reveal indications of pre-event damage or corrosion in the affected areas. A cockpit G-meter registered a maximum of about 2.5G and a minimum of about minus 0.7G, but the meters accuracy was not determined.

Three possibilities exist to explain the damage (which likely is enough to render the airplane uneconomical to repair): First is the G-meter was incorrect and the airplane experienced a much higher G-load than indicated (the type has a design load of 4.4Gs and an ultimate load of 6.6Gs).

Second, there might have been a pre-existing condition of some sort that reduced load-carrying capability or changed the balance of moveable tail surfaces enough to induce flutter at high speeds (the airplane in question is 55 years old, ample time for issues to arise due to improper maintenance or neglect).

Third, the pilot may have aggressively pulled up while still rolling out of the nearly vertical bank. As a result, the airplane may have suffered the effects of rolling Gs.

The FAA warns us about rolling Gs without making it terribly obvious. At least it does so on the Commercial Pilot Practical Test Standards (PTS) and supporting Advisory Circulars. Two similar “performance maneuvers” from the commercial syllabus teach us to avoid large, simultaneous changes in pitch and bank-and to avoid rolling Gs.

The lazy eight-“poster child” of the so-called “commercial maneuvers”-requires bank angles up to 30 deg. and pitch attitudes to just above the power-on stall, with a correspondingly low attitude on the “down” side of each turn. But the key in flying the lazy eight to commercial standards is making continuous, but very small, changes in bank and pitch. Although you are continually changing both pitch and bank throughout the maneuver, you are intentionally changing them extremely slowly.

Theres no rapid, big change in a properly flown lazy eight. In part, this is an attempt to teach pilots to avoid rolling Gs.

Contrast this with the chandelle, which also calls for changing pitch and bank to the same maximum values. Unlike the lazy eight, however, the PTS calls for a smooth but rapid roll into maximum bank, and a pitch up to maximum attitude, at the beginning of the maneuver. Tellingly, the proper technique for entering the chandelle is to roll to a 30 deg. bank angle first, then pitch to the maximum bank angle. No rolling Gs-just like the F-22, Julie Clark and the Blue Angels!

Chapter 9 of the FAAs Airplane Flying Handbook tells us “an important benefit of performance maneuvers [including chandelles and lazy eights] is the sharpening of fundamental skills to the degree that the pilot can cope with unusual or unforeseen circumstances….” The PTS and the Airplane Flying Handbook dont come right out and say it, but the techniques appear designed to teach, among other things, that big changes in bank and pitch should not occur simultaneously.

One At A time

Sometimes when flying, especially during incipient emergencies, we must do the right thing without thinking. This in turn requires we sufficiently practiced the right type of response so we dont aggravate the emergency and make it unrecoverable. Avoiding asymmetric G-loads even when were well within the certification envelope of our airplane is an example of having to get it right the first time.

With all this in mind, you now have a reason to include chandelles and lazy eights in your recurrent training regimen, even if you dont have a commercial checkride in your future.